The Main Directorate for Reconnaissance[1] (German: Hauptverwaltung Aufklärung, or HVA) was the foreign intelligence service of the former German Democratic Republic (GDR, "East Germany") and was an integral part of the GDR Ministry of State Security, commonly known as the Stasi. After the Stasi was disbanded in 1990, its mode of operation was revealed to the public and the HVA was subjected to broad interest, as well as intensive research, which falls under the responsibilities of the Federal Commissioner for the Stasi Records. The end of the HVA and the discovery of its internal structure, its methods and its employees was an exceptional event, which to date is unique in modern history, after World War II. The HVA is regarded as the most effective foreign intelligence service during the Cold War.

The primary mandate of the HVA was foreign reconnaissance (espionage), which included political, military, economic and technological intelligence-gathering. Among its other duties were activities against western intelligence agencies (by means of infiltrating their operations), preparing acts of sabotage, as well as the so-called "Active Measures" (distributing false intelligence) in the "Operational Sector Federal Republic of Germany", including West Berlin. 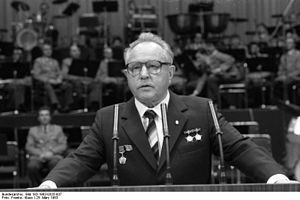 In the early 1980s, military espionage began to gain significance. The Soviet Union, the SED-led administration of the German Democratic Republic, and secretary of national security Erich Mielke expected paramount information in regard to the early discovery of Western war preparations from the HVA, in light of the rising tensions between the two Cold War superpowers.

Cooperation with the KGB

Optimal conditions allowed the HVA to provide its eastern "sister services", especially the KGB, the greatest amount of intelligence flowing out of the Federal Republic of Germany, which was the most significant European NATO member. The KGB was headquartered in Berlin-Karlshorst, the Soviet Union's secret service was located in Potsdam-Babelsberg, and in addition, liaisons were present to each district administration. Successful operations against NATO headquarters in Brussels, as well as some other Western European states, such as Great Britain also contributed to the HVA's significance. In the United States, on the contrary, the HVA was never able to break any ground, as the KGB operated there almost exclusively. (The significant inroads in the GDR's reconnaissance on, for example, the NSA originated from personnel stationed in West Berlin.)

In 1989 the HVA had 21 sections (Abteilungen) and 5 task forces (Arbeitsgruppen). In addition, there was the Headquarters of the HVA (Stab der HVA) and the Sector for Science and Technology (Sektor Wissenschaft und Technik) (SWT), responsible for technological espionage, whose responsibilities were spread across sections.

His predecessor was Colonel General Markus Wolf, who led the HVA over 34 years until 1986 and was held in high professional regard in the intelligence community. 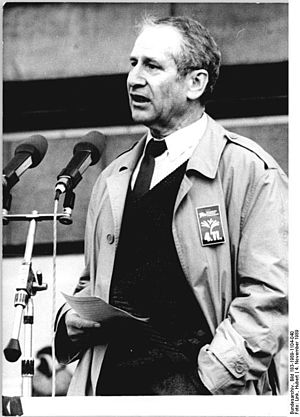 The head of the HVA had five deputies. In the last case, these were Major Generals Horst Vogel (1. Deputy), Heinz Geyer (Chief of Staff), Heinrich Tauchert and Werner Prosetzky as well as Colonel Ralf-Peter Devaux.

Initially, the HVA College, disguised as "Zentralschule der Gesellschaft für Sport und Technik Edkar André" ("Edkar André Main College of the Society for Sports and Vocational Training"), was initially headquartered in Belzig. Starting in 1965, it was incrementally absorbed into the "Juristische Hochschule des MfS (JHS)" ("Graduate Law School of the Ministry of State Security"), located in Golm (Potsdam), initially as a vocational training school. From 1968 on, it was called "Fachrichtung für Aufklärung der JHS" ("College of Reconnaissance of the JHS"), and was later renamed to "Sektion A" ("Section A"). The "Fremdsprachenschule des MfS" ("College of Foreign Languages of the Ministry for State Security"), also referred to as "Educational Department F", was attached to it. In 1988, the HVA College, including the College of Foreign Languages, previously located in Dammsmühle bei Mühlenbeck, moved to Lake Seddin in Gosen near the Berlin city limits, approximately 4.5 miles (3 kilometers) south of the city of Erkner. The backup bunker for the headquarters of the HVA was also located there. [2][3] In 1989 the college had approximately 300 employees and was headed by Lieutenant Bernd Kaufmann. It worked in close cooperation with "Dept. A XIX", and was structured into three Educational Departments:

The HVA had more than 3,800 full-time employees in 1989. Among them were, according to the agency's directory, approximately 2,400 professional agents and 700 deputies, 700 unofficial employees, and 670 special agents (Offiziere im besonderen Einsatz). In the course of the HVA's self-disestablishment, the number of employees rose at times above 4,200.

In the autumn of 1989, seven supervisors had a ranking of "General": highest-ranking associate was manager of the HVA, Werner Großmann, as Lieutenant General. Four of his deputies, as well as Harry Schütt (chief of counter-espionage) and Otto Ledermann (manager of the SED foundation of the HVA) were Major Generals.

The HVA associates regarded themselves to be the elite of the Ministry of State Security. A high degree of personal engagement, flexibility, performance, and primarily absolute loyalty to the SED was expected of them. Qualified employees of other Stasi departments, such as those with secondary educational degrees, knowledge of foreign languages, etc., could, as a reward for "remarkable achievements", be transferred to the HVA as needed, which was akin to a decoration. On the other hand, HVA personnel could, due to inadequate performance or following an investigation, be transferred to other departments of the Stasi, practically constituting a demotion.

Unofficial and other employees

The full-time staff of the HVA were complemented by the "unofficial collaborators" or "unofficial employees", the so-called IMs (Inoffizieller Mitarbeiter), the exact number of which is still not known. These were primarily GDR citizens with permission to travel to the West (the Reisekader; conversely, only a fraction of those with travel permission were IMs), residents of East Germany who were related to "functionally interesting" target persons in the West, couriers and instructors, but also thousands of residents of West Germany and West Berlin, partly in exposed positions in society.

The HVA was particularly interested in recruiting Western students who were visiting the GDR. These were young academics who were suitable for leadership roles and therefore particularly predestined for confidential information; they were developed over decades at a high financial and personnel cost, with the goal of placing them in high positions in the state and the economy, through which they gained access to secret information.

A famous example of such a recruitment operation was Gabriele Gast, who committed herself in 1968 as a student and rose to the rank of Regierungsdirektorin (Government Director) in the Bundesnachrichtendienst (Federal Intelligence Service), the foreign intelligence agency of West Germany. As a high-level source, she was led by Markus Wolf personally.

The actual sources of espionage operations in the West were not necessarily registered as IMs with the HVA (or the Ministry of State Security). In many cases, they were noted as Kontaktpersonen (KP) (contact persons), which reveals little about the degree of cooperation with the intelligence service.

The HVA's predecessor, the APN (Außenpolitischer Nachrichtendienst: Foreign Intelligence Service) resided in the early 1950s first in Pankow, then at the Rolandufer in Mitte.

The headquarters of the HVA was situated since the mid- to late 1950s in the building complex of the Stasi's headquarters in the Berlin borough of Lichtenberg. After completion of the new office buildings at the corner of Ruschestraße and Frankfurter Allee, the HVA established its base of operations there. (After 1990 an employment agency moved into a building on the site. The building on the Frankfurter Allee is used by Deutsche Bahn. A Deutsche Bahn company logo has been affixed and is easily noticeable.) The Operativ-Technische Sektor (OTS) was located in the Roedernstraße in Hohenschönhausen.

Former HVA director Markus Wolf asserted in front of a Bundestag committee investigating the activities of the Division of Commercial Coordination (Bereich Kommerzielle Koordinierung or KoKo) that at the end of his tenure (1986) the yearly financial resources of the HVA for operational purposes stood at 17 million East German mark and 13,5 million Deutsche Mark. It was not possible to conclusively refute or verify this statement. In individual HVA sections, there existed "black cash boxes" under the responsibility of the section or department head. Considerably greater amounts were made available for the secret procurement of equipment for section A VIII ("Operational Technology and Radio Communications") and for other recipients in the Stasi, the National People's Army or the East German economy; this money generally came from the Division of Commercial Coordination.

In 1951 the Außenpolitischer Nachrichtendienst (Foreign Intelligence Service) (APN) was founded, under the leadership of Anton Ackermann, disguised as the "Institut für wirtschaftswissenschaftliche Forschung" (IPW) (Institute for Economic Research). According to Markus Wolf, there were eight Germans and four Soviet "advisers" present at the founding on 1 September 1951 in Bohnsdorf in the borough of Treptow-Köpenick. The APN was subordinated to the Foreign Ministry of the GDR. The first leader was Ackermann, his deputy was Richard Stahlmann. The head of the "advisers" was the KGB officer Andrej Grauer, who, according to Wolf, was assigned by Stalin personally to this "reconstruction aid".

In 1952 the College of the APN came into being (the later College of the HVA), where mostly agents (known as "Scouts for peace" in Stasi jargon) were prepared for operations in Western countries. Towards the end of the year, Ackermann petitioned the ruling party's politburo to replace him, and Walter Ulbricht assumed direct control of the APN.