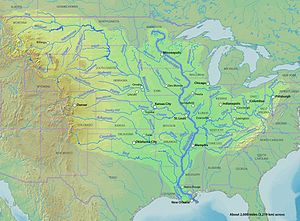 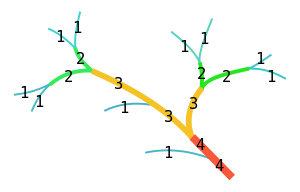 Strahler diagram. Only a segment of the main stem gets the highest number.

Hydrological classification systems assign numbers to tributaries and main stems within a drainage basin. In the Strahler number, a modification of a system devised by Robert E. Horton in 1945, channels with no tributaries are called "first-order" streams. When two first-order streams meet, they are said to form a second-order stream; when two second-order streams meet, they form a third-order stream, and so on. In the Horton system, the entire main stem of a drainage basin was assigned the highest number in that basin. However, in the Strahler system, adopted in 1957, only that part of the main stem below the tributary of the next highest rank gets the highest number.[2]

In the United States, the Mississippi River main stem achieves a Strahler number of 10, the highest in the nation. Eight rivers, including the Columbia River, reach 9. Streams with no tributaries, assigned the Strahler number 1, are most common. More than 1.5 million of these small streams, with average drainage basins of only 1 square mile (2.6 km2), have been identified in the United States alone.[2]