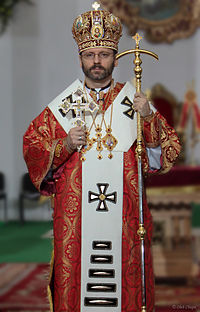 In the Eastern Catholic Churches, major archbishop is a title for an hierarch to whose archiepiscopal see is granted the same jurisdiction in his autonomous (sui juris) particular Church that an Eastern patriarch has in his, but is at the same time below the rank of Patriarch in the ranking.[1]

In addition to their role governing their particular Church, under canon law all major archbishops are members of the Congregation for the Oriental Churches in the Roman Curia.[5] They are required to attend the annual general meeting of this congregation, and to attend other sessions if they are visiting Rome or are otherwise able.[6]

The title major archbishop in the Catholic Church is roughly equivalent to the patriarchal title catholicos in some Orthodox Churches. Catholicos is used internally by the Syro-Malankara Church for their major archbishop.[7]

Suggestions have been made at various times to elevate major archbishops to patriarchs, most notably the major archbishops of the Ukrainians and Syro-Malabars. Popes from Paul VI to Benedict XVI have rejected this suggestion, at least in part, on ecumenical grounds: it is the hope among Christians that these Catholic jurisdictions will one day be reunited with their Orthodox counterparts in a reunification of the Church; hence, establishing a "patriarchate" in Ukraine would be interpreted as an insult to the Russian Orthodox Patriarch of Moscow (as it would seem to deny his legitimate holding of that title). The same applies in India, where such a move would insult the Syriac Orthodox Patriarch of Antioch, who traditionally enjoys the spiritual authority over the Syriac Christians in India.

There was a strong movement within and after the Second Vatican Council to elevate Josyf Slipyj, then metropolitan of Lviv, for the Ukrainians, to the status of patriarch. Many of his admirers use this title for Slipyj when referring to him historically and many in Ukraine use this title for the current major archbishop even today. However, Pope Paul VI specifically declined to grant this title and instead appointed Slipyj the first "major archbishop" of Lviv, thereby effectively creating this new title (the seat has since been moved to Kiev), and Slipyj's successors have only used the title of major archbishop.