From Infogalactic: the planetary knowledge core
Jump to: navigation, search
For other uses, see Malatya (disambiguation). 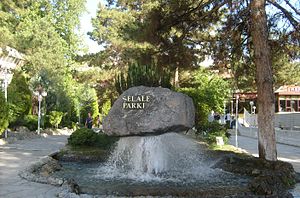 The city has been a human settlement for thousands of years. The Assyrians called the city Meliddu.[4] Strabo says that the city was known "to the ancients"[5] as Melitene (Ancient Greek Μελιτηνή), a name adopted by the Romans following Roman expansion into the east. According to Strabo, the inhabitants of Melitene shared with the nearby Cappadocians and Cataonians the same language and culture.

The site of ancient Melitene lies a few kilometres from the modern city in what is now the village of Arslantepe and near the dependant district center of Battalgazi (Byzantine to Ottoman Empire). Present-day Battalgazi was the location of the city of Malatya until the 19th century, when a gradual move of the city to the present third location began. Battalgazi's official name was Eskimalatya (Old Malatya); until recently, it was a name used locally.

Arslantepe has been inhabited since the development of agriculture in the Fertile Crescent, nearly 6,000 years ago. From the Bronze Age, the site became an administrative center of a larger region in the kingdom of Isuwa. The city was heavily fortified, probably due to the Hittite menace from the west. The Hittites conquered the city in the fourteenth century B.C. In Hittite, melid or milit means "honey" (in Ancient greek meli, μέλι), offering a possible etymology for the name, which was mentioned in the contemporary sources of the time under several variations (e.g., Hittite: Malidiya[6] and possibly also Midduwa;[7] Akkadian: Meliddu;[4] Urar̩rtian: Melitea).

After the end of the Hittite empire, the city became the center of the Neo-Hittite state of Kammanu. The city continued old Hittite traditions and styles. Researchers have discovered a palace inside the city walls with statues and reliefs that are examples of the artistic works of that age. The people erected a palace, accompanied by monumental stone sculptures of lions and the ruler.

The Assyrian king Tiglath-Pileser I (1115–1077 B.C.) forced the kingdom of Malidiya to pay tribute to Assyria. Malidiya continued to prosper until the Assyrian king Sargon II (722-705) sacked the city in 712 BC. At the same time, the Cimmerians and Scythians invaded Asia Minor and the city declined. Some occupation continued on the site into the Hellenistic and Roman periods — a smithy with four ovens has been excavated from the Roman period. There was a long gap in occupation between the mid-7th century and renewed use of the site in the late 12th or early 13th century.[8]

Archeologists first began to excavate the site of Arslantepe in the 1930s, led by French archaeologist Louis Delaporte. Since 1961, an Italian team of archaeologists, today led by Marcella Frangipane, has been working at the site.

Melitene during the Roman Empire

The Kingdom of Cappadocia, ruled by the House of Ariobarzanes (95-36 BC)[9] became a Roman client in 63 BC.[10] After the Kingdom's annexation by the Roman Empire in 17 AD, the settlement was re-established as Melitene in 72 AD on a different site, as the base camp of Legio XII Fulminata[11] (which continued to be based there until at least the early 5th century according to Notitia Dignitatum). The legionary base of Melitene controlled access to southern Armenia and the upper Tigris. It was the end point of the important highway running east from Caesarea. The camp attracted a civilian population and was probably granted city status by Trajan in the early 2nd century AD.[11] It is known for being a prolific source of imperial coins minted from the 3rd to the early 5th centuries.

Procopius wrote admiringly of the temples, agoras and theatres of Melitene but no evidence of them now remain. It was a major center in the province of Armenia Minor (Armenian: Փոքր Հայք Pokr Hayk,[12]) created by Diocletian from territory separated from the province of Cappadocia. In 392 A.D., Emperor Theodosius I divided Armenia Minor into two new provinces: First Armenia, with its capital at Sebasteia (modern Sivas); and Second Armenia, with its capital at Melitene.[13]

During the reign of the Emperor Justinian I (527-565), administrative reforms were carried out in this region: The province of Second Armenia was renamed Third Armenia (Armenia Tertia), with its territory unchanged and its capital still at Melitene.[14][15] Melitene's city walls were constructed in the 6th century by the emperors Anastasius and Justinian. Those that still stand mostly date from the Arab period, perhaps of the 8th century, though retaining the layout of and some remnants from earlier building phases.[16] The city was captured by the Rashidun Caliphate in 638. It then became a base for their raids deeper into the Byzantine Empire, a policy continued by the Abbasids. In the 9th century, under its semi-independent emir Umar al-Aqta, Malatya rose to become a major opponent of the Byzantine Empire until Umar was defeated and killed at the Battle of Lalakaon in 863. The Byzantines attacked the city many times, but did not finally take it until the campaigns of John Kourkouas in 927-934. After successively accepting and renouncing vassal status, the city was finally taken in May 934, its Muslim inhabitants driven out or forced to convert, and replaced by Greek and Armenian settlers.[17]

Capture of Melitene by the Byzantines in 934

The West Syrian diocese of Melitene has been established since the sixth century and was as well surrounded by other bishoprics belonging to nearby towns.[18] In the tenth century the Emperor Nikephoros II Phokas convinced the Jacobite Patriarch of Antioch to move the head of the patriarchate into the region of Melitene.[19] The city was attacked and devastated by the Seljuks in 1058.[20]

In the period that followed the Turkish advance into the Byzantine Empire after the defeat at the Battle of Manzikert, Gabriel of Melitene, a Greek Orthodox Armenian who had risen from the ranks of the Byzantine army, governed the city. From 1086 to 1100 he preserved his independence with the aid of the Beylik of the Danishmends. After 1100, he invested heavily on the commanders of the First Crusade, especially Bohemond I of Antioch and Baldwin of Boulogne.[21]

The Danishmends took over Malatya one year later in 1101 (see Battle of Melitene). With the Anatolian Seljuk Sultanate based in Konya taking over the Beylik of Danishmend in the late 12th century, Malatya became part of their realm. It was part of the Mamluk Sultanate in the end of the 13th century. The city came under Ottoman rule in 1515 and remained so until the establishment of the Republic of Turkey.

The current city of Malatya was founded in 1838, with the old site of Mitilene now designated as Old Malatya.[22]

Malatya was the scene of anti-Armenian violence during the late nineteenth and early twentieth centuries. During the Hamidian Massacres of 1895-1896, 7,500 Armenian civilians were massacred by Islamic mobs. Armenian villages in the rural countryside of Malatya were destroyed.[23] In the aftermath, a Red Cross team sent to Malatya and led by Julian B. Hubbell concluded that 1,500 Armenian houses had been pillaged and 375 burned to the ground.[24]

According to the 1913 Catholic Encyclopedia, Malatya city was inhabited by 30,000 people with a clear ethnic Turkish majority, and an Armenian population of 3,000, of whom 800 were Catholics.[25] A more recent source, however, states that Malatya's population hovered around 40,000, of which half (20,000) were Armenian.[26] Of the five churches in the city, three belonged to the Armenians. They were chiefly involved in commerce, silkworm cultivation, silk trade and agriculture. In the spring of 1915, the Armenians of the town were rounded up by Ottoman authorities and deported on death marches as part of the Armenian Genocide. Those who survived settled in Armenia, where they settled in Yerevan in a new district called Malatya-Sebastia, the Middle East, and North America.[26]

Malatya is on the borderline of a hot dry-summer continental climate (Köppen climate classification Dsa) and cold semi-arid climate (Köppen climate classification BSk) with hot and dry summers and cold and snowy winters. The highest recorded temperature was 42.2 °C (108.0 °F) on 31 July 2000. The lowest recorded temperature was -19 °C (-2.2 °F) on 27 December 2002.

Historically, Malatya produced opium. The British, in 1920, described the opium from Malatya as having "the highest percentage of morphia".[29] 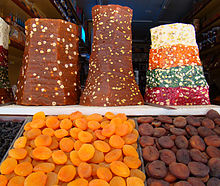 Köfte (meatballs) have a special place in the local cuisine as do apricots, which are used in many meals from kebabs (meat broiled or roasted in small pieces) to desserts. There are over 70 kinds of köfte, usually made with wheat and other ingredients. Kağıt kebabı is one of the most important local specialties - a dish made of lamb and vegetables broiled in a wrapper, usually oily paper. Other important dishes are a variety of stuffed specialties, including stuffed mulberry leaves, cabbage, chard, lettuce wraps with olive oil, vine leaves, cherry leaves, bean leaves, grape leaves, beets, onions, and zucchini flowers.

The Malatya region is best known for its apricot orchards. About 50% of the fresh apricot production and 95% of the dried apricot production in Turkey, the world's leading apricot producer, is provided by Malatya[30] and the name of the fruit is synonymous with the city. It reached its most delicious and sophisticated form in the fertile soil of Malatya, nourished from the alluvial soil of the Euphrates. Overall, about 10-15% of the worldwide crop of fresh apricots, and about 65-80% of the worldwide production of dried apricots comes out of Malatya. Malatya apricots are often sun-dried by family-run orchards using traditional methods, before they are collected and shipped throughout the world.

Malatya Fair and Apricot Festivities has been held since 1978, every year in July, to promote Malatya and apricots and to convene the producers to meet one another. During the festivities, sports activities, concerts and apricot contests are organized. 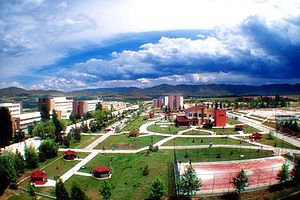 İnönü University, one of the largest universities in eastern Turkey, is in Malatya. It was established in 1975 and has three institutions and nine faculties, with more than 2,500 faculty and 20,000 students. Its large campus is in the southern part of Malatya.

By its relative advance in industrial growth, Malatya is a pole of attraction for its surrounding regions, in commercial and inward immigration. The city is at a key junction in Turkey's road and rail network. By rail, it serves as the junction for Aleppo through Syria–Samsun line. The bus terminal is 5 km west of the city center; there are regular intercity services to and from Ankara, Istanbul and Gaziantep. The railway station is 3 km west of the city center, and daily express trains run to Elazığ, Diyarbakır, Istanbul and Ankara. These stations are easily reached by taxis and dolmuş services. A trolleybus line is under construction, with opening predicted for 2014.[31]

Malatya's airport, Erhaç Airport, is 26 km west of the city center. There are daily domestic flights from Istanbul, Ankara and Izmir. Since 2007 there have been international flights during the summer months. These flights are especially from German cities to Malatya, and most of the passengers are Turkish citizens who are living and working in Germany.