From Infogalactic: the planetary knowledge core
Jump to: navigation, search
This article is about a tiger subspecies. For Japanese Imperial Army general who has the nickname "Malayan Tiger" or "Tiger of Malaya", see Tomoyuki Yamashita.

The Malayan tiger (Panthera tigris jacksoni) is a tiger subspecies that inhabits the southern and central parts of the Malay Peninsula and has been classified as Critically Endangered by IUCN in 2015 as the population was roughly estimated at 250 to 340 adult individuals in 2013; this population likely comprises less than 250 mature breeding individuals, with a declining trend.[1]

In Malay language the tiger is called harimau, also abbreviated to rimau.[4] 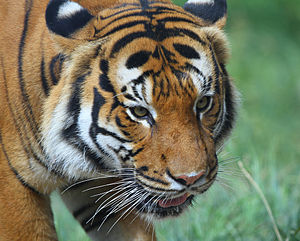 There is no clear difference between the Malayan and the Indochinese tiger when specimens from the two regions are compared cranially or in pelage. No type specimen was designated.[5]

The geographic division between Malayan and Indochinese tigers is unclear as tiger populations in northern Malaysia are contiguous with those in southern Thailand.[1] In Singapore tigers were extirpated in the 1950s, and the last one shot in 1932.[2]

Between 1991 and 2003, tiger signs were reported from early-succession vegetation fields, agricultural areas outside forests in Kelantan, Terengganu, Pahang, and Johor, and many riparian habitats outside forests in Pahang, Perak, Kelantan, Terengganu, and Johor. Most of the major rivers that drain into the South China Sea had some evidence of tigers, whereas those draining into the Straits of Malacca in the west did not. Tiger sign was not reported from Perlis, Penang, and Malacca, and the federal territories of Kuala Lumpur and Putrajaya in the west coast. The total potential tiger habitat was 66,211 km2 (25,564 sq mi), which comprised 37,674 km2 (14,546 sq mi) of confirmed tiger habitat, 11,655 km2 (4,500 sq mi) of expected tiger habitat and 16,882 km2 (6,518 sq mi) of possible tiger habitat. All the protected areas greater than 402 km2 (155 sq mi) in size had tigers.[7]

In September 2014 two conservation organisations announced that a camera trap survey of seven sites in the three separate habitats from 2010 to 2013 had produced an estimate of the surviving population from 250 to 340 healthy individuals, with a few additional isolated small pockets probable. According to the report, the decline meant that the species might have to be moved to the "Critically Endangered" category in the IUCN list.[8]

Malayan tigers prey on sambar deer, barking deer, wild boar, Bornean bearded pigs and serow. Tigers also prey on sun bear, young elephants and rhino calves. Whether their principal prey includes adult gaur and tapir is unknown. Occasionally, livestock is also taken; however, tiger predation reduces the numbers of wild boar which can become a serious pest in plantations and other croplands. Studies indicate that in areas where large predators (tigers and leopards) are extinct, wild pigs are over 10 times more numerous than in areas where tigers and leopards are still present.[9][10][11]

Habitat fragmentation due to development projects and agriculture are serious threats.[7] Commercial poaching occurs at varying levels in all tiger range states. In Malaysia there is a substantial domestic market in recent years for tiger meat and manufactured tiger bone medicines.[12] 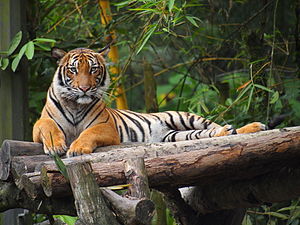 Tigers are included on CITES Appendix I, banning international trade. All tiger range states and countries with consumer markets have banned domestic trade as well.[12]

The captive population of the Malayan tiger should be managed in a similar way to the other recognised subspecies but it is unclear how this information will be used by the zoo community.[citation needed] The Cincinnati Zoo was the first zoo in North America to begin a captive breeding program for Malayan tigers with the importation of a male and three females from Asia between 1990 and 1992. However the breeding program was not designated as a Tiger SSP until 1998. As of 2011 there were 54 of this subspecies in North American zoos. The 54 individuals are located in 25 institutions and are descended from only 11 founders. Therefore, the plan of retaining a target of 90% genetic diversity over the next century is not possible unless other founders are added.

When the tiger population of the Malay Peninsular was accepted as a distinct subspecies in 2004, the chairman of the Malaysian Association of Zoos, Parks and Aquaria argued that the new subspecies should be named Panthera tigris malayensis to reflect the geographical region of its range.[13] As a compromise, it received the vernacular name "Malayan tiger" and the scientific name Panthera tigris jacksoni, which honours the tiger conservationist Peter Jackson.[14][15]

The Malayan tiger is the national animal of Malaysia.[16]

Two tigers are depicted as supporters in the coat of arms of Malaysia, and the tiger appears in various heraldry of Malaysian institutions such as Royal Malaysian Police, Maybank, Proton and Football Association of Malaysia. It symbolises bravery and strength to Malaysians. It is also the nickname for the Malaysian national football team. The tiger has been given various nicknames by Malaysians, notably "Pak Belang," which literally means "Uncle Stripes." Pak Belang features prominently in folklore as one of the adversaries of Sang Kancil (the mouse deer).

The Malayan tiger was featured on Special Service Group insignia.