As of 2014[update] General Zulkefli Zin serves as the Chief of Defence Forces.

Malaysia's armed forces originated from the formation of local military forces in the first half of the 20th century, during British colonial rule of Malaya and Singapore prior to Malaya's independence in 1957. Its role is to defend the sovereignty and strategic interests of Malaysia from all forms of threat.[citation needed]

It is responsible for assisting civilian authorities to overcome all international threats, preserve public order, assist in natural disasters and participate in national development programs. It is also sustaining and upgrading its capabilities in the international sphere to uphold the national foreign policy of being involved under the guidance of the United Nations (UN).

The main theatres of operations were within Malaysian borders, primarily to fight an insurgency led by the Communist Party of Malaya (CPM) in what was known as the Emergency. The only foreign incursion of Malaysian territory in modern times were in World War II by Japan (Malaya was then not a unified political entity and consisted of the British Crown Colony of the Straits Settlements, and the British protected Federated Malay States and Unfederated Malay States) and during the Indonesia-Malaysia confrontation by Indonesia under the leadership of President Sukarno. Operations on foreign soil have mainly been peacekeeping operations under the auspices of the United Nations.

(The rest of the entries below require a clean-up) 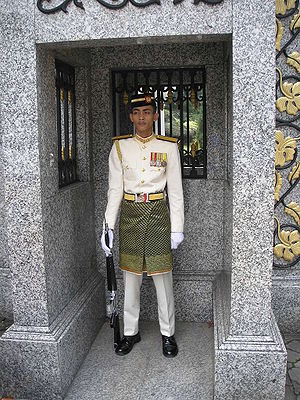 Royal guard of the Malaysian Army outside the main gate of the Istana Negara, Kuala Lumpur 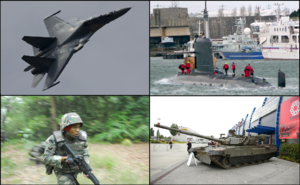 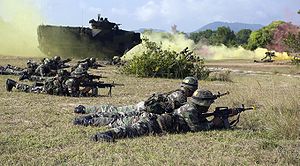 Soldiers from the Malaysian Army 9th Royal Malay Regiment with a M4 Carbine carry out a beach assault with US Marines during a combined amphibious landing exercise on the final day of CARAT Malaysia 2009. 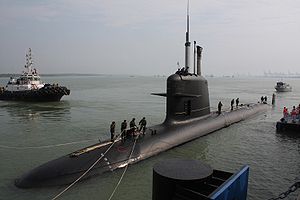 Malaysia's first Scorpène class submarine docked at the naval base in Port Klang on the outskirts of Kuala Lumpur on 3 September 2009. 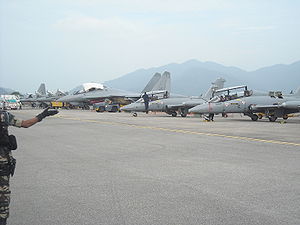 In the early 1990s, Malaysia undertook a major program to expand and modernise its armed forces. However, budgetary constraints imposed by the 1997 Asian financial crisis held many of the procurements. The recent economic recovery may lead to relaxation of budgetary constraints on the resumption of major weapons purchases. In October 2000 the Defence Minister also announced a review of national defence and security policy to bring it up to date. The review addressed new security threats that have emerged in the form of low intensity conflicts, such as the kidnapping of Malaysians and foreigners from resort islands located off the east coast of the state of Sabah and risk rising territory dispute with several neighbour countries. Currently, 1.4% of Malaysia's GDP is spent on the military, which employs 1.23% of Malaysia's manpower.[5] Dr Kogila Balakrishnan is the head of the Defence Industry.

Since the recovery from the 1997 economic crisis, the army's modernisation program gained momentum.

TUDM has traditionally looked to the West for its purchases, primarily to the United States. However, limitation imposed by the United States on "new technology" to the region such as the AIM-120 AMRAAM fire-and-forget air-to-air missiles has made TUDM consider purchases from Russia and other non-traditional sources.

In early 2004, the Ministry of Defence also initiated a compulsory National Service program for 18 years old Malaysians. Participants of the Malaysian National Service are chosen randomly. Currently, only 20% of those eligible are inducted but plans call for this program to eventually cover all 18-year-olds. Although under the purview of the Ministry of Defence, the National Service is not a military programme. Draftees are taught basic hand-to-hand combat and handling of certain weapons, including Colt M16s by military instructors, but are not expected to be conscripted or called into military draft. It is described as a nation and community building programme and incorporate other training modules including character learning and civics.

In light of the increasing crude oil price worldwide, the military had volunteered in a pioneering program to use biodiesel. By next year (2007), all diesel-type vehicle in the Malaysian Armed Forces will be using biodiesel consisting of 95% diesel and 5% oil palm diesel.

There is also a new development unveiled during the celebration of the Malaysia's 50th independence. It is a laser guide projectile code name Taming Sari XK98, but no further details were enclosed. It was first spotted by the public when it participated the celebration parade.

During the Defence Services Asia (DSA) 2006, Malaysia announced that the US made M4 carbine service rifle will replace the Austrian made Steyr AUG service rifle for all three Malaysian Armed Forces services. This decision has been finalised. Malaysia had also obtained a licensed product line of the rifle under SME Ordnance. The first batch of the weapon is expected to be delivered by year 2008.

On 18 July 2007, five days after the wreckage of a Nuri (Sikorsky Sea King S-61A4) helicopter was found near Genting Sempah, Pahang, Defence Minister Najib Razak announced that the Malaysian government will call soon for an international tender for new helicopters to replace the ageing fleet. In September 2008, Malaysia announced the selection of the Eurocopter EC725[6] for an initial order of 12 helicopters. However, the contract award has been indefinitely delayed due to budgetary constraints. Eurocopter signed a co-operation contract with the Malaysian Ministry of Defence at the 49th Paris air show in June 2011, related to the supply of the 12 EC 725 helicopters to Royal Malaysian Air Force (RMAF) for search and rescue (SAR) operations. These new aircraft will replace the existing fleet of Sikorsky S-61 Sea King rotorcraft. Deliveries will begin in 2012 and are expected to conclude in 2014.

Defence Minister Hishammuddin Tun Hussein said in a statement on 10 October 2013, Malaysia is planning on establishing a marines corps for amphibious operation.[7] The marine will be drawn from all three services and the bulk of it is from one of the three parachute battalions of the 10 Paratrooper Brigade which will be re-designated as a marine battalion. The 9th Royal Malay Regiment (para) and 8th Royal Ranger Regiment (para) have both conducted amphibious warfare training as a secondary mission and most recently in June 2013 during the CARAT exercise with the US Marine Corps (USMC) and subsequently in an amphibious landing exercise with French troops and the landing platform dock FNS Tonnerre.[citation needed] Malaysian government has yet to decide whether the marines will fall under Malaysian Army or Royal Malaysian Navy.[citation needed]

The Five Power Defence Arrangement between Malaysia, Singapore, Australia, New Zealand, and the United Kingdom, is a regional security initiative which has been in place for almost 40 years. It involves joint military exercises held between the 5 countries.[8]

Joint exercises and war games also been held with Brunei,[9] China,[10] Indonesia[11] and the United States.[12] Malaysia, Philippines, Thailand and Vietnam have agreed to host joint security force exercises to secure their maritime border and tackle issues such as illegal immigration, piracy and smuggling.[13][14][15]

There are fears that extremist militants activities in the Muslim areas of the southern Philippines[16] and southern Thailand[17] would spill over into Malaysia.