Malcolm Elliott (born 1 July 1961) is a former English professional cyclist, whose professional career has lasted from 1984 to 1997 when he retired and from 2003 up to 2011 when he made his comeback in British domestic racing.

Known as a sprinter, his career includes three stages and the points classification in the Vuelta a España, two gold medals in the Commonwealth Games, and winning the amateur Milk Race and its professional version, the Kellogg's Tour. He rode and finished the Tour de France in 1987 and 1988. Elliott also competed at the Olympic Games in 1980 and 1996.[1]

Elliott was brought up in the Wadsley area of Sheffield. His joined Rutland Cycling Club in Sheffield at 15 where he was selected for the British team for the world junior championship in Argentina in 1979. In 1980 riding for Rutland CC, Elliott won the British National Hill Climb Championships, beating Jeff Williams by one fifth of a second. He also raced for the UV Aube cycling club in Troyes, France, for part of 1980 season to gain experience of racing on the continent before being selected for the British team pursuit at the 1980 Summer Olympics in Moscow. He, Sean Yates and Tony Doyle finished seventh.[1]

Elliott's breakthrough came at the 1982 Commonwealth Games in Brisbane where he first took gold in the team time trial and then again in the 184 kilometre road race by outsprinting Steve Bauer, Roger Sumich, Steve Lawrence and Russell Harrington.

1983 was Elliott's final year as an amateur and he took six stages of the Milk Race and was also third overall in the Circuit des Ardennes before turning professional with Raleigh-Weinmann in 1984. Further domestic success followed in 1984 and 1985 before switching to the ANC–Halfords Cycling Team in 1986, alongside Graham Jones, Paul Watson and Joey McLoughlin.

ANC–Halfords raced on the continent as well as in Britain. Elliott finished third in the 1987 Amstel Gold Race. The team received an invitation to the 1987 Tour de France with Elliott finishing 94th overall and third on the stage into Bordeaux.

In 1988 Elliott joined the Fagor team, led by Stephen Roche. Elliott took his first stage in the Vuelta a España that year and another two in 1989, by which time he had switched to the Spanish Teka team riding alongside fellow British rider Darryl Webster. He rode in Europe until the end of 1992 when he signed for the American team, Chevrolet–LA Sheriffs.

Elliott had many wins for Chevrolet, winning the First Union Grand Prix in 1993 and 1994 and the Redlands Classic in 1993 and 1994, and two stage wins in the Tour DuPont in 1993 and 1995. In 1996 he was then selected for the Olympic Games road race, but finished a disappointing seventy ninth.[1] The race was won by Pascal Richard. In 1997 he moved to Comptel–Colorado Cyclist but the team hit financial trouble. That led Elliott to retire at the end of 1997 aged 36. 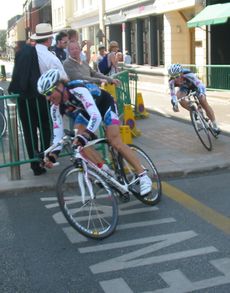 Elliott in the Jersey Town Criterium 2009 in Saint Helier

Elliott returned at the start of 2003 at 41. Riding as an individual for the Pinarello-Assos squad (set up by his former manager at ANC–Halfords, Phil Griffiths), he won in the Havant International GP and stages in the Irish Milk Ras. In 2004 he won the season long Premier Calendar, and the National Elite Circuit Series. For 2006 Elliott signed for Plowman Craven team and again won the National Elite Circuit Series. On 24 August 2006 in St. Johann, Austria, he became UCI road masters world champion.

In 2007 he won the UCI 1.2 ranked International CiCle Classic, and the Shay Elliott Memorial, the Irish one-day classic.

In 2009 he was inducted into the British Cycling Hall of Fame.[2]

For the 2010 season, Elliott raced with the newly launched Motorpoint Pro-Cycling Team. The ten-strong team, based in Stone in Staffordshire, saw Elliott managed by Keith Lambert and the team run by Phil Griffiths. The team competed in such high-profile races as the Tour of Britain and 'UK Tour Series' – the city centre-based cycling race series broadcast on TV, in which Elliott won the Durham round and the Motorpoint team took overall honours. On 16 May 2010 he set the record for completing the Etape du Dales sportive in 5 hours and 43 minutes.[3] He left the roster after the 2011 season, but remained with the team as a sporting director.[4][5]

In 1992 Elliott failed a dope test on stages 3 and 5 of the Tour of Andalucia, testing positive for nandrolone, an anabolic steroid. As the two tests were so close this was treated as a single infraction and he was stripped of the win on stage 3.[6]