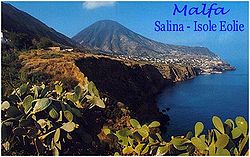 Malfa is a comune (municipality) on the island of Salina, one of the islands of Isole Eolie also known in the English language as Aeolian Islands, in the Province of Messina in the Italian region Sicily, located about 140 kilometres (87 mi) northeast of Palermo and about 80 kilometres (50 mi) northwest of Messina.[1]

Malfa derived its name from Amalfi (near Naples). In the 12th century some families established their lives in Malfa on the island of Salina.

The island of Salina is one of seven Eolian islands. Salina is the greenest of the seven. The main economic activities are agriculture, tourism and fishing. Cultivated products are grapes, capers, olives, figs and pricklypears.

Malfa is famous for producing and exporting the sweet white wine, Malvasia. The fertile soil produces tons of capers for export.

Malfa celebrates the festival of San Lorenzo (Patron Saint of Malfa) on 10 August each year, with a street parade, music and fireworks.

All demographics and other statistics: Italian statistical institute Istat. Many tourists from mainland Italy and foreign countries, especially Australia, visit Malfa during the summer months. There are various small hotels and B&Bs.

During the last century, many Malfitani migrated to Australia and to a lesser degree the United States. The Italian and Australian flags can be seen waving in the wind at the Malfa Municipal Office.

The other six Aeolian Islands are Lipari, Stromboli, Vulcano, Panarea, Filicudi and Alicudi. The islands were formed millions of years ago by a volcanic eruption. The last eruption took place in 10,000 BC from a crater near the village. 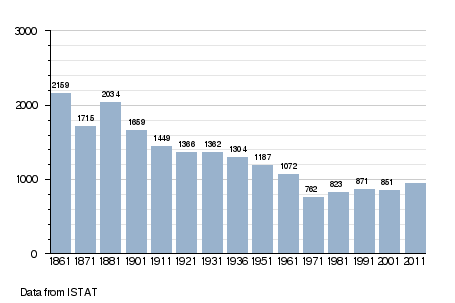