Malhar Rao Holkar (16 March 1693 – 20 May 1766) was a noble of the Maratha Empire, in present day India. Malhar Rao is particularly known for being the first Maratha Subhedar of Malwa in Central India. He was the first prince from the Holkar family which ruled the state of Indore. He was one of the early officers to help spread the Maratha rule to northern states and was given the state of Indore to rule by the Peshwa's.

Malhar Rao Holkar was from the Dhangar community, a pastoral group that is not technically a part of the Maratha caste.[2][3] He was born on 16 March 1693 in the village of Hol, near Jejuri, Pune District to Khanduji Holkar of Vir. Malhar Rao grew up in Taloda (Nandurbar District. Khandesh) at house of his maternal uncle, Bhojirajrao Bargal.[citation needed]

Holkar lived at a time when it was possible for ambitious people to improve their standing substantially. and in 1715 he was serving in forces under the control of Kadam Bande in Khandesh. Adopting the mercenary approach to service that was common at the time, Holkar was a part of the expedition to Delhi organised by Balaji Vishwanath in 1719, fought against the Nizam in the Battle of Balapur of 1720 and served with the Raja of Barwani.[4]

In 1721, having become disllusioned with Bande, Holkar became a soldier in the service of the Peshwa, Bajirao. became close to him and was soon able to move up the ranks. Participation in the Peshwa's campaign of 1723-24 was followed by a diplomatic role, settling a dispute with the state of Bhopal. Holkar was commanding a force of 500 men in 1725 and in 1727 he received a grant so that he could maintain troops in various areas of Malwa. Successful work during the Battle of Palkhed of 1728, during which he disrupted the supplies and communications of the Mughal armies, further increased his status. The Peshwa improved that as a counter to a perceived threat from less loyal supporters and by 1732, when the Peshwa gave him a large portion of western Malwa, Holkar had command of a cavalry force comprising several thousand men.[4]

War against the subjects of the Mughal Empire 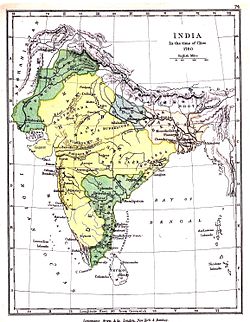 One of the foremost commanders of the Maratha Empire, he participated in the great victory near Delhi in 1736, and the defeat of the Nizam at Tal Bhopal in 1738. He also wrested Bassein from the Portuguese in 1739. He received Rampura, Bhanpura and Tonk in 1743, for the assistance given to Madhosingh I of Jaipur in his contest with Ishwari Singh. Granted an Imperial Sardeshmuckhi for Chandore, for his gallantry in the Rohilla campaign of 1748. From 1748 onwards, Malhar Rao Holkar’s position in Malwa became firm and secure. He became ‘Kingmaker’ in Northern and Central India and master of an extensive territory lying on both the sides of the Narmada as well as Sahyadri.[citation needed]

Malharrao Holkar, Jayappa Scindia, Gangadhar Tatya, Tukojirao Holkar, Khanderao Holkar went to help Safdarjung against Shadulla Khan, Ahmed Khan Bangash, Mohamud Khan, Bahadur Khan Rohilla as per the directions of Peshwa Balaji Bajirao. In the Battle of Fatthegad and Farukhabad, they defeated the Rohillas and Bangash (March 1751-April 1752). When Mughal Emperor came to know that Ahmed Shah Abdali had attacked Punjab in December 1751, he asked Safdarjung to make peace with Rohillas and Bangash. On 12 April 1752 Safdarjung agreed to help Marathas but the Emperor didn’t ratify the agreement and instead signed a treaty with Ahmed Shah Abdali on 23 April 1752. At the same time, the Peshwa asked Malharrao Holkar to return to Pune as Salabat Khan had attacked the city.

The Marathas attacked Kumher Fort on 20 January 1754 AD. They besieged the Kumher Fort till 18 May 1754. The war continued for about four months. During the war Khanderao Holkar, son of Malharrao Holkar, was one day inspecting his army in an open palanquin, when he was fired upon from the fort. The cannonball hit and killed him on 24 March 1754. Malhar Rao was infuriated by the death of his only son and wanted to take revenge. He vowed that he would cut off the head of Maharaja Suraj Mal and throw the soil of fort into Yamuna after destroying it. The Marathas increased pressure and Suraj Mal defended pacifly, but Suraj Mal was isolated as no other ruler was ready to help him. At this moment, Maharaja Suraj Mal was counseled by Maharani Kishori, who assured him not to worry and started diplomatic efforts.

Feroze Jung III, aided by the Marathas led by Malhar Rao Holkar, defeated Safdarjung. At this the Emperor collected a large army and camped at Sikandarabad[disambiguation needed]. On the other hand, the Maratha chieftain Sadashivrao Bhau, Malhar Rao Holkar and 2,000 Maratha's and their ally Feroze Jung III routed Imperial Mughal Army of the Mughal Emperor Ahmad Shah Bahadur at the First Battle of Sikandarabad (1754).[5] The Emperor left his mother, wives and a retinue of 8,000 women behind and fled to Delhi. 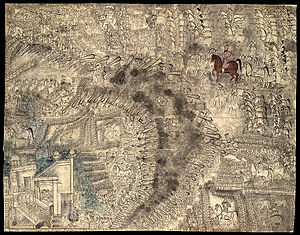 Ahmad Shah Durrani and his coalition decisively defeat the Maratha Confederacy, during the Third Battle of Panipat and restore the Mughal Empire to Shah Alam II.[7]

He died at Alampur, 2 May 1766, and was succeeded by his daughter-in-law Ahilya Bai Holkar. He is considered as one of the architects of Maratha control over India.[citation needed]