From Infogalactic: the planetary knowledge core
Jump to: navigation, search
For other uses, see Maliki (disambiguation).

Sharia based on Maliki school (in teal) is the predominant Sunni school in North Africa, West Africa and parts of central eastern Arabian peninsula.[1]

The Mālikī (Arabic: مالكي‎‎) madhhab is one of the four major schools of Fiqh or religious law within Sunni Islam.[2] It was founded by Malik ibn Anas in the 8th century. The Maliki school of jurisprudence relies on the Quran and hadiths as primary sources. Unlike other Islamic fiqhs, Maliki fiqh also considers the consensus of the people of Medina to be a valid source of Islamic law.[3]

The Maliki madhhab is one of the largest group of Sunni Muslims, comparable to the Shafi'i madhhab in adherents, but smaller than the Hanafi madhhab.[1][4] Sharia based on Maliki doctrine is predominantly found in North Africa (excluding northern and eastern Egypt), West Africa, Chad, Sudan, Kuwait, Bahrain,[5] the Emirate of Dubai (UAE), and in northeastern parts of Saudi Arabia.[1]

In the medieval era, the Maliki school was also found in parts of Europe under Islamic rule, particularly Islamic Spain and the Emirate of Sicily.[6] A major historical center of Maliki teaching, from the 9th to 11th centuries, was in the Mosque of Uqba of Tunisia.[7][8]

Although Ibn Anas himself was a native of Medina, his school faced fierce competition for followers in the Muslim east, with the Shafi'i, Hanbali and Zahiri schools all enjoying more success than Malik's school.[9] It was eventually the Hanafi school, however, that earned official government favor from the Abbasids.

The Malikis enjoyed considerably more success in the Africa, and for a while in Spain and Sicily. Under the Umayyads and their remnants, the Maliki school was promoted as the official state code of law, and Maliki judges had free rein over religious practices; in return, the Malikis were expected to support and legitimize the government's right to power.[10] This dominance in Spanish Andalus from the Umayyads up to the Almoravids continued, with Islamic law in the region dominated by the opinions of Malik and his students. The Sunnah and Hadith, or prophetic tradition in Islam, played lesser roles as Maliki jurists viewed both with suspicion, and few were well versed in either.[11] The Almoravids eventually gave way to the predominantly-Zahiri Almohads, at which point Malikis were tolerated at times but lost official favor. With the Reconquista, the Iberian Peninsula was lost to the Muslims in totality.[citation needed]

Although Al-Andalus was eventually lost, the Maliki has been able to retain its dominance throughout North and West Africa to this day. Additionally, the school has traditionally been the preferred school in the small Arab States of the Persian Gulf (Bahrain, Kuwait and Dubai). While the majority of Saudi Arabia follows Hanbali laws, the country's Eastern Province has been known as a Maliki stronghold for centuries.[1]

Maliki school's sources for Sharia are hierarchically prioritized as follows: Quran and then trustworthy Hadiths (sayings, customs and actions of Muhammad); if these sources were ambiguous on an issue, then `Amal (customs and practices of the people of Medina), followed by consensus of the Sahabah (the companions of Muhammad), then individual's opinion from the Sahabah, Qiyas (analogy), Istislah (interest and welfare of Islam and Muslims), and finally Urf (custom of people throughout the Muslim world if it did not contradict the hierarchically higher sources of Sharia).[2]

The Mālikī school primarily derives from the work of Malik ibn Anas, particularly the Muwatta Imam Malik, also known as Al-Muwatta. The Muwaṭṭa relies on Sahih Hadiths, includes Malik ibn Anas' commentary, but it is so complete that it is considered in Maliki school to be a sound hadith in itself.[3] Mālik included the practices of the people of Medina and where the practices are in compliance with or in variance with the hadiths reported. This is because Mālik regarded the practices of Medina (the first three generations) to be a superior proof of the "living" sunnah than isolated, although sound, hadiths. Mālik was particularly scrupulous about authenticating his sources when he did appeal to them, however, and his comparatively small collection of aḥādith, known as al-Muwaṭṭah (or, The Straight Path).[3] 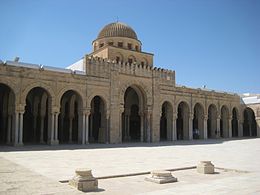 The second source, the Mudawwanah, is the collaborator work of Mālik's longtime student, Ibn Qāsim and his mujtahid student, Sahnun. The Mudawwanah consists of the notes of Ibn Qāsim from his sessions of learning with Mālik and answers to legal questions raised by Saḥnūn in which Ibn Qāsim quotes from Mālik, and where no notes existed, his own legal reasoning based upon the principles he learned from Mālik. These two books, i.e. the Muwaṭṭah and Mudawwanah, along with other primary books taken from other prominent students of Mālik, would find their way into the Mukhtaṣar Khalīl, which would form the basis for the later Mālikī madhhab.

Maliki school is most closely related to the Hanafi school, and the difference between them is more of a degree, rather than nature.[13] However, unlike Hanafi school, Maliki school does not assign as much weight to analogy, but derives it rulings from pragmatism using the principles of istislah (public interest) wherever the Quran and Shahih Hadiths do not provide explicit guidance.[13]

Notable differences from other schools

The Maliki school differs from the other Sunni schools of law most notably in the sources it uses for derivation of rulings. Like all Sunni schools of Sharia, the Maliki school uses the Qur'an as primary source, followed by the sayings, customs/traditions and practices of Muhammad, transmitted as hadiths. In the Mālikī school, said tradition includes not only what was recorded in hadiths, but also the legal rulings of the four rightly guided caliphs - especially Umar.

Malik bin Anas himself also accepted binding consensus and analogical reasoning along with the majority of Sunni jurists, though with conditions. Consensus was only accepted as a valid source of law if it was drawn from the first generation of Muslims in general, or the first, second or third generations from Medina, while analogy was only accepted as valid as a last resort when an answer was not found in other sources.[14][15] Malik was reported to have only actually used analogy himself one time, which he regretted on his deathbed.[citation needed]

The Maliki school considers apostasy, that is the act of leaving Islam or converting to another religion or becoming an atheist, as one of six major religious crimes.[16][17][18] Leaving Islam is a Hudud (or Hadd) crime in Maliki jurisprudence, that is one of six "crimes against God" a Muslim can commit, which deserves the fixed punishment of death as that is a "claim of God".[16][19][not specific enough to verify] The Maliki school permits up to ten days for recantation, after which the apostate must be killed. Both men and women apostates deserve death according to the traditional view of the Maliki.[18]

The Maliki school, as with other Muslim fiqhs, considers apostasy as a civil liability as well.[19][20] Therefore, (a) the property of the apostate is seized and distributed to his or her Muslim relatives; (b) his or her marriage annulled (faskh); (c) any children removed and considered wards of the Islamic state.[19] In case the entire family has left Islam, or there are no surviving Muslim relatives recognized by Sharia, the apostate's property is liquidated by the Islamic state (part of fay, الْفيء).[21][22] The Maliki school does not consider any wait as mandatory before children and property are seized.[23]

Maliki law views blasphemy as an offense distinct from, and more severe than apostasy. Death is mandatory in cases of blasphemy by Muslim men, and repentance is not accepted. For women, death is not the required punishment, but she is arrested and punished till she repents and returns to Islam or dies in custody.[24][25] A non-Muslim who commits blasphemy against Islam must be punished; however, he or she can escape punishment by converting and becoming a devout Muslim.[26]

Maliki school of jurisprudence (fiqh) holds that stoning is the required punishment for illegal sex by a married person, as well as for any form of homosexual relations.[27] In Al-Muwatta, the 8th century Sunni Islamic scholar Malik ibn Anas states that contested pregnancy in a free Muslim woman is proof of adultery and she must be stoned to death.[28][29]

Malik related to me from Ibn Shihab from Ubaydullah ibn Abdullah ibn Utba ibn Masud that Abdullah ibn Abbas said, "I heard Umar ibn al-Khattab say, 'Stoning is in the Book of Allah for those who commit adultery, men or women when they are muhsan and when there is clear proof of pregnancy or a confession.'"

Malik ibn Anas in 8th century, as well as later Maliki jurists dedicate a significant portion of their discussion on slave law in their interpretation of Sharia.[31] They use the terms abd, amah, fata, gulam, jariyah, raqiq, khadim, mamluk and others to refer to different types of slaves. Most discuss ownership rights over slaves captured in war or purchased in slave markets, the duties of the slaves, punishment of slaves who steal or have illegal sex or commit other crimes, rights of men to force sex on a slave with or without consent, requirements of master's permission and the process by which a slave can legally marry, inheritance of slavery by a slave's children, how masters can will, gift or sell their slaves.[31][32] Some sections of the Maliki school's literature on law discuss the process of emancipation of slaves who convert to Islam, as well as the property rights of such emancipated slaves. Malik ibn Anas' foundational book for the Maliki school dedicates three chapters to slavery: ataqah wa-wala, mukatab and mudabbar.[31][33][34]

Also See: Salat There are slight differences in the preferred methods of ṣalāt, or prayer, in the Māliki school.[35]