From Infogalactic: the planetary knowledge core
Jump to: navigation, search
This article is about a type of warship. For other uses, see Man of war (disambiguation). For the literal spelling with o', see Man O' War (disambiguation).
Not to be confused with Man-at-arms. 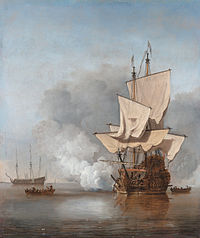 The man-of-war (pl. men-of-war; also man of war, man-o'-war, man o' war, or simply man)[1][2] was a British Royal Navy expression for a powerful warship or frigate from the 16th to the 19th century. The term often refers to a ship armed with cannon and propelled primarily by sails, as opposed to a galley which is propelled primarily by oars. The man-of-war was developed in England in the early 16th century from earlier roundships with the addition of a second mast to form the carrack. The 16th century saw the carrack evolve into the galleon and then the ship of the line. The evolution of the term has been given thus:

Man-of-war. "A phrase applied to a line of battle ship, contrary to the usual rule in the English language by which all ships are feminine. It probably arose in the following manner: 'Men of war' were heavily armed soldiers. A ship full of them would be called a 'man-of-war ship.' In process of time the word 'ship' was discarded as unnecessary and there remained the phrase 'a man-of-war.'"

The man-of-war design developed by Sir John Hawkins, had three masts, each with three to four sails. The ship could be up to 60 metres long and could have up to 124 guns: four at the bow, eight at the stern, and 56 in each broadside. All these cannons required three gun decks to hold them, one more than any earlier ship. It had a maximum sailing speed of eight or nine knots.