From Infogalactic: the planetary knowledge core
Jump to: navigation, search
For other uses, see Manche (disambiguation).

Manche (French pronunciation: ​[mɑ̃ʃ]) is a French department in Normandy (Normandie), named for the English Channel, which is known as La Manche, literally "the sleeve", in French, that borders its north and west shores and part of its east shore.

Manche is one of the original 83 departments created during the French Revolution on March 4, 1790. It was created from part of the province of Normandie.

The first capital was Coutances until 1796, and it resumed that role after World War II because of the almost complete destruction of Saint-Lô during the battle of Normandy following D-Day. When Saint-Lô was rebuilt, it again became the capital. 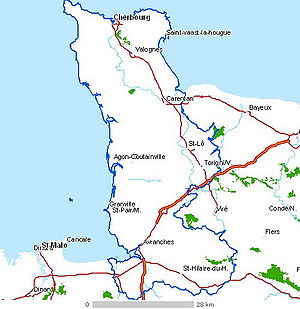 The Department includes the Cotentin Peninsula down to the famous Mont St Michel; though of the off-shore Channel Islands only Chausey forms part of the territory of the department.

The region is lush and green with sandy beaches, remaining very rural and farming oriented. The peninsula was originally joined as a single land mass to Cornwall and Dorset in England, meaning that their countrysides are very similar. Flat marsh areas are known for their bird watching. The region and around St Lo is the horse capital of France, where the cooler climate compared to the south is ideal for breeding and training.

France's first EPR reactor is near completion at Cherbourg and the TGV fast trains are planned for Paris to Caen and Cherbourg for 2020.

The climate is oceanic, with relatively mild winters temperatures can go below zero for a few days occasionally. Temperate summers, around 20 °C, can occasionally reach 35 °C in direct sun light. Precipitation is substantial, and varies greatly by region, between 700mm on the coast and 1300mm in the southern central area. Highly localised, not life-threatening flash flooding has been experienced over the last few years in the spring period.

The west coast benefits from the Gulf stream's influence, allowing the naturalization of many Mediterranean and exotic plants (mimosas, palms, agaves...).

There is often a sea breeze on the coast, which combined with tides contributes to quick temperature changes over a single day. Sea temperatures can be very pleasant for swimming between July and October.

Inhabitants of the department are called Manchots or Manchois.