The maned wolf (Chrysocyon brachyurus) is the largest canid of South America. Its markings resemble those of foxes, but it is not a fox, nor is it a wolf, as it is not closely related to other canids. It is the only species in the genus Chrysocyon (meaning "golden dog").

This mammal is found in open and semi-open habitats, especially grasslands with scattered bushes and trees, in south, central-west, and southeastern Brazil (Mato Grosso, Mato Grosso do Sul, Minas Gerais, Goiás, São Paulo, Federal District, and recently, Rio Grande do Sul), Paraguay, northern Argentina, Bolivia east and north of the Andes,[4] and far southeastern Peru (Pampas del Heath only).[5] It is very rare in Uruguay, possibly being displaced completely through loss of habitat.[2] IUCN lists it as near threatened,[2] while it is considered a vulnerable species by the Brazilian government (IBAMA).

It is known locally as aguará guazú (meaning "large fox" in the Guarani language), or "kalak" by the Toba, lobo de crin, lobo de los esteros, or lobo colorado, and as lobo-guará in Brazil. It also is called borochi in Bolivia.

Video of captive maned wolves at Ueno Zoo, in Japan
File:Manedwolfskull.jpg
Drawing of the skull of a maned wolf

The maned wolf is the tallest of the wild canids; its long legs are likely an adaptation to the tall grasslands of its native habitat.[8] Fur of the maned wolf may be reddish brown to golden orange on the sides with long, black legs, and a distinctive black mane. The coat is marked further with a whitish tuft at the tip of the tail and a white "bib" beneath the throat. The mane is erectile, and typically, is used to enlarge the wolf's profile when threatened or when displaying aggression. Rare melanistic maned wolves exist, and the first black adult maned wolf was photographed by camera trap in northern Minas Gerais in Brazil in 2013.[9][10]

The maned wolf also is known for the distinctive odor of its territory markings, which has earned it the nickname "skunk wolf."

Unlike other large canids (such as the gray wolf, the African hunting dog, or the dhole) the maned wolf does not form packs.[6] It hunts alone, usually between sundown and midnight. Maned wolves rotate their large ears to listen for prey animals in the grass. They tap the ground with a front foot to flush out the prey and pounce to catch it.[7] It kills its prey by biting on the neck or back, and shaking the prey violently if necessary.[11] Monogamous pairs may defend a shared territory of approximately 30 km2 (12 sq mi), although outside of mating, the individuals may meet seldom. The territory is crisscrossed by paths that the maned wolves create as they patrol at night. Several adults may congregate in the presence of a plentiful food source, for example, a fire-cleared patch of grassland that would leave small vertebrate prey exposed while foraging. 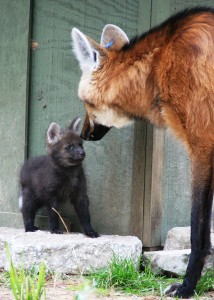 A maned wolf and pup at White Oak Conservation

Both female and male maned wolves use their urine to communicate, e.g. to mark their hunting paths or the places where they have buried hunted prey.[11] The urine has a very distinctive odor, which some people liken to hops or cannabis. The responsible substance very likely is a pyrazine, which also occurs in both plants.[12] (At the Rotterdam Zoo, this smell once set the police on a hunt for cannabis smokers.[12][13]) The preferred habitat of the maned wolf include grasslands, scrub prairies, and forests. 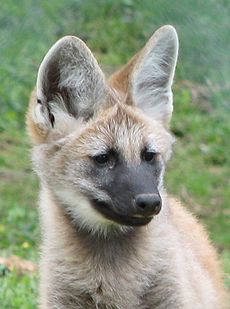 Their mating season ranges from November to April. Gestation lasts 60 to 65 days and a litter may have from two to six black-furred pups, each weighing approximately 450 g (16 oz). Pups are fully grown when one year old. During that first year, the pups are known to rely on their parents for food.[11]

The maned wolf is omnivorous. It specialises in preying on small and medium-sized animals, including small mammals (typically rodents and rabbits), birds, and even fish,[14][11] but a large portion of its diet (more than 50%, according to some studies) is vegetable matter, including sugarcane, tubers, and fruit (especially the wolf apple, Solanum lycocarpum, a tomato-like fruit).[15] Traditionally, captive maned wolves were fed meat-heavy diets, but that caused them to develop bladder stones. Zoo diets for them now feature fruits and vegetables, as well as meat and dog chow.

Relations with other species

The maned wolf participates in symbiotic relationships. It contributes to the propagation and dissemination of the plants that it feeds on, through excretion. Often maned wolves defecate on the nests of leafcutter ants. The ants then use the dung to fertilize their fungus gardens, but they discard the seeds contained in the dung onto refuse piles just outside their nests. This process significantly increases the germination rate of the seeds.[16]

Historically, in a few parts of Brazil, these animals were hunted down for some body parts, notably the eyes, that were believed to be good luck charms. Since its classification as a vulnerable species by the Brazilian government, it has received greater consideration and protection.

They are threatened by habitat loss and being run over by automobiles. Feral and domestic dogs pass on diseases to them, and have been known to attack them.

The species occurs in several protected areas, including the national parks of Caraça and Emas in Brazil. The maned wolf is well represented in captivity and has been bred successfully at a number of zoos, particularly in Argentina. The Smithsonian National Zoo Park has been working to protect maned wolves for nearly 30 years and coordinates the collaborative, inter-zoo Maned Wolf Species Survival Plan, which includes breeding maned wolves, studying them in the wild, protecting their habitat, and educating people about them.[7]

Although the maned wolf displays many fox-like characteristics, it is not closely related to foxes. It lacks the elliptical pupils found distinctively in foxes. The maned wolf's evolutionary relationship to the other members of the canid family makes it a unique animal.

Electrophoretic studies did not link Chrysocyon with any of the other living canids studied. One conclusion of this study is that the maned wolf is the only species among the large South American canids that survived the late Pleistocene extinction. Fossils of the maned wolf from the Holocene and the late Pleistocene have been excavated from the Brazilian Highlands.[17]

A study published in 2003 on the brain anatomy of several canids, placed the maned wolf together with the Falkland Islands wolf and with pseudo-foxes of the genus Pseudalopex.[18] One study based on DNA evidence, published in 2009, showed that the extinct genus Dusicyon, the Falkland Islands wolf and its mainland relative, was the most closely related species to the maned wolf in historical times, and that about seven million years ago it shared a common ancestor with that genus.[19] A 2015 study reported genetic signatures in maned wolves that are indicative of population expansion followed by contraction and that took place during Pleistocene interglaciations approximately 24000 years before present.[20]

The maned wolf is not closely related to any other living canid. It is not a fox, wolf, coyote, dog, or jackal, but a distinct canid. Although based only on morphological similarities, it previously had been placed in Canis and Vulpes genera.[3] Its closest living relative is the bush dog (genus Speothos) and it has a more distant relationship to other South American canines (the short-eared dog, the crab-eating fox, and the 'false foxes' or Pseudalopex).[21]