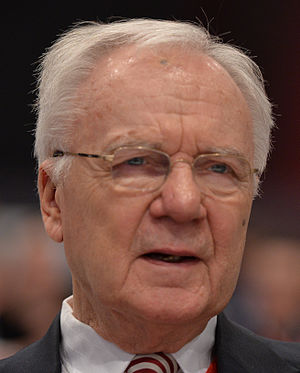 Manfred Stolpe (born May 16, 1936) was Federal Minister of Transport, Building and Housing of the Federal Republic of Germany from 2002 until 2005. From 1990 until 2002 he was Minister President of Brandenburg.

Stolpe was born in Stettin (Szczecin). He studied law in Jena (East Germany) (1955–1959). In 1959 he became active in the Protestant Evangelical Church in Berlin-Brandenburg, then comprising East and West Berlin and the region of Brandenburg, and was a guest student at the Free University of Berlin until 1961.

Between 1962 and 1969 he was Head of the Secretariat of the Conference of Governing Bodies of the Evangelical Churches in the German Democratic Republic (GDR). After this he became Head of the Secretariat of the Federation of Evangelical Churches (GDR), a post which he held until 1981. During this time he was appointed to the World Council of Churches "Commission on International Relations".

In 1982 Stolpe became Consistorial President of the Eastern Region of the then divided Evangelical Church in Berlin-Brandenburg and, as such, a member of the Conference of Governing Bodies of the Evangelical Churches in the GDR; at the same time he was one of the two deputy chairmen of the Federation of Evangelical Churches. He gave up these positions in 1990 and 1989 respectively.

In July 1990 he joined the Social Democratic Party of Germany (SPD) and on 14 October of that year he was elected to the Brandenburg State Assembly. Shortly afterwards, on November 1, 1990 he was elected Premier of the State of Brandenburg. He was re-elected twice and he held the position until his resignation on June 26, 2002. From May 1991 to June 26, 2002 he was a Member of the SPD National Executive. From October 22, 2002 to November 2005 Federal Minister of Transport, Building and Urban Affairs.

He married Ingrid Stolpe, a medical doctor (now retired) in 1961, and has one child.

The couple have both received treatment for cancer, a subject on which they have written a book and spoken on television.[1]