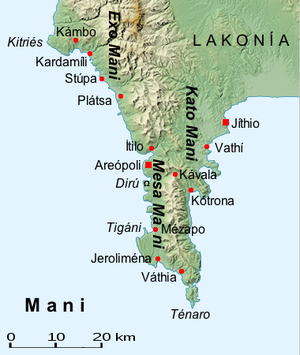 The Mani Peninsula (Greek: Μάνη, Mánē), also long known by its medieval name Maina or Maïna (Μαΐνη), is a geographical and cultural region in Greece. The capital city of Mani is Areopoli. Mani is the central peninsula of the three which extend southwards from the Peloponnese in southern Greece. To the east is the Laconian Gulf, to the west the Messenian Gulf. The peninsula forms a continuation of the Taygetos mountain range, the western spine of the Peloponnese. Mani is home of the Maniots (Mανιάτες, Maniátes in Greek).

The name "Mani" may come from the name of the Venetian castle le Grand Magne.[1] 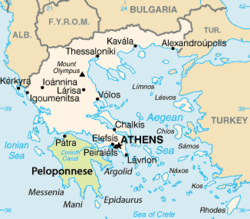 The terrain is mountainous and inaccessible.

Until recent years many Mani villages could be reached only by sea. Today a narrow and winding road extends along the west coast from Kalamata to Areopoli, then south to Akrotainaro (the pointy cape which is the most southward soil of continental Greece) before it turns north toward Gytheio. Another road, that is used from the public buses in the line Piraeus - Mani and exists several decades now, comes from Tripoli through Sparta, Gytheio, Areopoli and ends in the Gerolimenas port near Cape Matapan.

Mani has been traditionally divided into three regions:

A fourth region named Vardounia (Βαρδούνια) to the north is also sometimes included but was never historically part of Mani. Vardounia served as a buffer between the Ottoman-Turkish controlled Evrotas plains and Mani. A contingent of Muslim Albanian settlers were relocated to the region by the Ottomans. These settlers formed a large segment of the local population until the Greek War of Independence when they fled to the Turkish stronghold at Tripoli.[2] Following the war Vardounia's Greek population was reinforced by settlers from Lower Mani and central Laconia.

Administratively, Mani is now divided between the prefectures of Laconia (Kato Mani, Mesa Mani) and Messenia (Exo Mani), in the periphery of Peloponnesos, but in ancient times it lay entirely within Laconia, the district dominated by Sparta. The Messenian Mani (also called aposkiaderi, a local expression meaning "shady") receives somewhat more rainfall than the Laconian (called prosiliaki, a local expression meaning "sunny"), and is consequently more productive in agriculture. Maniots from what is now Messenian Mani have surnames that uniformly end in -éas, whereas Maniots from what is now Laconian Mani have surnames that end in -ákos; additionally there is the -óggonas ending, a corruption of éggonos, "grandson". 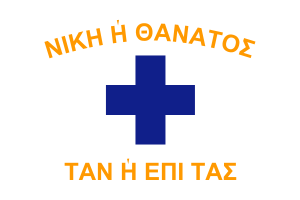 The flag of Mani (unofficial). 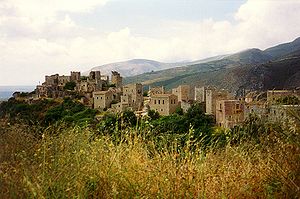 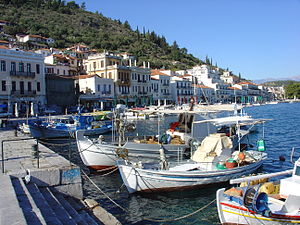 The port of the city of Gytheio.

Neolithic remains have been found in many caves along the Mani coasts. Homer refers to a number of towns in the Mani region, and some artifacts from the Mycenaean period (1900 BC - 1100 BC) have been found. The area was occupied by the Dorians in about 1200 BC, and became a dependency of Sparta. After Spartan power was destroyed in the 3rd century BC, Mani remained self-governing.

As the power of the Byzantine Empire declined, the peninsula drifted out of the Empire's control. The fortress of Maini in the south became the area's centre. Over the subsequent centuries, the peninsula was fought over by the Byzantines, the Franks, and the Saracens.

After the Fourth Crusade in 1204 AD, Italian and French knights (known collectively by the Greeks as Franks) occupied the Peloponnese and created the Principality of Achaea. They built the fortresses of Mystras, Passavas, Gustema (Beaufort), and Great Maina. The area fell under Byzantine rule after 1262, forming part of the Despotate of the Morea.

In 1460, after the fall of Constantinople, the Despotate fell to the Ottomans. Mani was not subdued and retained its internal self-government in exchange for an annual tribute, although this was only paid once. Local chieftains or beys governed Mani on behalf of the Ottomans:

'The first of these rulers, Liberakis Yerakaris, reigned in the middle of the seventeenth century. By the age of twenty he had served several years as an oarsman in the Venetian galleys and made himself the foremost pirate of the Mani. Captured by the Turks and condemned to death, he was reprieved by the Grand Vizier---the great Albanian Ahmet Küprülü---on condition that he accepted the hegemony of the Mani. He undertook the office in order to avenge himself on the strong Maniot family of the Stephanopoli with which he was in feud. He at once besieged them in the fort of Vitylo and captured thirty-five of them whom he executed on the spot. For the next twenty years he used his power and influence with the Sublime Porte to campaign all over Greece at the head of formidable armies, siding now with the Turks, now with the Venetians, marrying the beautiful princess Anastasia, niece of a Voivode of Wallachia (a member of the Duca family), ending his life, after adventures comparable to anything in the annals of the Italian condottiere, as Turkish Prince of the Mani and Venetian Lord of the Roumeli and Knight of St. Mark. The Turks did not repeat the experiment for a hundred years. [...] [Later,] during the forty-five years from 1776 to 1821, when the War of Independence broke out, the Mani was ruled by eight successive Beys, all except one of whom played the dangerous game of maintaining the interests of the Mani and of eventual Greek freedom while trying to remain on the right side of the Turks. [These were:] Zanetos Koutipharis (3 years), Michaelbey Troupakis (3 years), Zanetbey Kapetanakis Grigorakis (14 years), Panayoti Koumoundouros (5 years), Antonbey Grigorakis (7 years), Zervobey (2 years), Thodorbey Zanetakis (5 years) and the Petrobey Mavronichalis (6 years).'[3]

As Ottoman power declined, the mountains of the Mani became a stronghold of the klephts, bandits who also fought against the Ottomans. There is also evidence of a sizeable Maniot emigration to Corsica sometime during the Ottoman years. Petros Mavromichalis, the last bey of Mani, was among the leaders of the Greek War of Independence. He proclaimed the revolution at Areopoli on March 17, 1821. The Maniots contributed greatly to the struggle, but once Greek independence was won, they wanted to retain local autonomy. During the reign of Ioannis Kapodistrias, they violently resisted outside interference, to the point of killing Kapodistrias.

In 1878 the national government reduced the local autonomy of the Mani, and the area gradually became a backwater; inhabitants abandoned the land through emigration, with many going to major Greek cities, as well as to western Europe and the United States. It was not until the 1970s, when the construction of new roads supported the growth of the tourist industry, that the Mani began to regain population and become prosperous.

Despite the region's aridity, Mani is known for its unique culinary products such as glina or syglino (pork or pork sausage smoked with aromatic herbs such as thyme, oregano, mint, etc. and stored in lard along with orange peel). Mani is also known for what some[who?] consider the world's best extra-virgin olive oil[citation needed], soft-pressed from partially ripened olives of the Koroneiki variety, which are organically grown on mountain terraces. The local honey is also of superior quality[citation needed].

Today the Mani's coastal villages are full of cafés and souvenir shops. The peninsula attracts visitors for its Byzantine churches, Frankish castles, sandy beaches and scenery. Some popular beaches during the summer are Kalogria and the beaches by Stoupa harbor, while Kardamyli and Agios Nikolaos have good pebble and sand beaches, too. The ancient tower houses of Mani (pyrgospita) are significant tourist attractions, and some offer accommodations for visitors. The Diros stalactite and stalagmite caves, near Oitylo, are also popular tourist destination. As they are partly underwater, visitors tour them in gondola-like boats.

Gytheio, Areopoli, Kardamyli, and Stoupa are filled with tourists during the summer months, but the region is generally quiet during the winter. Many inhabitants work as olive farmers, and devote the winter months to the olive harvest and processing. Some of the villages in the mountains are less tourist oriented and often have very few inhabitants.

The introduction of Christianity came late in the Mani: the first Greek temples began to be converted into Christian churches during the 11th century A.D. A Byzantine Greek monk called Nikon "the Metanoite" (Greek: Νίκων ὁ Μετανοείτε) was commissioned by the Church in the 9th century to spread Christianity to areas such as Mani and Tsakonia, which had remained Pagan. (He was sometimes said to be of Armenian origin or a Greek originally from Argos, but also said to be born in the Pontus.)

St. Nikon was sent to the Mani in the latter half of the 9th century to preach Christianity to the Maniots. Although the Maniots began to convert to Christianity in the 10th century due to Nikon's preaching, it took more than 200 years, i.e. until the 12th and 13th centuries, to eliminate most of the pagan Greek religion and traditions and for the Maniots to fully accept Christianity. After his sanctification by the Greek Orthodox Church, St. Nikon became patron saint of the Mani as well as Sparta.

Patrick Leigh Fermor wrote of them:

Sealed off from outside influences by their mountains, the semi-troglodytic Maniots themselves were the last of the Greeks to be converted. They only abandoned the old religion of Greece towards the end of the ninth century. It is surprising to remember that this peninsula of rock, so near the heart of the Levant from which Christianity springs, should have been baptised three whole centuries after the arrival of St. Augustine in far-away Kent.'[4]