Emanuel Shinwell, Baron Shinwell, CH, PC (18 October 1884 – 8 May 1986), known informally as Manny Shinwell, was a British trade union official, Labour politician and one of the leading figures of Red Clydeside.

Shinwell was born in Spitalfields, London, but his family moved to Glasgow, Scotland. His father was a Polish Jew who had a small clothing shop and his mother, a Dutch Jew, was a cook from London.[1] He educated himself in a public library and at the Kelvingrove Art Gallery. He enjoyed sport, particularly boxing, and he was the trainer of a local football team. He began his working life as a machinist in a clothing workshop. In 1903 he became active in the Amalgamated Union of Clothing Operatives, and joined the Glasgow Trades Council in 1906 as a delegate of that union.[citation needed]

In May 1911, he was seconded to help organise the seamen of Glasgow at the request of Havelock Wilson of the National Sailors' and Firemen's Union (NSFU). He played a prominent role in the six-week Glasgow seamen's strike which began on 14 June and which was part of a nationwide strike. He subsequently became the secretary of the Glasgow branch of the NSFU. In August 1912, he participated in a revolt against the union, which resulted in the Glasgow branch becoming part of the Southampton-based British Seafarers' Union (BSU). He was the local secretary of the BSU until it became part of the Amalgamated Marine Workers' Union (AMWU) in 1922, after which he served as National Organiser of the new organisation. In 1919, he gained national notoriety through his involvement in the Glasgow 40 Hours' Movement. This movement culminated in clashes between police and protesters in Glasgow's George Square. He was afterwards tried for incitement to riot and was sentenced to five months' imprisonment.[citation needed]

File:Emanuel Shinwell, 1918.jpg
Shinwell (standing) at an election meeting in 1918

An Independent Labour Party (ILP) member, he was elected as Member of Parliament (MP) for Linlithgowshire at the 1922 general election. He lost his seat in 1924, but was re-elected for Linlithgowshire at a by-election in 1928. In 1929 Ramsay MacDonald appointed him Financial Secretary to the War Office: Cowling says that MacDonald believed he had rescued Shinwell's ministerial career when no minister would take him. From 1930 Shinwell served as Secretary for Mines, an office he had previously held in 1924. He became a critic of Ramsay MacDonald's National Government, and in 1931 he again lost his seat.[citation needed]

He returned to the Commons in 1935 for Seaham, County Durham, after defeating MacDonald, whereafter he campaigned vigorously, along with left-wingers such as Aneurin Bevan, for Britain to support the Popular Front government in Spain against Franco in the Spanish Civil War. On 4 April 1938, during a heated House of Commons debate in which he had been criticising the government's foreign policy, he slapped the face of the Conservative MP Commander Robert Tatton Bower after Bower told him to "go back to Poland".[2] Shinwell had taken this to be an anti-semitic remark.[3] In May 1940 he refused a position in Winston Churchill's Coalition Government in the Ministry of Food. He became chairman of the Labour Party in 1942. He served in Clement Attlee's government after the Labour victory in 1945 as Minister of Fuel & Power, and he presided over the nationalisation of the mining industry. He insistence on the open cast mining of the park of the Wentworth Woodhouse estate, to the footsteps of the house, when the quality of the coal was poor, was viewed by its owners and the local mining community which opposed it as pure vindictiveness - an act of class warfare.[4] 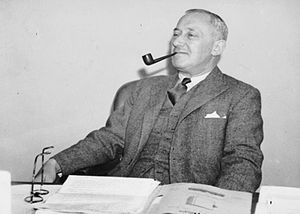 In 1947, Britain experienced, in an exceptionally severe winter, a serious coal shortage. He was widely criticised for his failure to avert this crisis. Shortly afterwards he took up the position of Secretary of State for War which he held until 1950. In November 1947 an MI5 report alleged that Shinwell had passed secret information to a man named "Stanley" who had passed it on to Zionist paramilitary group Irgun. Shinwell knew self-styled "contact man" Sidney Stanley whom he had approached for help in finding employment for his son Ernie, and Stanley had obtained information on the disbandment of the Transjordan Frontier Force from some government source.[5] His seat became Easington in 1950, at which point he became Minister of Defence.

Towards the end of his Commons career, he served as Chairman of the Parliamentary Labour Party, 1964-67. Shinwell was appointed to the Order of the Companions of Honour in the 1965 Birthday Honours[6] and was created a life peer as Baron Shinwell, of Easington in the County of Durham, on 19 June 1970.[7] He continued to be active in the House of Lords until shortly before his death.[8]

Shinwell died in May 1986, aged 101, holding the record for the second longest-lived British MP (after Theodore Cooke Taylor) until overtaken by Bert Hazell in November 2008. He became the longest lived peer on 26 March 1986, dying little over a month later on 8 May.

Shinwell sat for sculptor Alan Thornhill for a portrait[9] in clay.

The correspondence file relating to the Shinwell portrait bust is held as part of the Thornhill Papers (2006:56) in the archive[10] of the Henry Moore Foundation's Henry Moore Institute in Leeds and the terracotta remains in the collection of the artist. A bronze (accession number S.309) was purchased into the Collection of Glasgow City Art Gallery in 1973.[11]