The Mansell Wheel is a railway wheel patented by Richard Mansell, the Carriage and Wagon superintendent of the South Eastern Railway in the UK.[1] The design was created in the 1840s and was eventually widely used on passenger railway stock in the UK. This is an interesting example of a composite wooden wheel, using the same principle as an artillery wheel but with a solid wooden centre instead of spokes. The drawing (right) is from an old railway design book[2] from the early 20th Century.

The reason for using wood was to reduce the noise. Having a wooden centre eliminated the ringing noise that emanated from early railway wheels. Made from teak this type of wheel endured for a long time. Besides the reduction in noise there was an increased safety factor. While some of this might be attributed to the extra attention paid to what were specifically passenger carriage wheels, the potential for casting faults was also reduced.

The wooden centres acted as electrical insulators so Mansell wheels would not operate the track circuits used in railway signalling. However, this problem was solved by fitting copper bonding to the wheels. 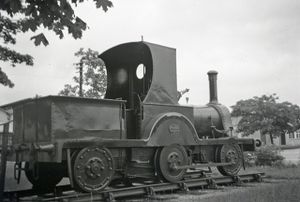 Mansell wheels were used almost exclusively on passenger coaches but there is one example of their use on a locomotive. The Shropshire and Montgomeryshire Railway's 0-4-2WT locomotive "Gazelle" has trailing wheels of the Mansell type. "Gazelle" is preserved at the Colonel Stephens Railway Museum.

The wooden segments of the wheel had a shorter life than other parts and so were replaced at intervals, usually because they had become loose in the wheel rim, not because the timber was otherwise damaged. This valuable teak was often re-used. As the segments were too short for most woodworking uses, they were typically re-used as wooden flooring blocks. These were particularly common for outdoor use in railway stations, around milk loading docks and platforms that handled postal traffic. These platforms were regularly in use overnight and the wooden blocks provided a quieter surface than cobblestones for the station's neighbours, even with iron-tyred carts running over them. An example of such a wood block pavement made from wheel segments survives at Liverpool's Edge Hill.