Mansfield University of Pennsylvania is a small, public, liberal arts university located in the borough of Mansfield, Tioga County, Pennsylvania. It is one of the fourteen state universities that are part of the Pennsylvania State System of Higher Education (PASSHE). On January 23, 2015, the University was accepted as the 29th member of the Council of Public Liberal Arts Colleges (COPLAC).[2] The university is accredited by the Middle States Association of Colleges and Secondary Schools and numerous national professional organizations. Mansfield University has 2,800 students and 160 faculty. The four core values of the University’s creed, which was developed in 1912, are Character, Scholarship, Culture, and Service.[3]

In 1862, Simon B. Elliott submitted application for Mansfield Classical Seminary to become a State Normal School. The application was accepted in December 1862, and Mansfield Classical Seminary became the Mansfield Normal School, the third state normal school in Pennsylvania. In 1874, the new ladies dormitory was built for a cost of $15,000. It would later be renamed North Hall. In 1892 at the Great Mansfield Fair electric lights were installed and a game of football was played between Mansfield Normal and Wyoming Seminary, ending in a draw. It is later recorded as the first night football game played in the United States. 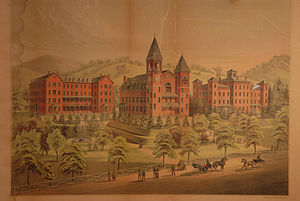 Postcard of Mansfield Normal School in the 1890s

During World War II, several hundred male students entered military service, and nurse training was initiated at MSTC. Most of the sports are suspended at the college for the duration of the war. Post war, sports resumed with MSTC capturing two consecutive State Championships in football for the 1946 and 1947 seasons. During the 1950s, both South Hall and Alumni Hall were replaced with new buildings.

In 1960, the Pennsylvania Department of Education granted the expansion of liberal arts programs to colleges in the system, including MSTC. MSTC became Mansfield State College. The campus continued to expand with the construction of other new buildings and new academic programs through the 1960s and 1970s.

On July 1, 1983, with passage of the State System of Higher Education bill, Mansfield State College became Mansfield University of Pennsylvania, and part of the new Pennsylvania State System of Higher Education. In 1992, the MU baseball team placed second in the NCAA Division II World Series, the highest finish for a Northern team to date. The team also advanced to the series in 1993 and 1994. Also that year, Mansfield University and Mansfield Borough celebrated the first Fabulous 1890s celebration. The first night football game was the subject of an advertising campaign by GE that year.

The newly renovated North Hall reopened for the fall semester. It holds the main, educational and music libraries as well as administrative office. The building received international attention for combining a state-of-the-art electronic library with a rich and stately Victorian environment. The university also received permission to keep the historic six-story atrium open.

On January 23, 2015, Mansfield University was approved as the 29th member of COPLAC - Council of Public Liberal Arts Colleges.

Mansfield fielded a football team dating back to the late 1800s, but discontinued the Division II varsity football program after the 2006 season, due to budgetary shortfalls. Starting in 2008, largely through the efforts of Sports Information Director Steve McCloskey, the University began competition in the Collegiate Sprint Football League.[7][8]

In 2013, a new artificial playing surface and lights were installed on Karl Van Norman Field. On September 14, 2013, Mansfield played Princeton University in a CSFL game, marking a return to night football in Mansfield after a 121-year absence. Mansfield defeated Princeton 24-14.[9] 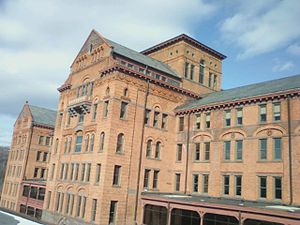 North Hall, a seven-story Victorian structure, was completed in 1878. For years, the upper floors served as a women's dormitory while the ground floor was used as the cafeteria. As the university grew and other buildings on the campus were built, North Hall severely deteriorated.

The building was closed in 1975, and the building was almost demolished. But pressure from campus and community leaders salvaged North Hall. $11 million was used to restore the building through state and private funding. In 1996 North Hall reopened as a library, providing state-of-the-art technology.

The first floor of the library comprises several private listening rooms, complete with a variety of audio equipment and a theatre-viewing room with 25 seats. The first floor also holds the Music Library, the library's collection of media, and the Education Library. The second floor hosts the Reference Collection, the Best-Seller Collection, Circulation Desk, Reception Room, and covered porches with over-stuffed wicker furniture.

The third floor hosts the Periodical Collection and The Microfilm Room and Newspaper Reading Room. The fourth floor features private study rooms and the classroom that features 20 ports that provide access to the campus computer network. The book stacks are located on the third and fourth floor. The library houses an abundance of desks and seating with over 450 ports throughout.