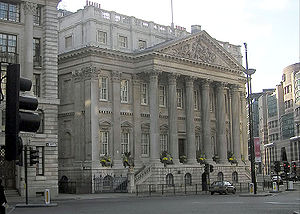 Mansion House is the official residence of the Lord Mayor of London. It is used for some of the City of London's official functions, including an annual dinner, hosted by the Lord Mayor, at which the Chancellor of the Exchequer customarily gives a speech – his "Mansion House Speech" – about the state of the British economy. The Guildhall is another venue used for important City functions. It is a Grade I Listed Building.[1] 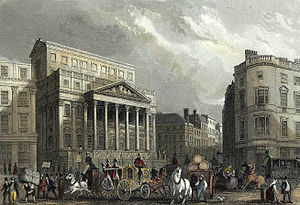 An 1837 view showing one of the two high attics. They were nicknamed the "Mayor's Nest" and "Noah's Ark". 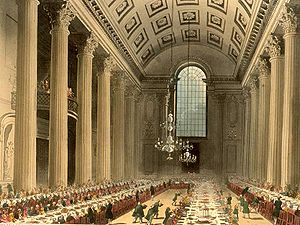 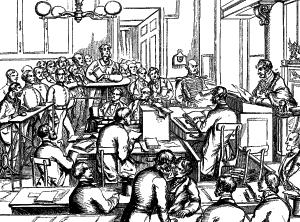 Mansion House was built between 1739 and 1752, in the then fashionable Palladian style by the City of London surveyor and architect George Dance the Elder. The site, at the east end of Poultry, had previously been occupied by the "Stocks Market", which by the time of its closure was mostly used for the sale of herbs.[2] The construction was prompted by a wish to put an end to the inconvenient practice of lodging the Lord Mayor in one of the City Halls. Dance won a design competition over solicited designs from James Gibbs and Giacomo Leoni, and uninvited submissions by Batty Langley and Isaac Ware.[3] Construction was slowed by the discovery of springs on the site, which meant piles had to be sunk to form the foundations.[2] The original building had two clerestory roof extensions, nicknamed the "Mayor's Nest" and "Noah's Ark". In 1795 George Dance the Younger re-roofed the central courtyard, and had the "Noah's Ark" demolished. In the same year, the original Grand Staircase was removed to make way for a further two rooms. In 1835 the entrance steps were reduced to one flight; and in 1842 the "Mayor's Nest" was demolished after the Ball Room was reconstructed. The Lord Mayor's private entrance in Walbrook was created in 1845; and in 1849 the former Swordbearer's Room was converted into the Justice Room, effectively the Magistrates Court of the City until 1999 when the court removed to a building on the opposite side of Walbrook.[4]

Mansion House has three main storeys over a rusticated basement. The entrance facade has a portico with six Corinthian columns, supporting a pediment with a tympanum sculpture by Sir Robert Taylor, in the centre of which is a symbolic figure of the City of London trampling on her enemies.[5] The building originally had two prominent and unusual attic structures at either end,[2] which were removed in 1794 and 1843. The building is on a confined site. Sir John Summerson wrote that "it leaves an impression of uneasily constricted bulk", adding that "on the whole, the building is a striking reminder that good taste was not a universal attribute in the eighteenth century".[3] The main reception room, the columned "Egyptian Hall", was so named because Dance used an arrangement of columns deemed to be "Egyptian" by Vitruvius. No Egyptian motifs were employed.[3] It has twenty niches for sculpture.[5] There was originally an open courtyard, later occupied by a saloon.[5]

The residence used to have its own court of law, since the Lord Mayor is the chief magistrate of the City while in office. There were eleven holding cells (ten for men and one, nicknamed "the birdcage", for women). A famous prisoner here was the early 20th-century suffragette women's rights campaigner Emmeline Pankhurst.

Mansion House is not generally open to the public. However, tours can be arranged through the diary office, and there are public tours most Tuesdays.

In A Connecticut Yankee in King Arthur's Court, Mark Twain recounted a story about the construction of the building:

It reminded me of something I had read in my youth about the ingenious way in which the aldermen of London raised the money that built the Mansion House. A person who had not taken the Sacrament according to the Anglican rite could not stand as a candidate for sheriff of London. Thus Dissenters were ineligible; they could not run if asked, they could not serve if elected. The aldermen, who without any question were Yankees in disguise, hit upon this neat device: they passed a by-law imposing a fine of £400 upon any one who should refuse to be a candidate for sheriff, and a fine of £600 upon any person who, after being elected sheriff, refused to serve. Then they went to work and elected a lot of Dissenters, one after another, and kept it up until they had collected £15,000 in fines; and there stands the stately Mansion House to this day, to keep the blushing citizen in mind of a long past and lamented day when a band of Yankees slipped into London and played games of the sort that has given their race a unique and shady reputation among all truly good and holy peoples that be in the earth.

Mansion House Street is the short street at the front of Mansion House, which connects Poultry, Queen Victoria Street and Bank junction above Bank Underground station.