Mantes-la-Jolie (French pronunciation: ​[mɑ̃t.la.ʒɔ.li], often informally called Mantes) is a commune based in the Yvelines department in the Île-de-France region in north-central France. It is located in the western suburbs of Paris, 48.4 km (30.1 mi) from the center of Paris. Mantes-la-Jolie is a sub-prefecture department.

Mantes was half way between the centres of power of the dukes of Normandy at Rouen and the Kings of France at Paris. Along with most of northern France, it changed hands frequently in the Hundred Years' War. Philip Augustus died at Mantes, 14 July 1223.

Louis XIV instituted the manufacture of musical instruments in Mantes, and it was chosen as the centre of brass and woodwind instrument manufacture. In the 19th century, painters were attracted to the town, particularly Corot, whose paintings of the bridge and the cathedral are celebrated. Prokofiev spent the summer of 1920 there orchestrating the ballet Chout.

Mantes was the location of the first allied bridgehead across the Seine on 19 August 1944, by General Patton's 3rd Army. Major rebuilding was needed after the war.

On 7 May 1953, the commune of Mantes-Gassicourt was officially renamed Mantes-la-Jolie (meaning "Mantes the pretty"), allegedly in reference to a letter of King Henry IV addressed to his mistress Gabrielle d'Estrées who resided in Mantes: "I am on my way to Mantes, my pretty". 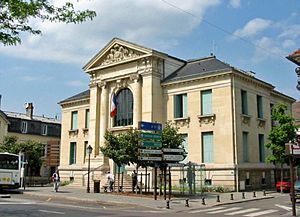 Le Val-Fourré, the largest housing project in the district, is extremely ghettoized, and is dominated by immigrants from the Maghreb, the majority of whom are Moroccan, and sub-Saharan immigrants, mostly from Senegal. It is the newest district of Mantes-la-Jolie, built in the sixties and seventies, home to 28,000 of the city's total 45,000 inhabitants.

The main monument in Mantes is the church of Notre-Dame dating back to 12th century. A previous church was burnt down by William the Conqueror together with the rest of the town, at the capture of which he lost his life in 1087. Modern bridges link Mantes with the town of Limay on the other side of the river.

Mantes is home to small businesses working on concrete and chemical processing, but is inevitably drawn into the economic area of nearby Paris.

It is historically and at present a center of musical instrument manufacturing. The well known Buffet-Crampon woodwind factory is located in the neighbourhood city of Mantes-la-Ville.

Mantes-la-Jolie is twinned with: