listen); Emilian and Latin: Mantua) is a city and comune in Lombardy, Italy, and capital of the province of the same name.

In 2016, Mantua will be Italian Capital of Culture, as chosen by the Italian Government on Tuesday the 27th of October 2015. In 2017, Mantua will also be European Capital of Gastronomy, included in the Eastern Lombardy District (together with the cities of Bergamo, Brescia and Cremona).

In 2007, Mantua's centro storico (old town) and Sabbioneta were declared by UNESCO to be a World Heritage Site. Mantua's historic power and influence under the Gonzaga family has made it one of the main artistic, cultural, and especially musical hubs of Northern Italy and the country as a whole. Mantua is noted for its significant role in the history of opera; the city is also known for its architectural treasures and artifacts, elegant palaces, and the medieval and Renaissance cityscape. It is the place where the composer Monteverdi premiered his opera L'Orfeo and where Romeo was banished in Shakespeare's play Romeo and Juliet. It is the nearest town to the birthplace of the Roman poet Virgil, who was commemorated by a statue at the lakeside park "Piazza Virgilio".

Mantua is surrounded on three sides by artificial lakes, created during the 12th century, as the city's defence system. These lakes receive water from the Mincio River, a tributary of the Po River which descends from Lake Garda. The three lakes are called Lago Superiore, Lago di Mezzo, and Lago Inferiore ("Upper", "Middle", and "Lower" Lakes, respectively). A fourth lake, Lake Pajolo, which once served as a defensive water ring around the city, dried up at the end of the 18th century.

The area and its environs are important not only in naturalistic terms, but also anthropologically and historically; research has highlighted a number of human settlements scattered between Barche di Solferino and Bande di Cavriana, Castellaro and Isolone del Mincio. These dated, without interruption, from Neolithic times (5th–4th millennium BC) to the Bronze Age (2nd–1st millennium BC) and the Gallic phases (2nd–1st centuries BC), and ended with Roman residential settlements, which could be traced to the 3rd century AD.

Mantua was an island settlement which was first established about the year 2000 BC on the banks of River Mincio, which flows from Lake Garda to the Adriatic Sea. In the 6th century BC, Mantua was an Etruscan village which, in the Etruscan tradition, was re-founded by Ocnus.[1][2]

The name may derive from the Etruscan god Mantus. After being conquered by the Cenomani, a Gallic tribe, Mantua was subsequently fought between the first and second Punic wars against the Romans, who attributed its name to Manto, a daughter of Tiresias. This new Roman territory was populated by veteran soldiers of Augustus. Mantua's most famous ancient citizen is the poet Virgil, or Publius Vergilius Maro, (Mantua me genuit), who was born in the year 70 BC at a village near the city which is now known as Virgilio.[3]

Fall of the Roman Empire

After the fall of the western Roman Empire in 476 AD, Mantua was invaded in turn by Goths, Byzantines, Longobards, and Franks. In the 11th century, Mantua became a possession of Boniface of Canossa, marquis of Tuscany. The last ruler of that family was the countess Matilda of Canossa (d. 1115), who, according to legend, ordered the construction of the precious Rotonda di San Lorenzo (or St. Lawrence's Roundchurch) in 1082. The Rotonda still exists today and was renovated in 2013.

After the death of Matilda of Canossa, Mantua became a free commune and strenuously defended itself from the Holy Roman Empire during the 12th and 13th centuries. In 1198, Alberto Pitentino altered the course of River Mincio, creating what the Mantuans call "the four lakes" to reinforce the city's natural protection. Three of these lakes still remains today and the fourth one, which ran through the centre of town, was reclaimed in the 18th century. 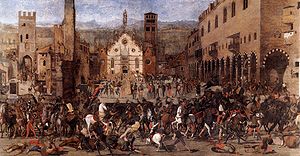 Expulsion of the Bonacolsi in 1328, scene of Piazza Sordello, canvas of Domenico Morone

During the struggle between the Guelphs and the Ghibellines, Pinamonte Bonacolsi took advantage of the chaotic situation to seize power of the podesteria in 1273. He was declared the Captain General of the People. The Bonacolsi family ruled Mantua for the next two generations and made it more prosperous and artistically beautiful. On August 16, 1328, Luigi Gonzaga, an official in Bonacolsi's podesteria, and his family staged a public revolt in Mantua and forced a coup d'état on the last Bonacolsi ruler, Rinaldo.

Ludovico Gonzaga, who had been Podestà of Mantua since 1318, was duly elected Captain General of the People. The Gonzagas built new walls with five gates and renovated the city in the 14th century; however, the political situation did not settle until the third ruler of Gonzaga, Ludovico III Gonzaga, who eliminated his relatives and centralised power to himself. During the Italian Renaissance, the Gonzaga family softened their despotic rule and further raised the level of culture and refinement in Mantua.[4] Mantua became a significant center of Renaissance art and humanism. Marquis Gianfrancesco Gonzaga had brought Vittorino da Feltre to Mantua in 1423 to open his famous humanist school, the Casa Giocosa.

Isabella d'Este, Marchioness of Mantua, married Francesco II Gonzaga, Marquess of Mantua in 1490. When she moved to Mantua from Ferrara (she was the daughter of Duke Ercole the ruler of Ferrara) she created her famous studiolo firstly in Castello di San Giorgio for which she commissioned paintings from Mantegna, Perugino and Lorenzo Costa. She later moved her studiolo to the Corte Vecchia and commissioned two paintings from Correggio to join the five from Castello di San Giorgio. It was unusual for a woman to have a studiolo in 15thC Italy given they were regarded as masculine spaces. Isabella was a vociferous collector and such was her reputation that Niccolo da Corregio called her 'la prima donna del mondo'. 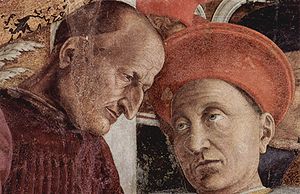 Ludovico Gonzaga receiving the news of his son Francesco being elected cardinal, fresco by Andrea Mantegna in the Stanza degli Sposi of Palazzo Ducale. 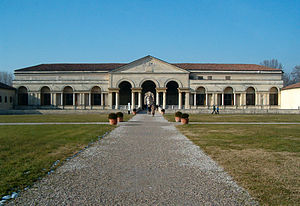 Through a payment of 120,000 golden florins in 1433, Gianfrancesco I was appointed Marquis of Mantua by the Emperor Sigismund, whose niece Barbara of Brandenburg married his son, Ludovico. In 1459, Pope Pius II held the Council of Mantua to proclaim a crusade against the Turks. Under Ludovico and his heirs, the famous Renaissance painter Andrea Mantegna worked in Mantua as court painter, producing some of his most outstanding works.

The first Duke of Mantua was Federico II Gonzaga, who acquired the title from the Holy Roman Emperor Charles V in 1530. Federico commissioned Giulio Romano to build the famous Palazzo Te, on the periphery of the city, and profoundly improved the city. In the late 16th century, Claudio Monteverdi came to Mantua from his native Cremona. He worked for the court of Vincenzo I Gonzaga, first as a singer and violist, then as music director, marrying the court singer Claudia Cattaneo in 1599.

From Gonzaga to Habsburg

In 1627, the direct line of the Gonzaga family came to an end with the vicious and weak Vincenzo II, and Mantua slowly declined under the new rulers, the Gonzaga-Nevers, a cadet French branch of the family. The War of the Mantuan Succession broke out, and in 1630 an Imperial army of 36,000 Landsknecht mercenaries besieged Mantua, bringing the plague with them. Mantua has never recovered from this disaster. Ferdinand Carlo IV, an inept ruler, whose only interest was in holding parties and theatrical shows, allied with France in the War of the Spanish Succession. After the French defeat, he took refuge in Venice and carried with him a thousand pictures. At his death in 1708, the Duke of Mantua was declared deposed and his family of Gonzaga lost Mantua forever in favour of the Habsburgs of Austria.

Under Austrian rule, Mantua enjoyed a revival and during this period the Royal Academy of Sciences, Letters and Arts, the Scientific Theatre, and numerous palaces were built.

In 1786, ten years before Napoleon Bonaparte's campaign of Europe, the Austrian Duchy of Mantua briefly united with the Duchy of Milan until 1791.

On June 4, 1796, Mantua was besieged by Napoleon's army as a move against Austria, who had joined the First Coalition against France. Austrian and Russian attempts to break the siege failed, but they were able to spread the French forces such thin enough that the siege was abandoned on 31 July. After diverting the French forces elsewhere, the French resumed the siege on August 24. In early February 1797, the city surrendered and the region came under French administration. Two years later, in 1799, the city was recaptured by the Austrians after the Siege of Mantua (1799).

Later, the city again passed into Napoleon's control and became a part of the Napoleon's Kingdom of Italy. In 1810 Andreas Hofer was shot by Porta Giulia, a gate of the town at Borgo di Porto (Cittadella) for leading the insurrection in the County of Tyrol against Napoleon.

After the brief period of French rule, Mantua returned to Austria in 1814, becoming one of the Quadrilatero fortress cities in northern Italy. Under the Congress of Vienna (1815), Mantua became a province in the Austrian Empire's Kingdom of Lombardy-Venetia. Agitation against Austria, however, culminated in a revolt which lasted from 1851 to 1855, but it was finally suppressed by the Austrian army. One of the most famous episodes of the Italian Risorgimento took place in the valley of the Belfiore, where a group of rebels was hanged by the Austrians.

At the Battle of Solferino (Franco-Austrian War) in 1859, the House of Savoy's Piedmont-Sardinia sided with the French Emperor Napoleon III against the Austrian Empire. Following Austria's defeat, Lombardy was ceded to France, who transferred Lombardy to Piedmont-Sardinia in return for Nice and Savoy.

Mantua, although a constituent province of Lombardy, still remained under the Austrian Empire along with Venetia. In 1866, Prussia-led North German Confederation sided with the newly established, Piedmont-led Kingdom of Italy against the Austrian Empire. The quick defeat of Austria led to its withdrawal of the Kingdom of Venetia (including the capital city, Venice). Mantua reconnected with the region of Lombardy and was incorporated into the Kingdom of Italy. 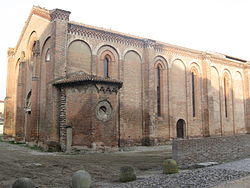 The Gonzagas protected the arts and culture, and were hosts to several important artists such as Leone Battista Alberti, Andrea Mantegna, Giulio Romano, Donatello, Peter Paul Rubens, Pisanello, Domenico Fetti, Luca Fancelli and Nicolò Sebregondi. Though many of the masterworks have been dispersed, the cultural value of Mantua is nonetheless outstanding, with many of Mantua's patrician and ecclesiastical buildings being uniquely important examples of Italian architecture.

Mantova railway station, opened in 1873, lies on the train routes of Milan-Codogno-Cremona-Mantua and Verona-Mantua-Modena. The station is a terminus of three regional lines, Mantova to Cremona and Milan, Mantova to Monselice, and Mantova to Verona Porta Nuova and Modena.

As with many European cities, Mantua has been the inspiration for the names of many other settlements, including:

Mantua, a municipality and city in the Pinar del Río Province of Cuba. 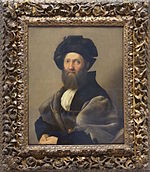