A manual is a musical keyboard designed to be played with the hands, on an instrument such as a pipe organ, harpsichord, clavichord, electronic organ, or synthesizer. The term "manual" is used with regard to any hand keyboard on these instruments to distinguish it from the pedalboard, which is a keyboard that the organist plays with his or her feet. It is proper to use "manual" rather than "keyboard," then, when referring to the hand keyboards on any instrument that has a pedalboard.

Organs and synthesizers can, and usually do, have more than one manual; most home instruments have two manuals, while most larger organs have two or three. Elaborate pipe and theater organs can have four or more manuals. The manuals are set into the organ console (or "keydesk").

The layout of a manual is roughly the same as a piano keyboard, with long, usually ivory or light-colored keys for the natural notes of the Western musical scale, and shorter, usually ebony or dark-colored keys for the five sharps and flats. A typical, full-size organ manual consists of five octaves, or 61 keys. (Piano keyboards, by contrast, normally have 88 keys.) Some smaller electronic organs may have manuals of four octaves or less (49, 44, or even 37 keys). Changes in registration through use of drawknobs, stop tabs, or other mechanisms to control organ stops allow such instruments to achieve an aggregate range well in excess of pianos and other keyboard instruments even with manuals of shorter size. 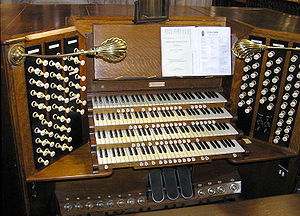 On smaller electronic organs and synthesizers, the manuals may span fewer octaves, and they may also be offset, with the lower one an octave to the left of the upper one. This arrangement encourages the organist to play the melody line on the upper manual as he plays the harmony line or chords on the lower manual.

On pipe organs each manual plays a specific subset of the organ's stops, and electronic organs can emulate this style of play. Synthesizers can program separate manuals to emulate sounds of various orchestral sections or instruments. On such instruments a performer can produce the sounds of an entire orchestra through his or her use of all available manuals in conjunction with the pedalboard and the various registration controls.

Despite the superficial resemblance to piano keyboards, organ manuals require a very different style of playing. Organ keys often require less force to depress than piano keys. When depressed, an organ key continues to sound its note at the same volume until the organist releases the key, unlike a piano key, whose note gradually fades away. On the other hand, while the pianist may allow the piano notes to continue to sound for a few moments after he lifts his hands from the keys by depressing the sustain pedal, organs have no corresponding control; the note invariably ceases when the organist releases the key (except on some modern electronic instruments and relatively contemporary upgrades to theatre pipe organ consoles). Another difference is that of dynamic control. Unlike the case of piano keys, the force with which the organist depresses the key has no relation to the note’s resonance; instead, the organist controls the volume through use of the expression pedals. While the piano note, then, can only decay, the organ note may increase in volume or undergo other dynamic changes. (Some modern electronic instruments allow for volume to vary with the force applied to the key and permit the organist to sustain the note and alter both its attack and decay in a variety of ways.) All of these variables mean that both the technique of organ playing and the resulting music are quite different from those of the piano. Nevertheless, the trained pianist may play a basic organ repertoire with little difficulty, although more advanced organ music will require specialized training and practice.

Types of manuals and related controls

Various other controls, such as stops, pistons, and registration presets are usually located adjacent to the manuals to allow the organist ready access to them as he or she plays; this further increases the instrument’s versatility. Devices known as couplers are sometimes available to link the manuals, so that the stops normally played on one can be played from another.