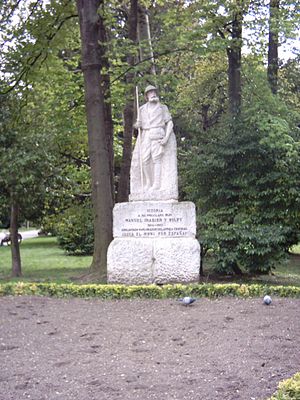 Statue of Manuel Iradier in Vitoria

Manuel Iradier (Vitoria, 1854–1911) was an exploratory Spanish Africanist. It followed the career of philosophy and letters, but his worry and Henry Morton Stanley's influence attracted it to the scientific exploration.

In 1868 he prepared a trip of exploration to the interior of Africa. This took him to the foundation of a company in the conviction of which there was necessary the collaboration of other persons who had the same worries. The above mentioned company was named by the explorer, who until 1874 undertook major preparatory works for the mentioned expedition.

In 1874 he made his initial preparatory trip of studies from the Gulf of Guinea, from where it would divide towards the interior. During the expedition, Iradier accompanied by other persons and by his wife and his sister-in-law, crossed almost 1,900 kilometres, from Aye up to the Muni River. After mending this one came up to another river, the Utamboni, to try to reach the region of the Great Lakes, and there to come to the river mouth of the Muni.

In the exploration he visited the islands of Corisco and Elobey Grande, as well as Inguinna and the end San Juan, the mentioned Aye, the rivers Muni, already mentioned, Utongo, Utamboni, also mentioned, and Bathe, as well as two mountain ranges, the Paluviole and the Saw of Crystal. From the latter he had to come back due to the abandon of the majority of the indigenous escort. It took contact with diverse peoples, since you avenge them, itemus, valengues, vicos, bijas, bapukus, bandemus and pamues. The sad note of the trip her put the death of his daughter, Isabel, born in the course of the same one.

His second trip of exploration began at the end of 1877. From the obtained information Iradier could map the visited zones, which would be published by the Company of Africanists and Colonistas of Madrid on his return to Spain; after this trip his plane had to be arranged by Coello. During the second trip he also obtained vocabularies and grammars of the languages of the tribes that he visited, as well as numerous annotations on astronomic, ethnographic, climatological and commercial observations.

The company managed to assemble the necessary funds in order that a few years later Iradier could organize a third expedition, beginning in July 1884. During this trip he was accompanied by the doctor Ossorio, who, as the own Iradier, was taking part as delegate of the Africanists' Company. The trip was limited to crossing the territories already explored in his first expedition and some other ones. It crossed the Muni River and explored its left shore; equally he explored the river Nonalready and already known Utamboni and Bathe. They managed to reach the navigable limit of the river Utongo, for from there happening for the river Cóngo up to the river Muni, from which they descended then to go to the coasts of the Buru, placed to the North-East of Corisco's Bay. They made trip on returning to Spain on 28 November 1884, due to the fact that Manuel Iradier afflicted of fevers, could not continue.

In February 1885 he delivered to the Company of Africanists and Colonists of Madrid diverse documents, contracts of annexation and notarial deeds, which gave like proved the incorporation of the territories of the river Muni to the sovereignty of Spain, by means of the obtaining of the recognition of the above mentioned sovereignty on the part of hundred one indigenous leaders, which were controlling a surface of 14.000 square kilometres. These territories, known later as the Spanish Guinea, remained under the sovereignty of Spain until 1968, in which they became independent and were named Equatorial Guinea. Equally, Iradier published numerous works in which he narrated his African experiences.