Manufacturing in the United Kingdom

Manufacturing in Britain expanded on an unprecedented scale in the 19th century. The growth was driven by international trading relationships Britain developed with Asia, Europe and the Americas, as well as entrepreneurialism, work ethic and the availability of natural resources such as coal. The main sectors were textiles, iron and steel making, engineering, and later ship building. Between 1809 and 1839 exports tripled, from £25 million to £76 million, while imports nearly doubled, from £28 million to £52 million during the same period. By 1849, exports were £124 million and imports were £79 million. In many industrial sectors, Britain was the largest manufacturer in the world and the most technologically advanced.[1][2][3][4]

In the later part of the 19th century, a second phase, sometimes know as the second industrial revolution, developed. Germany and later the United States caught up with and in the early 20th century overtook Britain as the world's largest manufacturers, although Britain remained one of the largest industrial producers. By the middle of the century, 1948, manufacturing (including utilities and oil and gas extraction) made up 48% of the UK economy. In the post-war decades, manufacturing began to lose its competitive advantage and heavy industry experienced a relative decline. By 2013 the percentage of manufacturing in the economy (including utilities and oil and gas extraction) had fallen to 13%, replaced by services which had risen from 46% to 79% over the same period.[5]

This trend is common in all mature Western economies.[6] Heavy industry, employing many thousands of people and producing large volumes of low-value goods (such as steelmaking) has either become highly efficient (producing the same amount of output from fewer manufacturing sites employing fewer people; for example, productivity in the UK's steel industry increased by a factor of 8 between 1978 and 2006[7]) or has been replaced by smaller industrial units producing high-value goods (such as the aerospace and electronics industries).[8]

Although the manufacturing sector's share of both employment and the UK's GDP has steadily fallen since the 1960s, data from the OECD shows that manufacturing output in terms of both production and value has steadily increased since 1945. A 2009 report from PricewaterhouseCoopers, citing data from the UK Office for National Statistics, stated that manufacturing output (gross value added at 2007 prices) has increased in 35 of the 50 years between 1958 and 2007, and output in 2007 was at record levels, approximately double that in 1958.[9]

Manufacturing employment fell faster in the UK since 1998. This started with manufacturing productivity flatlining from 1993 to 1997 and a rise in pound sterling. PricewaterhouseCoopers presumed that British manufacturing was less able to adapt to new production immune from Asian competition. Since 1993, the UK also invested less in R&D and adaptation than its OECD competitors.[citation needed] However, manufacturing remains an important sector of the modern British economy and the UK is one of the most attractive countries in the world for direct foreign industrial investment.[10] The Blue Book 2006 reports that this sector added gross value of £147,469 million to the UK economy in 2004.[11]

Engineering and allied industries comprise the single largest sector, contributing 30.8% of total Gross Value Added in manufacturing in 2003. Within this sector, transport equipment was the largest contributor, with 8 global car manufacturers being present in the UK. These include British makers now owned by overseas companies such as BMW (MINI, Rolls-Royce), Tata (Jaguar-Land Rover), Volkswagen (Bentley) and General Motors (Vauxhall Motors) and plants making vehicles under foreign ownership and branding such as Honda, Nissan and Toyota with a number of smaller, specialist manufacturers (including Lotus and Morgan) and commercial vehicle manufacturers (including Leyland Trucks, LDV, Alexander Dennis, JCB, the main global manufacturing plant for the Ford Transit, Manganese Bronze and Case-New Holland) also being present. The British motor industry also comprises numerous components for the sector, such as Ford's diesel engine plant in Dagenham, which produces half of Ford's diesel engines globally. 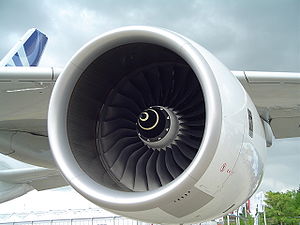 A range of companies like Brush Traction and Hunslet manufacture railway locomotives and other related components. Associated with this sector are the aerospace and defence equipment industries. The UK manufactures a broad range of equipment, with the sector being dominated by BAE Systems, which manufactures civil and defence aerospace, land and marine equipment; VT Group, one of the world's largest builders of warships; and GKN and Rolls Royce, who manufacture aerospace engines and power generation systems. Commercial shipbuilders include Harland and Wolff, Cammell Laird, Abels, Barclay Curle and Appledore. Companies such as Princess, Sealine, Fairline Boats and Sunseeker are major builders of private motor yachts.

Another important component of engineering and allied industries is electronics, audio and optical equipment, with the UK having a broad base of domestic firms, alongside a number of foreign firms manufacturing a wide range of TV, radio and communications products, scientific and optical instruments, electrical machinery and office machinery and computers.

Chemicals and chemical-based products are another important contributor to the UK's manufacturing base. Within this sector, the pharmaceutical industry is particularly successful, with the world's second and seventh largest pharmaceutical firms (GlaxoSmithKline and AstraZeneca respectively) being based in the UK and having major research and development and manufacturing facilities there. 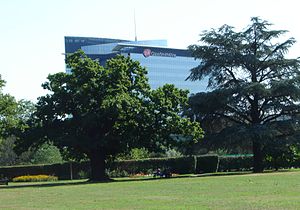 The headquarters of GlaxoSmithKline in Brentford

Other important sectors of the manufacturing industry include food, drink, tobacco, paper, printing, publishing and textiles. The UK is also home to three of the world's biggest brewing companies: Diageo, SABMiller and Scottish and Newcastle, other major manufacturing companies such as Unilever, Cadbury, Tate & Lyle, British American Tobacco, Imperial Tobacco, EMAP, HarperCollins, Reed Elsevier being amongst the largest present.