From Infogalactic: the planetary knowledge core
Jump to: navigation, search
For other uses, see Map (disambiguation).

In mathematics, the term mapping, usually shortened to map, refers to either

There are also a few, less common uses in logic and graph theory.

In many branches of mathematics, the term map is used to mean a function, sometimes with a specific property of particular importance to that branch. For instance, a "map" is a continuous function in topology, a linear transformation in linear algebra, etc.

Some authors, such as Serge Lang,[1] use "function" only to refer to maps in which the codomain is a set of numbers, i.e., a subset of the fields R or C, and the term mapping for more general functions.

Sets of maps of special kinds are the subjects of many important theories: see for instance Lie group, mapping class group, permutation group.

In the communities surrounding programming languages that treat functions as first class citizens, a map often refers to the binary higher-order function that takes a function ƒ and a list [v0,v1,...,vn] as arguments and returns [ƒ(v0),ƒ(v1),...,ƒ(vn)], s.t. n ≥ 0.

In category theory, "map" is often used as a synonym for morphism or arrow, thus for something more general than a function.[2]

In formal logic, the term is sometimes used for a functional predicate, whereas a function is a model of such a predicate in set theory. 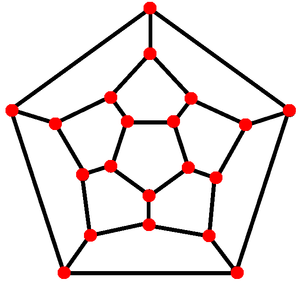 An example of a map in graph theory.

In graph theory, a map is a drawing of a graph on a surface without overlapping edges (an embedding). If the surface is a plane then a map is a planar graph, similar to a political map.[3]