Canals Barrera co-starred in a number of short-lived sitcoms, worked as a voice actress, and appeared in several films. She is best known for her role as Theresa Russo in the Disney Channel family sitcom, Wizards of Waverly Place (2007-2012). She played the role of Connie Torres in Camp Rock (2008) and Camp Rock 2: The Final Jam (2010) and co-starred as Lala Pinedo in Larry Crowne (2011). As a voice actress, she is known as Shayera Hol/Hawkgirl in Justice League and Justice League Unlimited. She also voiced the character of Sunset in the Disney Channel show, The Proud Family.

In 2014, Canals Barrera began starring as Daniela in the ABC comedy series, Cristela. She was set to co-star as Hilda in the ABC comedy-drama series Members Only; however, it got cancelled by ABC before its premiere.

Canals was born and raised in Miami, Florida to Cuban parents of Spanish (Catalan) descent.[1][2] Barrera also speaks Spanish and took drama classes in junior high.[3] She graduated from University of Miami in Coral Gables, Florida with a degree in theater.[2]

In early years, Canals Barrera has worked extensively in theater in both Miami and Los Angeles. In 1992 she began starring on Telemundo Spanish-language telenovela Marielena. She later had the recurring role in the short-lived 1993 Fox comedy-drama series, Key West. In 1996 she was nominated for an Ovation Award for her performance in the stage play Changes of Heart.[2] During 1990s, Canals also guest starred in a number of television series, such as 21 Jump Street, Murder, She Wrote, Almost Perfect, and Caroline in the City. Her first regular role was on the short-lived NBC sitcom, The Tony Danza Show in 1997. 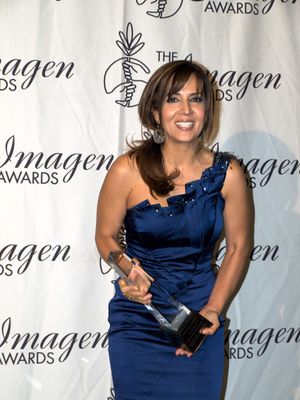 In early 2000s, Canals Barrera had supporting roles in films America's Sweethearts, The Master of Disguise and Imagining Argentina. She has gained much recognition with comic book fans in recent years for her role as Hawkgirl/Shayera Hol on Bruce Timm's Justice League (2001-04) and Justice League Unlimited (2005-06) series. She also had a recurring role in Static Shock as Shelly Sandoval, a news reporter, and in Danny Phantom as Danny Fenton/Phantom's high school crush, Paulina. She also performed the voice of Mercedes "Meche" Colomar in the 1998 video game Grim Fandango. Canals also played incidental characters in two episodes on the TV series The Boondocks ("Grandad's Fight" and "Home Alone").

From 2007 to 2012, Canals Barrera co-starred as Theresa Russo, the mother of lead character, in the Disney Channel family sitcom, Wizards of Waverly Place. She also co-starred in Wizards of Waverly Place: The Movie, a 2009 Disney Channel Original movie based on series. Canals Barrera also appeared in the Disney Channel Original Movies Camp Rock (2008) and Camp Rock 2: The Final Jam (2010), alongside Demi Lovato in the role of her mother, Connie Torres. In 2011 she appeared opposite Tom Hanks and Julia Roberts in the romantic comedy film Larry Crowne.

In 2014, Canals Barrera was cast as Hilda, the house manager of the country club where most of the action takes place, in the ABC soapy comedy-drama series, Members Only created by Susannah Grant.[4] Later in that year she joined the cast of ABC comedy series, Cristela, as Cristela Alonzo's character sister.[5]

In 1990, Canals married actor David Barrera.[2] She lives with her husband and their two daughters, Bridget and Madeleine in Los Angeles, California, while a large percentage of her extended family lives in Miami, FL.[citation needed]