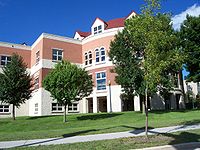 As of 2012, the Marathon County Public Library system serves a population of 134,735 people, with more than 75,000 active library card-holders in Marathon County alone. (Any Wisconsin resident may obtain a library card through MCPL.) Its collection contains 313,008 books, 29,703 audio and video materials, 607 magazine and newspaper titles in print, access to thousands of magazines and newspapers electronically, and 247 art prints.

The first library in Wausau was formed in 1871 by the Pine Knot Literary Society, a men’s literary club.[2] The club had more than 700 books, some of which were purchased and other were donated to the collection by the club members.[2] The library was kept in the offices of the Wisconsin River Pilot newspaper and residents could purchase membership to the club and the right to check out books for $3 per year or 25 cents per week.[3] In 1879, the Pine Knot Literary Society donated their library to the Ladies Literary Club of Wausau, who managed the collection under the same subscription arrangement until 1897, when the Wausau Free Public Library was established.[4] At this time, the city of Wausau agree to appropriate five percent of its license fees each year (between $600 and $1,750) to purchase books for the library.[3] Around this time, the library was moved to the northwest room on the second floor of the courthouse where it remained, rent free, for three years courtesy of the Marathon County board.[2]

By 1904, the library collection had moved several times – from the basement of a bank to a store building – and had no permanent home.[2] On July 5, 1904, the Wausau City Council adopted a resolution to accept a gift of $25,000 from steel magnate and philanthropist Andrew Carnegie to build a library building.[2] Walter and Sarah Alexander in 1905 donated the land from Walter’s uncle Walter McIndoe’s homestead to the city to use as a park and location for the library building.[2] On July 11, 1905, the library board accepted plans designed by architect George W. Maher and began construction.[2]

The new library 3,402 square foot building opened on April 3, 1907.[2] The first librarian was Nellie Silverthorn, daughter of Willis C. Silverthorn, a founding member of the Pine Knot Literary Society.[3] When the library opened, it held 4,968 books and served 4,785 registered users.[5]

By the 1920s, the library was overcrowded. According to a 1923 report, the library circulated 114,492 books and held 54,634 books in its collection.[7] The library board voted to put a 4,187 square foot addition onto the library, increasing the square footage to 15,200 square feet.[8] The addition also provided a community room with space for 300 people, committee meeting rooms and a kitchen.[9] The money for the $80,000 addition came from the estate of Mary Single Parcher, who had written a clause in her will establishing the Parcher Welfare Fund, to be used in a manner “most likely to promote the pleasure and happiness of the city of Wausau.” [9] The addition was dedicated on April 12, 1929.[10]

In 1937, the county established the Marathon County Library to help provide library services to the county, not just Wausau, as a Works Progress Administration project.[11] The Marathon County Library operated out of the Wausau Public Library for several years before moving operations to the Marathon County Courthouse Annex in 1951.[12] The Marathon County Library, in 1948, had a $5,000 budget and was given a $5,000 appropriate to purchase a bookmobile.[13] The county library operated all community libraries including the bookmobiles except the Wausau Public Library and the Joseph Dessert Library in Mosinee.[14] The library operated 15 library stations in the county, including in the communities of Athens, Brokaw, Edgar, marathon, Norrie, Rothschild, Spencer, Stratford, Unity, Halder, Radar Base (in the town of Harrison), Gad Community Center (Town of Bern), Cherokee (Colby), Mount View Sanitorium and the Nurses’ Home.[15]

The first bookmobile in Marathon County was purchased in 1949 and housed 3,000 books. The bookmobile made a circuit around the county every five weeks. (Boneske) The library purchased a second bookmobile in 1961.[18]

After about 75 years, the original Wausau library building was falling into disrepair. The building had cracked plaster, leaking roofs, drafty spaces and rotting rafters.[22] In 1990, the library closed for two weeks for asbestos removal.[23] Both the Wausau city council and the Marathon County board agreed that the library needed to be repaired, but could not agree on how to pay for the project.[22] Finally, on Feb. 11, 1992, the Wausau Common Council Committee of the Whole approved a plan in which the city would build the new library on the grounds of the existing building and lease it back to the county to recoup costs.[24] On Aug. 25, 1993, the city broke ground on the new library.[25] The project cost $5.3 million and the costs were split between the city of Wausau and Marathon County. (WDH Jan. 12, 1995) The new library opened on Jan. 3, 1995.[26]

The Marathon County Public Library is open seven days a week. Free Internet access is available, including wireless internet at all locations.