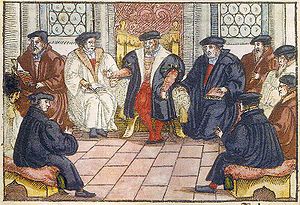 The Marburg Colloquy was a meeting at Marburg Castle, Marburg, Hesse, Germany which attempted to solve a disputation between Martin Luther and Ulrich Zwingli over the Real Presence of Christ in the Lord's Supper. It took place between 1 October and 4 October 1529. The leading Protestant reformers of the time attended at the behest of Philipp I of Hessen. Philipp's primary motivation for this conference was political; he wished to unite the Protestant states in political alliance, and to this end, religious harmony was an important consideration.

After the Diet of Speyer had confirmed the edict of Worms, Philipp I felt the need to reconcile the diverging views of Martin Luther and Ulrich Zwingli in order to develop a unified Protestant theology. Besides Luther and Zwingli, the reformers Stephan Agricola, Johannes Brenz, Martin Bucer, Caspar Hedio, Justus Jonas, Philipp Melanchthon, Johannes Oecolampadius, and Andreas Osiander participated in the meeting.

See also: The Sacrament of the Body and Blood of Christ—Against the Fanatics

Philipp hoped that rapport with Luther would lead to an alliance with Protestant princes and so strengthen his position against the Roman Catholic forces threatening him.

Although the two prominent reformers, Luther and Zwingli, found a consensus on fourteen points, they kept differing on the last one pertaining to the Eucharist: Luther maintained that by Sacramental Union, the consecrated bread and wine in the Lord's Supper were united to the true body and blood of Christ for all communicants to eat and drink; whereas, Zwingli considered bread and wine only symbols of the body and blood of Christ. On this issue they parted without having reached an agreement.

Underlying this disagreement was their theology of Christ. Luther believed that the human body of Christ was ubiquitous (present in all places) and so present in the bread and wine. This was possible because the attributes of God infused Christ's human nature. Luther emphasized the oneness of Christ's person. Zwingli, who emphasized the distinction of the natures, believed that while Christ in his deity was omnipresent, Christ's human body could only be present in one place, that is, at the right hand of the Father.[1] Because of the differences Luther initially refused to acknowledge Zwingli and his followers as Christians,[2] though following the colloquy the two Reformers showed relatively more mutual respect in their writings.[3]

At the later Diet of Augsburg the Zwinglians and Lutherans again explored the same territory as that covered in the Marburg Colloquy, and presented separate statements which showed the differences in opinion.