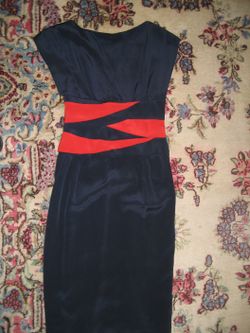 Marc Roger Maurice Louis Bohan, (born 22 August 1926, in Paris) is a French fashion designer, best known for his 30 year career at the house of Dior.[1]

Bohan was born in Paris and grew up in Sceaux. As a child, Marc Bohan was encouraged into fashion by his mother who worked as a milliner.[2]

After school at the Lycée Lakanal, in 1945 he secured a job at Robert Piguet where he remained for four years.

In 1949 he accepted a job as an assistant to Edward Molyneux. He worked as a designer for Madeleine de Rauch in 1952, before briefly opening his own Paris salon and producing one collection in 1953. In 1954, Bohan was offered a job at Jean Patou, designing the haute couture collection, where he stayed until 1958.

From 1958 to 1960 Bohan designed for the Christian Dior, London line. In September 1960, Dior’s creative director Yves Saint Laurent was called up for military service; Bohan was promoted to replace him.[3]

His deceptively-simple, elegant designs drew their inspiration from the 1920s, and rejected the extremes of contemporary fashion. One notable collection in 1966 was inspired by the Russian style of Dr Zhivago.[4]

Bohan's classic pieces are now found in museum collections around the world.[5] In 2009, the Musee Christian Dior at Granville held a major Bohan retrospective.[6]

In 1989 Bohan left Dior, before joining for the house of Norman Hartnell in London,[7] where he worked for the label until 1992. Bohan has since designed under his own name.

Jacqueline Kennedy admired Bohan's designs and had them adapted by Oleg Cassini and Chez Ninon.[10]

In 1976, Bohan was chosen to design the wedding dress of Silvia Sommerlath at her wedding to King Carl Gustaf of Sweden.[11]

Two years later, he designed the wedding gown of Princess Caroline of Monaco for her 1978 wedding to Philippe Junot.[12]

Bohan’s first wife, Dominique Gaborit, whom he married in 1950, died in 1962. He then married Huguette Rinjonneau. They had one daughter: Marie-Anne.

Bohan has a home at a restored 18th-century country house in Burgundy.[13]