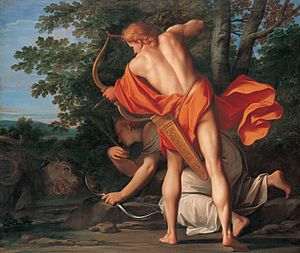 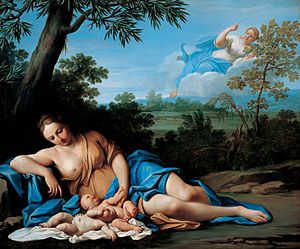 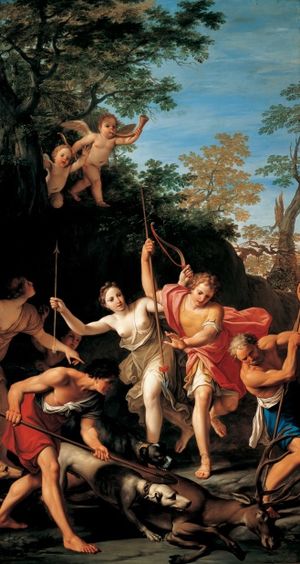 Marcantonio Franceschini (Italian pronunciation: [markanˈtɔːnjo frantʃeˈskiːni]; 1648 – 24 December 1729) was an Italian painter of the Baroque period, active mostly in his native Bologna. He was the father and teacher of Giacomo Franceschini.[1]

He was a pupil of Carlo Cignani, with whom he worked on the frescoes in the Palazzo del Giardino in Parma (1678–1681). He worked closely for many years with his brother-in-law, Luigi Quaini, who also was the cousin of Cignani.

Franceschini had a long career painting canvases on religious and mythological subjects for patrons throughout Europe. Franceschini decorated some ceilings in the Palazzo Ranuzzi[2] (1680) and the Palazzo Marescotti Brazzetti (1682) in Bologna. He helped paint in the tribune at church of San Bartolomeo Porta Ravegnana (1690). Franceschini frescoed the ceiling of the Sala d'Onore ("Hall of Honor") in the Ducal Palace of Modena, commissioned in 1696 for the marriage of Rinaldo d'Este to Princess Charlotte Felicity of Brunswick. He painted the altarpiece in the Cathedral of Finale Ligure and the canvas of San Carlo in the church of the same name in Modena.

His massive program of historical and mythological scenes in the Sala del Maggior Consiglio of the Palazzo Ducale of Genoa (1701–1704) were destroyed by a fire in 1777. These had been completed with the help of Tommaso Aldrovandini, Quaini, and Antonio Meloni. In addition, his decorations of the pendentives and lunettes of the Cathedral of Piacenza were removed in the late 19th century. He decorated the church of Corpus Domini (1688–1694) in Bologna.[3]

He painted 26 canvases of the Seductions and Loves of the Diana and Venus (1692-1700) for the Viennese palace (now Liechtenstein Museum) of Prince Johann Adam I of Liechtenstein. He also served as a buyer for the art-patron Prince.

In Genoa, he also painted for the palaces Spinola and the Palazzo Pallavicini (now Podestà) (1715) of Genoa. The latter had five large canvases of the history of Diana.

He painted the "cartoons" used to make the mosaic decoration of the Cappella del Coro in St. Peter's Basilica. Knighted by Pope Clement XI, he was founding a member and a subsequent director of the Clementine Academy in Bologna.

His paintings have an academic and idealist strain, even for a member of the Bolognese School of Painting. The sparse figures are severely arranged and often porcelain in features. He worked with a younger colleague, Donato Creti. His style is often classified as Barochetto, a mixture of baroque and rococo; but it also could be said the neoclassical influence of French artists was beginning to overtake the baroque tradition. Wittkower describes him as the "Bolognese Maratta".

The Dulwich Picture Gallery (London), the Honolulu Museum of Art, the Kunsthistorisches Museum of Vienna, the Metropolitan Museum of Art, the Musei Civici of Macerata, the Museo Glauco Lombardi (Parma, Italy), the National Art Gallery of Bologna (Italy), Bojnice Castle (Slovakia) and the State Museums of Florence are among the public institutions holding paintings by Marcantonio Franceschini.