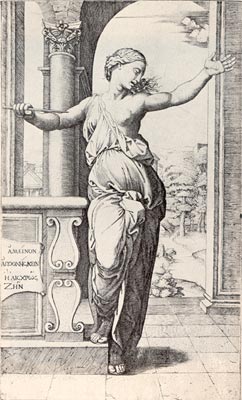 Lucretia, engraved by Raimondi after a design by Raphael.

Marcantonio Raimondi, also simply Marcantonio (c. 1480 – c. 1534), was an Italian engraver, known for being the first important printmaker whose body of work consists mainly of prints copying paintings. He is therefore a key figure in the rise of the reproductive print. He also systematized a technique of engraving that became dominant in Italy and elsewhere.

Marcantonio Raimondi was born around 1480-2, probably in Argine, near Bologna, Italy. Marcantonio received his training in the workshop of the famous goldsmith and painter of Bologna, Francesco Raibolini, best known as Francia. Vasari, a biographer, writes that Marcantonio quickly demonstrated more aptitude than Francia, and started designing and producing fashionable waist-buckles (among other items) in niello, engraved metal which is filled in with alloy in a contrasting colour. This is doubted, however, by Hind, who sees no evidence of a background in niello technique in his early engravings.

The Massacre of the Innocents, designed by Raphael.

No paintings produced by Marcantonio are known or documented, although some drawings survive. His first dated engraving, Pyramus and Thisbe, comes from 1505, although a number of undated works come from the years before this. From 1505–1511, Marcantonio engraved about 80 pieces, with a wide variety of subject matter, from pagan mythology, to religious scenes. His early works use his own compositions, combining elements from Francia and other North Italian artists, and like all Italian printmakers in these years he was strongly affected by the enormously accomplished prints of Dürer, which were widely distributed in Italy. Like other printmakers such as Giulio Campagnola, he borrowed elements of Dürer's landscapes in a cut and paste fashion, and also borrowed from his technique. Dürer was in Bologna in 1506, as was Michelangelo, and he may have met one or both of them. 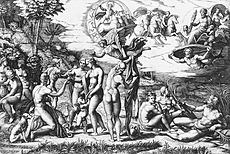 About this time he began to make copies of Dürer's woodcut series, the Life of the Virgin. This was extremely common practice, although normally engravers copied other expensive engravings rather than the cheaper woodcuts. However Dürer's woodcuts had raised the standard of the medium considerably, and since Marcantonio continued to copy a large number of both Dürer's engravings and woodcuts, he must have found it profitable.

His early copies included Dürer's famous AD monogram, and Dürer made a complaint to the Venetian Government, which won him some legal protection for his monogram, but not his compositions, in Venetian territory - an important case in the slowly evolving history of intellectual property law.

Marcantonio appears to have spent some of the last half of the decade in Venice, but no dates are known. 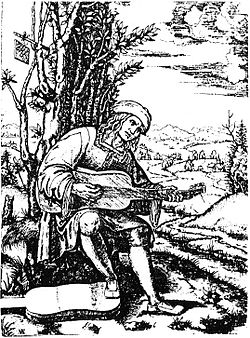 Around 1510, Marcantonio travelled to Rome and entered the circle of artists surrounding Raphael. This influence began showing up in engravings titled The Climbers (in which he reproduced part of Michelangelo's Soldiers surprised bathing, also called Battle of Cascina). After a reproduction of a work by Raphael, entitled Lucretia, Raphael trained and assisted Marcantonio personally.

Another famous engraving, the Judgement of Paris, dated 1515 or 1516, after Raphael, became the composition source for Édouard Manet when he painted The Luncheon on the Grass.

The two started a successful printing establishment under a colorgrinder, Il Baveria, that quickly expanded into an engraving school with Marcantonio at the head. Among his most distinguished pupils were Marco Dente (Marco da Ravenna), Giovanni Jacopo Caraglio and Agostino de Musi (Agostino Veneziano).

Marcantonio and his pupils continued to make engravings based upon Raphael's work, even after Raphael's death in 1520. In many instances, Marcantonio would not copy the finished painting, but would instead worked from early sketches and drafts. This method produced variations on a theme and were moderately successful.

During the Sack of Rome, in 1527, he was forced to pay a heavy ransom by the Spaniards and fled in poverty. It is unclear where he stayed after his departure from Rome until his death in 1534.

Reproductions of his works