Marcello José das Neves Alves Caetano (Portuguese pronunciation: [mɐɾˈsɛlu kɐiˈtɐnu], GCTE, GCC; 17 August 1906 – 26 October 1980), was a Portuguese politician and scholar, who was the last prime minister of the Estado Novo regime, from 1968 until his overthrow in the Carnation Revolution of 1974.

He was a son of José Maria de Almeida Alves Caetano and his first wife Josefa Maria das Neves. Graduated as a Licentiate and later a Doctorate in Law, Caetano was a Cathedratic Professor at the Faculty of Law of the University of Lisbon, where he graduated and of which he would also become the 9th Dean or Rector. A conservative politician and a self-proclaimed reactionary in his youth,[1] Caetano started his political career in the 1930s under the authoritarian regime of António de Oliveira Salazar. He soon became an important figure in the "Estado Novo" government, and in 1940 was appointed chief of the Portuguese Youth organisation. Caetano progressed in his academic career at the university, publishing several works and lecturing law. While in jail due to political causes, Álvaro Cunhal, law student, the future leader and founder of the Portuguese Communist Party, submitted his final thesis on the topic of abortion before a faculty jury that included Marcello Caetano. Between 1944 and 1947 Caetano was Minister of the Colonies and since 1947 President of the Executive Board of the National Union. He served as President of the Corporative Chamber between 1949 and 1955.

From 1955 to 1958 Caetano, was the number two of the regime, as Minister Attached to the Presidency of the Council of Ministers, second only to Salazar himself, who was approaching retirement age. His relationship with Salazar was tense at times, hindering him from becoming clearly a successor. Back to the academic career while maintaining formally important political functions such as executive president of the National Union, Caetano was the 9th Rector of the University of Lisbon from 1959 on, but the Academic Crisis of 1962 led him to resign after protesting students clashed with riot police in the university's campus. On the other hand, students who were supportive of the regime, tried to boycott the anti-regime activism. There were indeed three generations of militants of the radical right at the Portuguese universities and schools between 1945 and 1974, guided by a revolutionary nationalism partly influenced by the political sub-culture of European neofascism. The core of these radical students' struggle lay in an uncompromising defence of the Portuguese Empire in the days of the authoritarian regime.[2]

In August 1968, at 79, Salazar suddenly suffered a stroke after a fall in his home. After 36 years as prime minister of the Estado Novo regime, a personal creation, he was removed from power by President Américo Tomás. After weighing a number of choices, Tomás appointed Caetano to replace Salazar on 27 September 1968.[3] However, no one informed Salazar about this decision. By some accounts, when Salazar died in July 1970, he still believed he was prime minister.

Many people hoped that the new 102nd prime minister would soften the edges of Salazar's authoritarian regime and modernize the economy. Caetano moved on to foster economic growth and some social improvements, such as the awarding of a monthly pension to rural workers who had never had the chance to pay social security. The objectives of Caetano's pension reform were threefold: enhancing equity, reducing fiscal and actuarial imbalance, and achieving more efficiency for the economy as a whole, for example, by establishing contributions less distortive to labour markets or by allowing the savings generated by pension funds to increase the investments in the economy. Some large scale investments were made at national level, such as the building of a major oil processing centre in Sines. The economy reacted very well at first, but into the 1970s some serious problems began to show, due in part to two-digit inflation (from 1970 and on) and to the short-term effects of the 1973 oil crisis (despite the largely unexploited oil reserves that Portugal had in its overseas territories of Angola and São Tomé and Príncipe that by 1973 were being developed at a fast pace, and were promising sources of wealth in the medium- to long-term).

On the political side, Caetano's power was largely held in check by Tomás, who had been largely a figurehead under Salazar. This was due more to a balance of power and personalities than any constitutional provision. As a result, there wasn't much that Caetano actually could or was willing to do. He considered running for President, which would have given him more power, but dismissed the idea. Although Caetano had been one of the architects of the Estado Novo, he took some steps to blunt the harsher edges of the regime in the so-called "political spring" (also called Marcelist Spring – Primavera Marcelista). He referred to his regime as a "Social State." The PIDE, the dreaded secret police, was renamed the DGS (Direcção Geral de Segurança, General-Directorate of Security). He also eased press censorship and allowed the first independent labour unions since the 1920s. The opposition was allowed to run in the 1969 elections, though it was formally possible since 1945, but again with no realistic chance of winning any seats. The National Assembly was not conceived as a chamber for parties, but merely for popular representatives, chosen and elected on single lists. The 1969 and 1973 legislative elections changed little in that practice, and the National Union won all seats, as it happened before.

The changes from the "political spring" (or "evolution in continuity," as Caetano called it) didn't go far enough for large elements of the population who were eager for more freedom and had no memory of the instability that preceded Salazar. However, even these meager reforms had to be extracted with some effort from the more hardline members of the government, Tomás above all. At bottom, Caetano was still an authoritarian himself, and didn't understand democracy. He was very disappointed that the opposition was not content with the meager reforms that he was able to wring out of the hardliners. Indeed, the elections of 1969 and 1973, as in past elections, were characterized by harsh repression of opposition elements. After the 1973 poll, various hardliners in the Salazarist élite used their closeness to Tomás to pressure Caetano into abandoning his reform experiment. Caetano had little choice but to accept this, having expended nearly all of his political capital to enact his reforms in the first place. 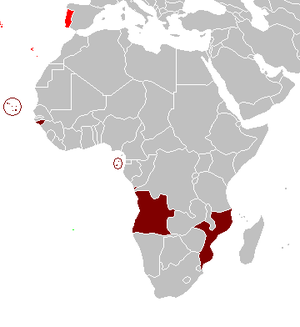 Portuguese overseas territories in Africa during the Estado Novo regime: Angola and Mozambique were by far the two largest of those territories.

Since the beginning of the 1960s, the Portuguese overseas provinces in Africa had been struggling for independence, but the government in Lisbon was not willing to concede and Salazar sent troops to fight the guerrilla and terrorism of the independence movements. By 1970, the war in Africa was consuming as much as 40% of the Portuguese budget and there was no sign of a final solution in sight. At a military level, a part of Guinea was de facto independent since 1973, but the capital and the major towns were still under Portuguese control. In Angola and Mozambique, independence movements were only active in a few remote countryside areas from where the Portuguese Army had retreated. However, their impending presence and the fact that they wouldn't go away dominated public anxiety. In addition, throughout the war period Portugal faced increasing dissent, arms embargoes and other punitive sanctions imposed by most of the international community.

After spending the early years of his priesthood in Africa, the British priest Adrian Hastings created a storm in 1973 with an article in The Times about the "Wiriyamu massacre" in Mozambique, revealing that the Portuguese Army had massacred 400 villagers at the village of Wiriyamu, near Tete, in December 1972.[4] His report was printed a week before Caetano was due to visit Britain to celebrate the 600th anniversary of the Anglo-Portuguese alliance. Portugal's growing isolation following Hastings's claims has often been cited as a factor that helped to bring about the "carnation revolution" coup which deposed the Caetano regime in 1974.[5]

By the early 1970s, while the counterinsurgency war was won in Angola, it was less than satisfactorily contained in Mozambique and dangerously stalemated in Portuguese Guinea from the Portuguese point of view, so the Portuguese Government decided to create sustainability policies in order to allow continuous sources of financing for the war effort in the long run. In 13 November 1972, a sovereign wealth fund (Fundo do Ultramar – The Overseas Fund) was enacted through the Decree Law Decreto-Lei n.º 448/ /72 and the Ministry of Defense ordinance Portaria 696/72, in order to finance the counterinsurgency effort in the Portuguese overseas territories.[6] In addition, new Decree Laws (Decree Law: Decretos-Leis n.os 353, de 13 de Julho de 1973, e 409, de 20 de Agosto) were enforced in order to cut down military expenses and increase the number of officers by incorporating irregular militia as if they were regular military academy officers.[7][8][9][10][11]

By the beginning of 1974, signals of rebellion increased. The Armed Forces Movement was formed within the army and started planning a coup d'état to end the Estado Novo. In March, an unsuccessful attempt against the regime was made. By that time, Caetano had offered his resignation to the President more than once, but it was denied. There was now little attempt or political possibility to control the opposition's movements. On 25 April 1974 the military overthrew the regime in the Carnation Revolution. There was almost no resistance.

The combined African independentist guerrilla forces of the People's Movement for the Liberation of Angola (MPLA), the National Union for the Total Independence of Angola (UNITA), and the National Liberation Front of Angola (FNLA), in Angola, PAIGC in Portuguese Guinea, and FRELIMO in Mozambique, succeeded in their nationalistic rebellion when their continued guerrilla warfare prompted elements of the Portuguese Armed Forces to stage a coup at Lisbon in 1974.[12][13] The Portuguese Armed Forces' Movimento das Forças Armadas overthrew the Lisbon government in protest of ongoing war in Portuguese Guinea that seemed to have no military end in sight, as well as in rebellion against the new Military Laws that were to be presented next year (Decree Law: Decretos-Leis n.os 353, de 13 de Julho de 1973, e 409, de 20 de Agosto) in order to cut down military expenses and incorporate militia and military academy officers in the Army branches as equals.[14][8][9][15][11]

Caetano resigned and was flown under custody to the Madeira Islands where he stayed for a few days. He then flew to exile in Brazil, where he died in Rio de Janeiro of a heart attack in 1980.[16]

According to the film April Captains (Capitães de Abril), Caetano, prior to boarding the plane that would take him to exile, thanked his captors for treating him well and wished them the best of luck with the country. In the film, the character of Caetano is played by the actor Ricardo Pais.

He was one of the world's top authorities in administrative law, some of his works being studied even in Soviet Universities. He also wrote Os nativos na economía africana in 1954. During his exile in Brazil, Caetano pursued academic activities, and published works on Administrative and Constitutional Law.