The Marco Polo Bridge Incident, also known as the Lugouqiao (Lugou Bridge) Incident (盧溝橋事變) or the July 7 Incident (七七事變), was a battle between the Republic of China's National Revolutionary Army and the Imperial Japanese Army, often used as the marker for the start of the Second Sino-Japanese War (1937–1945).

The Marco Polo Bridge, an eleven-arch granite bridge which gives its name to the incident, is an architecturally significant structure restored by the Kangxi Emperor (1662–1722) in 1698.

The battle is known by different names.

Tensions between the Empire of Japan and the Republic of China had been fanned since the Invasion of Manchuria in 1931 and subsequent creation of a puppet state, Manchukuo, with Puyi, the last monarch of the Qing Dynasty, as its sovereign. Although the Kuomintang (KMT) government of China refused to recognize Manchukuo, a truce between Japan and Republican China had been negotiated in 1931. However, at the end of 1932 the Japanese Army invaded Rehe Province (Jehol Province). This was annexed into Manchukuo in 1933.

Under the terms of the Boxer Protocol of 7 September 1901, China had granted nations with legations in Beijing the right to station guards at twelve specific points along railways connecting Beijing with Tianjin. This was to ensure open communications between the capital and the port. By a supplementary agreement on 15 July 1902, these forces were allowed to conduct maneuvers without informing the authorities of other nations in China.[4]

By July 1937, Japan had expanded its forces in China to an estimated 7,000 to 15,000 men, mostly along the railways. This number of men, and amount of concomitant matériel, was several times the size of those detachments deployed by the European powers, and greatly in excess of the limits set by the Boxer Protocol.[4]

By this time, the Imperial Japanese Army had already surrounded Beijing and Tianjin, with Japanese commanders seeking a justification to launch an attack.[5]

On the night of 7 July, the Japanese units stationed at Fengtai crossed the border to conduct military exercises.[5] Japanese and Chinese forces outside the town of Wanping—a walled town 10.2 miles southwest of Beijing—exchanged fire at approximately 23:00. The exact cause of this incident still remains a mystery today. When a Japanese soldier, Private Shimura Kikujiro, failed to return to his post, Chinese regimental commander Ji Xingwen (219th Regiment, 37th Division, 29th Route Army) received a message from the Japanese demanding permission to enter Wanping to search for the missing soldier. The Chinese refused. And, although Private Shimura returned to his unit, by this point both sides were mobilising, with the Japanese deploying reinforcements and surrounding Wanping.[5]

Later in the night, a unit of Japanese infantry attempted to breach Wanping's walled defences and were repulsed. An ultimatum by the Japanese was issued two hours later. As a precautionary measure, Qin Dechun, the acting commander of the Chinese 29th Route Army, contacted the commander of the Chinese 37th Division, General Feng Zhian, ordering him to place his troops on heightened alert. 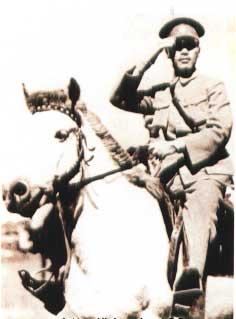 Generalissimo Chiang Kai-shek, Commander-in-Chief of the National Revolutionary Army, emerged from the Northern Expedition as the leader of China.

At 02:00 in the morning of 8 July, Qin Dechun, executive officer and acting commander of the Chinese 29th Route Army, sent Wang Lengzhai, mayor of Wanping, on a solo journey to the Japanese camp to conduct negotiations. However, this proved to be fruitless, and the Japanese insisted that they be let into the town to investigate the cause of the incident.[5]

At around 04:00, reinforcements of both sides began to arrive. The Chinese also rushed an extra division of troops to the area. About an hour or so later the Japanese Army opened fire and attacked the Marco Polo Bridge (690 feet west-southwest of Wanping), along with a modern railway bridge (1,095 feet north of the Marco Polo Bridge).

At 04:45, Wang Lengzhai had returned to Wanping, and on his way back he witnessed Japanese troops massing around the town. Within 5 minutes of Wang's return, shots were fired, thus marking the commencement of the Battle of Beiping-Tianjin, and, by extension, the full scale commencement of the Second Sino-Japanese War at 04:50 on 8 July 1937.[5]

A verbal agreement with Chinese General Qin was reached, whereby an apology would be given by the Japanese to the Chinese; punishment would be dealt to those responsible; control of Wanping would be turned over to the Hopei Chinese civilian constabulary and not to the Chinese 219th Regiment; and the Chinese would attempt to better control "communists" in the area. This was agreed upon, though Japanese Garrison Infantry Brigade commander General Masakazu Kawabe initially rejected the truce and, against his superiors' orders, continued to shell Wanping for the next three hours, until prevailed upon to cease and to move his forces to the northeast.

Although a ceasefire had been declared, further efforts to deescalate the conflict failed, largely due to actions by the Japanese China Garrison Army commanders and militarists within the Imperial Japanese Army General Staff. Japanese Garrison Infantry Brigade commander General Masakazu Kawabe ordered Wanping to be shelled on 9 July. The following day, Japanese armoured units joined the attack. The Chinese 219th regiment staged an effective resistance,[5] and full scale fighting commenced at Langfang on 25 July.[6] After launching a bitter and bloody attack on the Japanese lines on the 27 July, General Sung was defeated and forced to retreat behind the Yongding River by the next day.

On 11 July, in accordance with the Goso conference, the Imperial Japanese Army General Staff authorized the deployment of an infantry division from the Chosen Army, two combined brigades from the Kwangtung Army and an air regiment composed of 18 squadrons as reinforcements to Northern China. By 20 July, total Japanese military strength in the Beiping-Tianjin area exceeded 180,000 personnel.[5]

The Japanese gave Sung and his troops "free passage" before moving in to pacify resistance in areas surrounding Beijing and Tianjin. After 24 days of combat, the Chinese 29th Corps was forced to withdraw. The Japanese captured Beiping and the Taku Forts at Tianjin on 29 and 30 July respectively, thus concluding the Beiping-Tianjin campaign.[5] However, the Japanese Army had been given orders not to advance further than the Yongding River. In a sudden volte-face, the Konoe government's foreign minister opened negotiations with Chiang Kai-Shek's government in Nanjing and stated: "Japan wants Chinese cooperation, not Chinese land." Nevertheless, negotiations failed to move further than preparation. On 9 August 1937, a Japanese naval officer was shot in Shanghai, escalating the skirmishes and battles into full scale warfare. 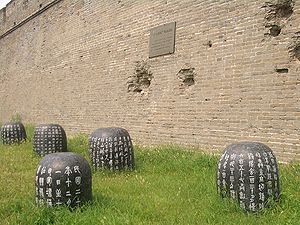 Damage from the Japanese shells on the wall of Wanping Fortress is marked with a memorial plaque now. The text on the stone drums below summarizes the history of the war that followed the incident

The heightened tensions of the Marco Polo bridge incident led directly to full-scale war between the Empire of Japan and China, with the Battle of Beiping–Tianjin at the end of July and the Battle of Shanghai in August.

In 1937, the Muslim warlord Ma Bufang notified the Chinese government that he was prepared to lead his army into battle against the Japanese during the Battle of Beiping–Tianjin.[7] Immediately after the Marco Polo Bridge Incident, Ma Bufang arranged for a cavalry division under the Muslim General Ma Biao to be sent east to battle the Japanese.[8] Ethnic Turkic Salar Muslims made up the majority of the first cavalry division which was sent by Ma Bufang.[9]

In 1987, the bridge was renovated and the People's Anti-Japanese War Museum was built near the bridge to commemorate the anniversary of the start of the Sino-Japanese War.[10]

There are some disputes among historians over the incident. Some historians believe the incident was an unintentional accident. Some believe that the incident may have been fabricated by the Japanese Army to provide a pretext for the invasion of China—a thesis supported by the expansionist colonial ambitions of Japan at the time. This reflected a sentiment felt by many Japanese at the time that "Asia should be ruled by Asians," replacing European colonial rulers with Japanese rulers throughout Asia.[11]

Japanese Society for the Dissemination of Historical Fact asserts that the incident "should not be called the start of a full-blown war".[13]

In comparison to their Japanese counterparts, the 29th Route Army, and generally all of the NRA for that matter, was poorly equipped and under-trained. Most soldiers were armed only with a rifle and a dadao (a single-edged Chinese sword similar to a machete). Moreover, the Chinese garrison in the Lugouqiao area was completely outnumbered and outgunned; it consisted only of about 100 soldiers.[1]

The Japanese China Garrison Army was a combined force of infantry, tanks, mechanized forces, artillery and cavalry, which had been stationed in China since the time of the Boxer Rebellion. Its headquarters and bulk for its forces were in Tianjin, with a major detachment in Beijing to protect the Japanese embassy.