From Infogalactic: the planetary knowledge core
(Redirected from Marcus Annaeus Lucanus)
Jump to: navigation, search
This article is about the Roman poet. For other uses, see Lucan (disambiguation). 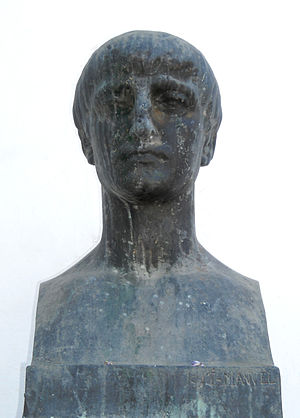 Marcus Annaeus Lucanus (November 3, 39 AD – April 30, 65 AD), better known in English as Lucan (/ˈluːkən/), was a Roman poet, born in Corduba (modern-day Córdoba), in the Hispania Baetica. Despite his short life, he is regarded as one of the outstanding figures of the Imperial Latin period. His youth and speed of composition set him apart from other poets.

Three brief ancient lives allow for the reconstruction of a modest biography – the earliest attributed to Suetonius, another to an otherwise unknown Vacca, and the third anonymous and undated – along with references in Martial, Cassius Dio, Tacitus's Annals, and one of Statius's Silvae. Lucan was the son of Marcus Annaeus Mela and grandson of Seneca the Elder; he grew up under the tutelage of his uncle Seneca the Younger. Born into a wealthy family, he studied rhetoric at Athens and was probably provided with a philosophical and Stoic education by his uncle.[1] 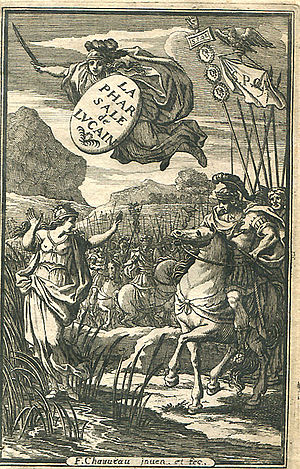 Engraved title page of a French edition of Lucan's Pharsalia, 1657

He found success under Nero, became one of the emperor's close friends and was rewarded with a quaestorship in advance of the legal age. In 60 AD, he won a prize for extemporizing Orpheus and Laudes Neronis at the quinquennial Neronia, and was again rewarded when the emperor appointed him to the augurate. During this time he circulated the first three books of his epic poem, Pharsalia (labelled De Bello civili in the manuscripts), which told the story of the civil war between Julius Caesar and Pompey.

At some point, a feud began between Nero and Lucan. Two very different accounts of the events have survived that both trivialize the feud. According to Tacitus, Nero became jealous of Lucan and forbade him to publish his poems.[2] According to Suetonius, Nero lost interest in Lucan and Lucan responded by writing insulting poems about Nero that Nero continued to ignore.[3]

Other works, though, point to a more serious basis to the feud. Works by the grammarian Vacca and the poet Statius may support the claim that Lucan wrote insulting poems about Nero. Vacca mentions that one of Lucan's works was entitled De Incendio Urbis (On the Burning of the City).[4] Statius's ode to Lucan mentions that Lucan described how the "unspeakable flames of the criminal tyrant roamed the heights of Remus."[5] Additionally, the later books of Pharsalia are anti-Imperial and pro-Republic. This criticism of Nero and office of the Emperor may have been the true cause of the ban.

Lucan later joined the 65 AD conspiracy of Gaius Calpurnius Piso against Nero. His treason discovered, he was obliged, at the age of 25, to commit suicide by opening a vein, but not before incriminating his mother, among others, in the hopes of a pardon. According to Tacitus, as Lucan bled to death, "(he) recalled some poetry he had composed in which he had told the story of a wounded soldier dying a similar kind of death and he recited the very lines. These were his last words."[6]

His father was involved in the proscription but his mother escaped. Statius's poem about Lucan was addressed to his widow, Polla Argentaria, upon the occasion of his birthday during the reign of Domitian (Silvae, ii.7, the Genethliacon Lucani).

According to Vacca and Statius, Lucan's works included:

Often attributed to him (but to others as well):