Marcus Terentius Varro (116 BC – 27 BC) was an ancient Roman scholar and writer. He is sometimes called Varro Reatinus to distinguish him from his younger contemporary Varro Atacinus.

Varro was born in or near Reate (now Rieti) to a family thought to be of equestrian rank, and always remained close to his roots in the area, owning a large farm in the Reatine plain, reported as near Lago di Ripa Sottile, until his old age. Politically, he supported Pompey, reaching the office of praetor, after having been tribune of the people, quaestor and curule aedile. He was one of the commission of twenty that carried out the great agrarian scheme of Caesar for the resettlement of Capua and Campania (59 BC).

During the civil war he commanded one of Pompey's armies in the Ilerda campaign. He escaped the penalties of being on the losing side in the civil war through two pardons granted by Julius Caesar, before and after the Battle of Pharsalus. Caesar later appointed him to oversee the public library of Rome in 47 BC, but following Caesar's death Mark Antony proscribed him, resulting in the loss of much of his property, including his library. As the Republic gave way to Empire, Varro gained the favour of Augustus, under whose protection he found the security and quiet to devote himself to study and writing.

Varro studied under the Roman philologist Lucius Aelius Stilo, and later at Athens under the Academic philosopher Antiochus of Ascalon. Varro proved to be a highly productive writer and turned out more than 74 Latin works on a variety of topics. Among his many works, two stand out for historians; Nine Books of Disciplines and his compilation of the Varronian chronology. His Nine Books of Disciplines became a model for later encyclopedists, especially Pliny the Elder. The most noteworthy portion of the Nine Books of Disciplines is its use of the liberal arts as organizing principles.[1] Varro decided to focus on identifying nine of these arts: grammar, rhetoric, logic, arithmetic, geometry, astronomy, musical theory, medicine, and architecture. Using Varro's list, subsequent writers defined the seven classical "liberal arts of the medieval schools".[1] 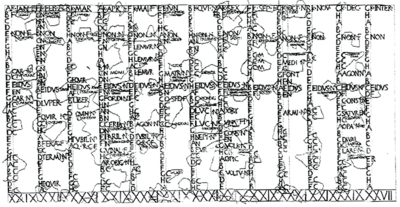 Fasti Antiates Maiores, an inscription containing the Roman calendar. This calendar predates the Julian reform of the calendar; it contains the months Quintilis and Sextilis, and allows for the insertion of an intercalary month

The compilation of the Varronian chronology was an attempt to determine an exact year-by-year timeline of Roman history up to his time. It is based on the traditional sequence of the consuls of the Roman Republic — supplemented, where necessary, by inserting "dictatorial" and "anarchic" years. It has been demonstrated to be somewhat erroneous but has become the widely accepted standard chronology, in large part because it was inscribed on the arch of Augustus in Rome; though that arch no longer stands, a large portion of the chronology has survived under the name of Fasti Capitolini.

Varro's literary output was prolific; Ritschl estimated it at 74 works in some 620 books, of which only one work survives complete, although we possess many fragments of the others, mostly in Gellius' Attic Nights. Called "the most learned of the Romans" by Quintilian (Inst. Or. X.1.95), Varro was recognized as an important source by many other ancient authors, among them Cicero, Pliny the Elder, Virgil in the Georgics, Columella, Aulus Gellius, Macrobius, Augustine, and Vitruvius, who credits him (VII.Intr.14) with a book on architecture.

His only complete work extant, Rerum Rusticarum Libri Tres (Three Books on Agriculture), has been described as "the well digested system of an experienced and successful farmer who has seen and practised all that he records."[2]

One noteworthy aspect of the work is his anticipation of microbiology and epidemiology. Varro warned his contemporaries to avoid swamps and marshland, since in such areas

"... there are bred certain minute creatures which cannot be seen by the eyes, but which float in the air and enter the body through the mouth and nose and cause serious diseases." (R.R. I.12.2) (The Mole magazine, Royal Society of Chemistry, March 2014 issue, p. 3)[3] 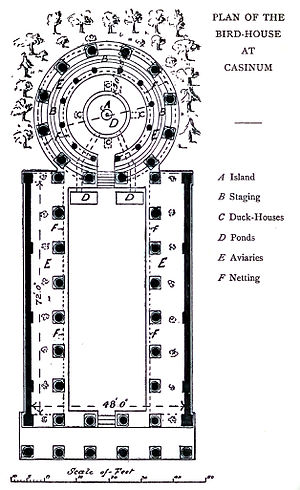 Plan of the birdhouse at Casinum designed and built by Varro