Marcus Welby, M.D. was an American medical drama television program that aired on ABC from September 23, 1969 to July 29, 1976. It starred Robert Young as a family practitioner with a kind bedside manner and James Brolin as the younger doctor he often worked with, and was produced by David Victor and David J. O'Connell. The pilot, A Matter of Humanities, had aired as an ABC Movie of the Week on March 26, 1969.

As with most medical dramas of the day, the plots often concerned a professional conflict between well-meaning physicians. Here, Dr. Welby's unorthodox way of treating patients was pitted against the more strait-laced methods of Dr. Steven Kiley (James Brolin). The catch with this particular program was that the roles were reversed in that Dr. Kiley was much younger than Dr. Welby. The opening credits of each episode reminded viewers of the generation gap between the two doctors, Welby driving his sedan and Kiley riding a motorcycle. Welby had served in the US Navy as a doctor during the war, and was a widower. He owned a sail boat and enjoyed the ocean.

The doctors worked alongside each other in their private practice in Santa Monica, California, regularly working in conjunction with the nearby Lang Memorial Hospital. (This was later revealed in exterior shots to be the real-life St. John's Hospital and Health Center in Santa Monica, California). At the office, their loyal secretary-nurse and friend was Consuelo Lopez (Elena Verdugo). Other characters that appeared throughout the years included Dr. Welby's frequent girlfriend Myra Sherwood (Anne Baxter), his daughter Sandy and her son Phil (first Christine Belford, then Anne Schedeen, as Sandy and Gavin Brendan as Phil), and Kathleen Faverty (Sharon Gless), another secretary. Dr. Kiley met and married public relations director Janet Blake (Pamela Hensley) in 1975, at the beginning of the show's last season on the air. 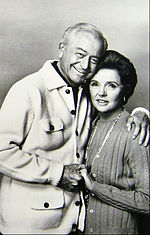 In the episode Designs (airdate on March 12, 1974), Young was reunited with his Father Knows Best co-star, Jane Wyatt; she played a fashion designer whose marriage to an embittered paraplegic led her to fall in love with the gentle doctor while keeping her marriage a secret most of the episode.

Its handling of many varied medical cases – some common, some uncommon – made it an instant hit for ABC. Story lines included impotence, depression, brain damage, breast cancer, mononucleosis, sexually transmitted diseases, epilepsy, learning disabilities, leukemia, dysautonomia, rape, Alzheimer's Disease and addiction to painkillers, among others. At its second season (1970–1971), it ranked #1 in the Nielsen ratings, becoming the first ABC show to top the list. The same year, both Young and Brolin won Emmy Awards for their work, as did the show for Outstanding Dramatic Series. Young won a Golden Globe in 1972 for his performance. Members of the American Academy of Family Physicians served as technical advisers for the series and reviewed every script for medical accuracy.

The show twice found itself at the center of controversy and protests by gay activists. In response to the 1973 episode "The Other Martin Loring", about a middle-aged man whom Welby advised to resist his homosexual impulses, the Gay Activists Alliance (GAA) zapped ABC, occupying its New York headquarters and picketing.[1] The next year, "The Outrage" sparked nationwide demonstrations because its story of a teenage student being sexually assaulted by his male teacher conflated homosexuality with pedophilia. Seven sponsors refused to buy television advertising time, and 17 television network affiliates refused to air the episode.[2][3] This was the first known instance of network affiliates refusing a network episode in response to protests.[4]

It was the first show in ABC's history to become the #1 show on television.

By the mid-1970s, the popularity of medical dramas began to wane. Ratings for both Marcus Welby, M.D. and CBS' Medical Center began to drop, as did the ratings for daytime dramas General Hospital and The Doctors. Previous episodes initially went into syndication in the fall of 1975 as Robert Young, Family Doctor (to avoid confusion with the first-run episodes still airing on ABC). The show ended its run in 1976 after a total of 169 episodes were made.

Shout! Factory (under license from Universal Studios Home Entertainment) has released the first two seasons of Marcus Welby, M.D. on DVD in Region 1.[9][10]