From Infogalactic: the planetary knowledge core
Jump to: navigation, search
This article is about the carnival. For other uses, see Mardi Gras (disambiguation).

Mardi Gras (/ˈmɑːrdiɡrɑː/), also called Shrove Tuesday,[1] or Fat Tuesday,[2][3][4][5][6] in English, refers to events of the Carnival celebrations, beginning on or after the Christian feasts of the Epiphany (Three King's Day) and culminating on the day before Ash Wednesday. Mardi Gras is French for "Fat Tuesday", reflecting the practice of the last night of eating richer, fatty foods before the ritual fasting of the Lenten season.

Related popular practices are associated with celebrations before the fasting and religious obligations associated with the penitential season of Lent. In countries such as England, Mardi Gras is also known as Shrove Tuesday, which is derived from the word shrive, meaning "confess".[1]

Popular practices on Mardi Gras include wearing masks and costumes, overturning social conventions, dancing, sports competitions, parades, debauchery, etc. Similar expressions to Mardi Gras appear in other European languages sharing the Christian tradition, as it is associated with the religious requirement for confession before Lent begins. In many areas, the term "Mardi Gras" has come to mean the whole period of activity related to the celebratory events, beyond just the single day. In some American cities, it is now called "Mardi Gras Day".[2][3][4][5][6]

The festival season varies from city to city, as some traditions, such as the one in New Orleans, Louisiana, consider Mardi Gras to stretch the entire period from Twelfth Night (the last night of Christmas which begins Epiphany) to Ash Wednesday.[7][8] Others treat the final three-day period before Ash Wednesday as the Mardi Gras.[9] In Mobile, Alabama, Mardi Gras-associated social events begin in November, followed by mystic society balls on Thanksgiving,[7][10] then New Year's Eve, followed by parades and balls in January and February, celebrating up to midnight before Ash Wednesday. In earlier times, parades were held on New Year's Day.[7] Other cities famous for Mardi Gras celebrations include Rio de Janeiro; Barranquilla, Colombia; George Town, Cayman Islands; Port of Spain, Trinidad and Tobago; Quebec City, Canada; Mazatlán, and Sinaloa, Mexico

Carnival is an important celebration in Anglican and Catholic European nations.[1] In the United Kingdom and Ireland, the week before Ash Wednesday is called "shrovetide", ending on Shrove Tuesday. It has its popular celebratory aspects, as well. Pancakes are a traditional food. Pancakes and related fried breads or pastries made with sugar, fat, and eggs are also traditionally consumed at this time in many parts of Latin America and the Caribbean. 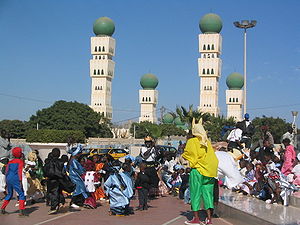 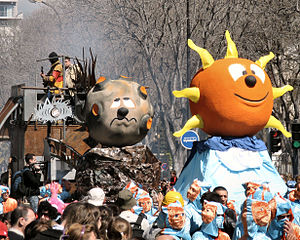 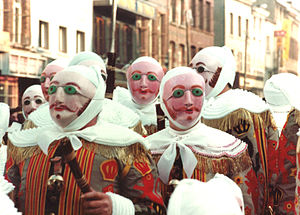 In Sydney, a parade is held, known as the Sydney Gay and Lesbian Mardi Gras, or simply "Mardi Gras". The event started as an attempt to bring about public acceptance of homosexuality and as a retaliation to police brutality in the 1970s.

In the Belgian city of Binche, the Mardi Gras festival is one of the most important days of the year and the summit of the Carnival of Binche. Around 1000 Gilles dance throughout the city from morning until past dusk, whilst traditional carnival songs play. In 2003, the "Carnival of Binche" was proclaimed one of the Masterpieces of the Oral and Intangible Heritage of Humanity by UNESCO.

Carnival is the most famous Brazilian holiday. During this time, Brazil attracts 70% of its tourists. Variations in carnival celebrations are observed throughout the multitude of Brazilian cities. Yet, a commonality observed among them is the incorporation of samba into the celebrations. The southeastern cities of Brazil have massive parades that take place in large sambadromes. The Rio Carnival is where two million people celebrate in the city. The city of Salvador holds a very large carnival celebration where millions of people celebrate the party in the streets of the city with a very big diversity of musical styles together. 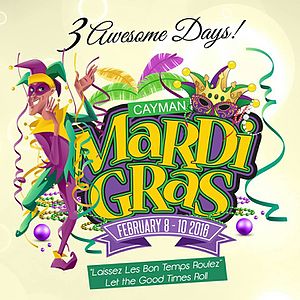 Cayman Mardi Gras has now been recognised as one of the island's National Festivals. Celebrating the traditional Fat Tuesday, they also host a festive Monday Food Festival as well as an all day EDM Ash Wednesday. The event attracts thousands of attendees during the 3 day festival and includes a line up of international celebrities and performers. The Cayman Mardi Gras Festival is slowly becoming a major tourist attraction to the island nation and with the large international presence will attract bigger performing names in the future.

Carnaval de Barranquilla is Colombia's Mardi Gras celebration. In 2003, it was proclaimed as one of the Masterpieces of the Oral and Intangible Heritage of Humanity by UNESCO.

The celebration on the same day in Germany knows many different terms, such as Schmutziger Donnerstag or Fetter Donnerstag (Fat Thursday), Unsinniger Donnerstag, Weiberfastnacht, Greesentag and others, and are often only one part of the whole carnival events during one or even two weeks before Ash Wednesday be called Karneval, Fasching, or Fastnacht among others, depending on the region. In Standard German, schmutzig means "dirty", but in the Alemannic dialects schmotzig means "lard" (Schmalz), or "fat";[11] "Greasy Thursday", as remaining winter stores of lard and butter used to be consumed at that time, before the fasting began. Fastnacht means "Eve of the Fast", but all three terms cover the whole carnival season. The traditional start of the carnival season is on November 11 at 11:11am (11/11 11:11).

In Italy Mardi Gras is called Martedì Grasso (Fat Tuesday). It's the main day of Carnival along with the Thursday before, called Giovedí Grasso (Fat Thursday), which ratifies the start of the celebrations. The most famous Carnivals in Italy are in Venice, Viareggio and Ivrea. Ivrea has the characteristic "Battle of Oranges" that finds its roots in medieval times. The Italian version of the festival is spelled Carnevale.[citation needed]

Main article: Carnival in the Netherlands

The Netherlands also has a festival similar to Mardi Gras. It's called Carnaval and is similar to the Venice Carnival. The origin of the word Carnaval is 'carnem levare' which means "to take away meat" in Latin. It marks the beginning of lent leading up to Easter.

The carnival in the Netherlands is mainly held in the southern part of the Netherlands in the provinces of Noord-Brabant and Limburg, some parts of Zeeland and in eastern parts of Twente and Gelderland. As with many popular festivals, people tend to loosen some moral codes and become laid-back or loose, which is based in the ancient role-reversal origins of Carnaval, including dressing in costumes.

In Sweden the celebration is called Fettisdagen, when you eat fastlagsbulle, more commonly called Semla. The name comes from the words "fett" (fat) and "tisdag" (Tuesday). Originally, this was the only day one should eat fastlagsbullar.[12] 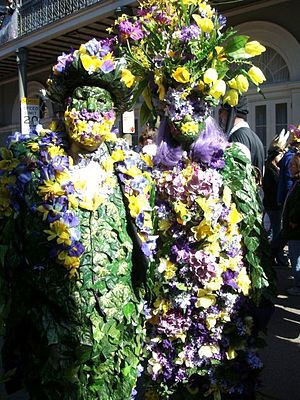 While not observed nationally throughout the United States, a number of traditionally ethnic French cities and regions in the country have notable celebrations. Mardi Gras arrived in North America as a French Catholic tradition with the Le Moyne brothers,[13] Pierre Le Moyne d'Iberville and Jean-Baptiste Le Moyne de Bienville, in the late 17th century, when King Louis XIV sent the pair to defend France's claim on the territory of Louisiane, which included what are now the U.S. states of Alabama, Mississippi, Louisiana and part of eastern Texas.[13]

The expedition, led by Iberville, entered the mouth of the Mississippi River on the evening of March 2, 1699, Lundi Gras. They did not yet know it was the river explored and claimed for France by René-Robert Cavelier, Sieur de La Salle in 1683. The party proceeded upstream to a place on the east bank about 60 miles downriver from where New Orleans is today, and made camp. This was on March 3, 1699, Mardi Gras, so in honor of this holiday, Iberville named the spot Point du Mardi Gras (French: "Mardi Gras Point") and called the nearby tributary Bayou Mardi Gras. Bienville went on to found the settlement of Mobile, Alabama in 1702 as the first capital of French Louisiana.[14] In 1703 French settlers in Mobile established the first organized Mardi Gras celebration tradition in what was to become the United States.[13][15][16][17] The first informal mystic society, or krewe, was formed in Mobile in 1711, the Boeuf Gras Society.[15] By 1720, Biloxi had been made capital of Louisiana. The French Mardi Gras customs had accompanied the colonists who settled there.[13] 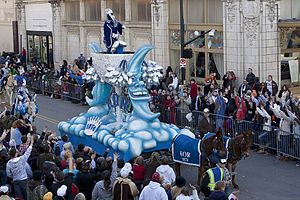 Knights of Revelry parade down Royal Street in Mobile during the 2010 Mardi Gras season.

In 1723, the capital of Louisiana was moved to New Orleans, founded in 1718.[14] The first Mardi Gras parade held in New Orleans is recorded to have taken place in 1837. The tradition in New Orleans expanded to the point that it became synonymous with the city in popular perception, and embraced by residents of New Orleans beyond those of French or Catholic heritage. Mardi Gras celebrations are part of the basis of the slogan, Laissez les bons temps rouler, (Let the good times roll).[13][not in citation given] Other cities along the Gulf Coast with early French colonial heritage, from Pensacola, Florida; Galveston, Texas; to Lake Charles and Lafayette, Louisiana; and north to Natchez, Mississippi, have active Mardi Gras celebrations. In the rural Acadiana area, many Cajuns celebrate with the Courir de Mardi Gras, a tradition that dates to medieval celebrations in France.[18] The American rock band Creedence Clearwater Revival created an album in 1972 called Mardi Gras