Her death has been the subject of a very persistent romantic legend.

Relationship with the king 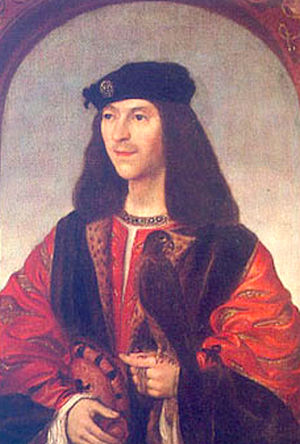 She was definitely the mistress of James IV during 1496-97, and possibly as early as 1495. Records show her living in his castle at Stirling from 3 June 1496, and from 30 October to March 1497 at Linlithgow Palace. Her presence,and a previous similar arrangement for another mistress in the royal houses, was also noted by the Spanish ambassador Pedro de Ayala.[1] Ayala later wrote of James IV:

"When I arrived, he was keeping a lady with great state in a castle. He visited her from time to time. Afterwards he sent her to the house of her father, who is a knight, and married her [to a third party]. He did the same with another lady, by whom he had had a son."[2]

However, the king had a number of mistresses in his time, and this relationship seems to have been shorter than those he had with either Marion Boyd or Janet Kennedy.

It is definitely known that in 1501 she died of food poisoning, along with her sisters Eupheme and Sibylla, while staying at their parents' residence. As a general rule, claims of poisoning made in relation to a historical figure who died after a sudden illness should be treated with caution, but in this case, with three people who presumably died shortly after eating the same meal, the contemporary judgement should be accepted. The three sisters are buried together in Dunblane Cathedral, their graves can still be seen in front of the altar. This did not cause a great deal of suspicion at the time; standards of food hygiene are unlikely to have been very good then, and cases of accidental food poisoning have happened in any period.

After her death the king paid for masses to be said for her soul, and continued to support their daughter.

It has been widely suggested in more recent years that Margaret Drummond was murdered, either by English agents or by pro-English elements in the Scottish nobility. Many believe that James IV was planning to or had already secretly married Drummond, and her death was necessary in order to allow or force the King to marry the English princess Margaret Tudor, daughter of Henry VII of England and Elizabeth of York. The (comparatively recent) plaque on her grave in Dunblane Cathedral claims that she was commonly believed to be "privately married" to the king, and that she was murdered by Scottish nobles who supported the English marriage.

Furthermore, the "Marriage of the Rose and Thistle", as the poet William Dunbar described it, brought about the Union of the Crowns exactly 100 years later, as it enabled their great-grandson James VI of Scotland to claim the English throne upon the death of Elizabeth I through his descent from Henry VII.

Had James IV married Margaret Drummond instead of Margaret Tudor, the Union of the Crowns might never have taken place and Scotland might have remained an independent country. This idea has been the theme of numerous historical novels and popular histories.

Serious historians are skeptical of the theory. It is not supported by the contemporary evidence, and originates in a history of the Drummond family written by Viscount Strathallan in 1681. Her death was probably a case of accidental food poisoning, a common cause of death at that time. The idea that James had to be pressured to marry Margaret Tudor is dubious. As Scotland was the less important and poorer country, it is more likely that James IV pressured Henry VII to give him his daughter. It is also clear that negotiations for the marriage had been taking place before Margaret Drummond died.