MMCC was founded in 1903 as one of the four colleges of the Carnegie Institute of Technology (CIT). Andrew Carnegie, the founder of CIT, named the college after his mother. MMCC's principal aim would be to train young women to earn their livelihood.[2]

Of the goals of the college, Eileen McConomy, steering committee chairperson of the MMCC Centennial, stated, "although some of the major disciplines available to us may seem archaic to current students, for our era they were relevant [...] our education was rigorous. Our women professors were the forerunners of the feminist movement and inspired us to take charge of our lives, to not be afraid to speak out for what we believed was right, and to demand excellence in all that we did."[2]

Margaret Morrison Carnegie College closed in 1973 due to declining enrollment: "Entering on the coattails of the 1950s were societal and institutional changes that would ultimately seal the fate of MMCC. Homemaking was less apt to be considered a profession; women students were turning increasingly to careers based in the liberal arts and sciences. A steadily climbing enrollment in these fields led to the integration of many MMCC programs into Tech’s other schools."[2] 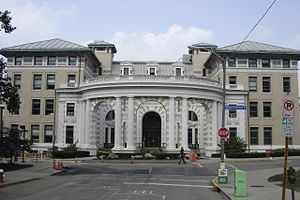