Margaret Theresa of Spain (Spanish: Margarita Teresa, German: Margarete Theresia; 12 July 1651 – 12 March 1673) was Holy Roman Empress, German Queen, Archduchess consort of Austria, Queen consort of Hungary and Bohemia. She was the daughter of King Philip IV of Spain and his second wife Mariana of Austria. She was the elder sister of Charles II, the last of the Spanish Habsburgs. She is the central figure in the famous Las Meninas by Diego Velázquez, and subject of many of his later paintings. 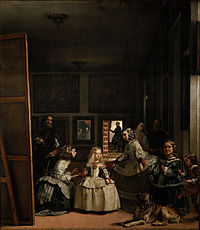 For political reasons, Margaret Theresa was betrothed as a child to her maternal uncle and paternal cousin, Leopold I, Holy Roman Emperor. Her father stipulated that she should maintain her position in the line of succession to the Spanish throne and would pass her succession rights to her descendants, something Leopold I gladly accepted.[citation needed]

In the summer of 1666, saddened by her father's death on 17 September 1665, the 15-year-old infanta left her native Spain and traveled to Austria. She was accompanied by several Spanish attendants, and was solemnly welcomed by her future husband, her uncle Leopold. Their wedding took place in the city of Vienna, on 12 December 1666. Despite the difference in their ages, some 11 years, they were very happy together, as they shared a number of interests, especially theatre and music.[citation needed]

After giving birth to four children, and weakened by many miscarriages, Margaret Theresa died at the age of 21. Her only surviving child was Archduchess Maria Antonia of Austria, future Electress of Bavaria. Margaret Theresa was buried in the Imperial Crypt, in Vienna.

Margaret Theresa and Leopold were parents to four children:

One of the diamonds of Margaret Theresa was auctioned at Christie's in December 2008. Referred to as the Wittelsbach Diamond, it was given by her father king Philip IV of Spain as part of the dowry when she married Leopold I of Austria at the age of 15.[1] The diamond was obtained in India (as it was custom from the Royal Families at that time to bring their diamonds from India, either Hyderabad or Bihar). As of today, it is one of the few lasting Indian diamonds together with the Kohinoor (today part of the British Crown Jewels), the Régent (today in the Louvre), the Orlov (in the Kremlin) or the Hope Diamond, in the Smithsonian Institution in Washington DC.

Margaret Theresa is the blonde princess depicted in the Spanish painter Diego Velázquez' masterpiece Las Meninas ("The Maids of Honor", 1656), where she is surrounded by her ladies-in-waiting and other persons of the Spanish court.

There are other pictures of her, also painted by Velázquez at various stages of her childhood, where she is shown wearing Baroque dresses, which were typical of the court of Madrid during the Spanish Golden Age. These portraits were usually sent by King Philip IV to the court of Vienna in order to keep Leopold apprised of how young Margaret Theresa looked and how she was doing at the distant Spanish court.

Margaret Theresa also features in a number of Pablo Picasso's 58 interpretations of Diego Velázquez' Las Meninas, which he produced between August and December 1957. These currently occupy the Las Meninas room of the Museu Picasso in Barcelona, Spain.