Margaret of Austria, Duchess of Savoy 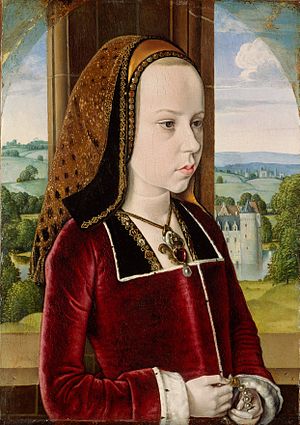 Margaret was born on 10 January 1480, as the second child and only daughter of Maximilian of Austria and Mary of Burgundy, co-sovereigns of the Low Countries. She was named after her stepgrandmother, Margaret of York, Dowager Duchess of Burgundy, who was especially close to Duchess Mary. In 1482, Margaret's mother died and her older brother, Philip the Handsome, at that time three years of age, succeeded her as sovereign of the Low Countries, with his father Maximilian as his regent.

In 1482, her father and the King Louis XI of France signed the Treaty of Arras, whereby her father promised to give Margaret's hand in marriage to Louis's son Charles. The engagement took place in 1483. Margaret, with Franche-Comté and Artois as her dowry, was transferred to the guardianship of King Louis XI of France, who died soon after. She was educated at the French royal court and prepared for her future role as queen of France. She was raised as a fille de France by Madame de Segré, under the supervision of her fiancé's sister and regent, Anne of France. Several French noble children had their education overseen by Anne as well, amongst which Louise of Savoy,[1] with whom she would later negotiate peace. 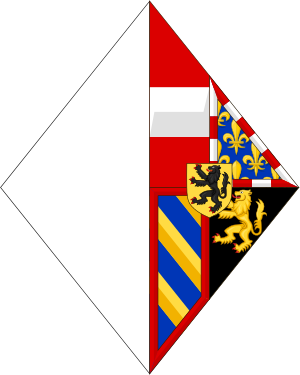 Margaret developed genuine affection for Charles. However, in the autumn of 1491, he renounced the treaty and married Margaret's stepmother[note 1] Anne, Duchess of Brittany, for political reasons. The French court had ceased treating Margaret as queen early in 1491. The Duchess of Brittany had been married to Margaret's father by proxy but their marriage was annulled. Margaret was not returned to her stepgrandmother's court until June 1493, after the Treaty of Senlis had been signed in May that year. Margaret was hurt by Charles's action and was left with a feeling of enduring resentment towards France.[citation needed] 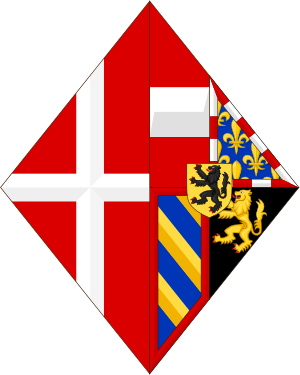 In order to achieve an alliance with Queen Isabella I of Castile and King Ferdinand II of Aragon, Maximilian started negotiating the marriage of their only son and heir, John, Prince of Asturias, to Margaret, as well as the marriage of their daughter, Joanna, to Philip. Margaret left the Netherlands for Spain late in 1496. The marriage took place in 1497. John died after only six months, on 4 October. Margaret was left pregnant, but on 2 April 1498 she gave birth to a premature stillborn daughter.[2] The Dowager Princess of Asturias returned to the Netherlands early in 1500, when her brother and sister-in-law invited her to be godmother to their newborn son, Charles of Austria.

In 1501, Margaret married Philibert II, Duke of Savoy (1480–1504), who died three years later. This marriage had been childless as well. After his death, she vowed never to marry again. Her court historian and poet Jean Lemaire de Belges gave her the title "Dame de deuil" (Lady of Mourning).[3]

During a remarkably successful career lasting from 1506 until her death in 1530, Margaret broke new ground for women rulers. After the early death of her brother Philip of Spain, in November 1506 she became the only woman elected as its ruler by the representative assembly of Franche-Comté (her title was confirmed in 1509). Her father Emperor Maximilian named her governor of the Low Countries and guardian of her young nephew Charles (the future Charles V, Holy Roman Emperor) in 1507. From her newly built palace at Mechelen, Margaret acted as intermediary between her father and her nephew's subjects in the Netherlands, negotiated a treaty of commerce with England favorable to the Flemish cloth interests, and played a role in the formation of the League of Cambrai (1508). After his majority in 1515, Charles rebelled against her influence, but he soon recognized her as one of his wisest advisers, and –the only regent ever re-appointed indefinitely by the ruler who dismissed her– she was again governor of the Netherlands (1519–30) intermittently[citation needed] until her death. In 1529, together with Louise of Savoy, she negotiated the Treaty of Cambrai, the so-called Ladies' Peace.

Her reign was a period of relative peace and prosperity for the Netherlands, although the Protestant Reformation started to take root, especially in the northern Netherlands. The first Protestant martyrs were burnt at the stake in 1523. She had some difficulty in keeping Duke Charles of Guelders under control. She could have made him sign the Treaty of Gorinchem in 1528, but the problem was not conclusively dealt with during her reign.

Patroness of the arts 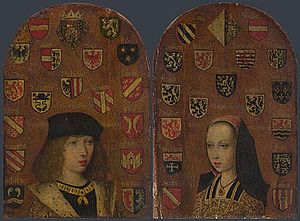 Margaret had received a fine education. She played several instruments, was well read and wrote poetry. Her court at Mechelen was visited by the great humanists of her time, including Erasmus.[4] She possessed a rich library, consisting mostly of missals, historical and ethical treatises (which included the works of Christine de Pizan) and poetry. It included the famous illuminated Très Riches Heures du duc de Berry.[5] She ordered several splendid music manuscripts from Pierre Alamire[6] to send them as gifts to members and her family and to her political relations, and possessed several Chansonniers herself.[7] They contained works by Josquin des Prez, Johannes Ockeghem, Jacob Obrecht and Pierre de la Rue, who was her favourite composer. She kept several painters at her court, including the Master of the Legend of the Magdalen and Pieter van Coninxloo. 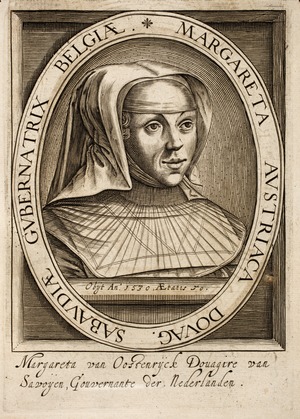 Engraving of Margaret of Austria

She died at Mechelen, after appointing her nephew, Charles V, as her universal and sole heir. She is buried at Bourg-en-Bresse, in the magnificent mausoleum that she ordered for her second husband and herself.

There is a statue of her next to the cathedral of Mechelen.