Margaret of France, Queen of England

From Infogalactic: the planetary knowledge core
Jump to: navigation, search
For other people of the same name, see Margaret of France (disambiguation).
Not to be confused with Margaret of France, Queen of England and Hungary.

Her father died when she was three years old and she grew up under guidance of her mother and Joan I of Navarre, her half-brother King Philip IV's wife.[2]

The death of Edward's beloved first wife, Eleanor of Castile, at the age of 49 in 1290, left him reeling in grief. However, it was much to Edward's benefit to make peace with France to free him to pursue his wars in Scotland. Additionally, with only one surviving son, Edward was anxious to protect the English throne with additional heirs. In summer of 1291, the English king had betrothed his son and heir, the future Edward II, to Blanche of France, half-sister to the French King Philip IV, in order to achieve peace with France. However, hearing of her renowned beauty, Edward decided to have his son's bride for his own and sent emissaries to France. Philip agreed to give Blanche to Edward on the conditions that a truce would be concluded between the two countries, and that Edward would give up the province of Gascony.

Edward agreed, and sent his brother Edmund Crouchback, Earl of Lancaster, to fetch the new bride. Edward had been deceived, for Blanche was to be married to Rudolph III of Habsburg, the eldest son of King Albert I of Germany. Instead, Philip offered her younger sister Margaret to marry Edward (then 55). Upon hearing this, Edward declared war on France, refusing to marry Margaret. After five years, a truce was agreed upon under the influence of Pope Boniface VIII. A series of treaties in the first half of 1299 provided terms for a double marriage: Edward I would marry Margaret and his son would marry Isabella of France, Philip's youngest surviving child. Additionally, the English monarchy would regain the key territory of Guienne and receive £15,000 owed to Margaret as well as the return of Eleanor of Castile's lands in Ponthieu and Montreuil as a dower first for Margaret, and then Isabella.[3] 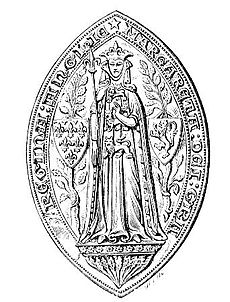 Edward was then 60 years old, at least 40 years older than his bride. The wedding took place at Canterbury on 8 September 1299. Margaret was never crowned, being the first uncrowned queen since the Conquest. This in no way lessened her dignity as the king's wife, however, for she used the royal title in her letters and documents, and appeared publicly wearing a crown even though she had not received one during a formal rite of investiture.[5]

Edward soon returned to the Scottish border to continue his campaigns and left Margaret in London, but she had become pregnant quickly after the wedding. After several months, bored and lonely, the young queen decided to join her husband. Nothing could have pleased the king more, for Margaret's actions reminded him of his first wife Eleanor, who had had two of her sixteen children abroad.

In less than a year Margaret gave birth to a son, Thomas of Brotherton who was named after Thomas Becket, since she had prayed to him during her pregnancy. That Margaret was physically fit was demonstrated by the fact that she was still hunting when her labour pains started.[6]

The next year she gave birth to another son, Edmund.

It is said[who?] that many who fell under the king's wrath were saved from too stern a punishment by the queen's influence over her husband, and the statement, Pardoned solely on the intercession of our dearest consort, queen Margaret of England, appears. In 1305, the young queen acted as a mediator between her step-son and husband, reconciling the heir to his aging father, and calming her husband's wrath.[7]

She favored the Franciscan order and was a benefactress of a new foundation at Newgate. Margaret employed the minstrel Guy de Psaltery and both she and her husband liked to play chess.[8] She and her stepson, the future king Edward II (who was two years younger than she), also became fond of each other: he once made her a gift of an expensive ruby and gold ring, and she on one occasion rescued many of the Prince's friends from the wrath of the King.

The mismatched couple were blissfully happy. When Blanche died in 1305 (her husband never became Emperor), Edward ordered all the court to go into mourning to please his queen. He had realised the wife he had gained was "a pearl of great price" as Margaret was respected for her beauty, virtue, and piety. The same year Margaret gave birth to a girl, Eleanor, named in honour of Edward's first wife, a choice which surprised many, and showed Margaret's unjealous nature.

When Edward went on summer campaign to Scotland in 1307, Margaret accompanied him, but he died in Burgh by Sands. 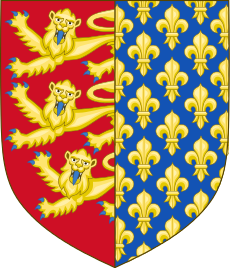 Arms of Margaret of France as Queen of England.

Margaret never remarried after Edward's death in 1307, despite being only 26 when widowed. She was alleged to have stated that "when Edward died, all men died for me".

Margaret was not pleased when Edward II elevated Piers Gaveston to become Earl of Cornwall upon his father's death, since the title had been meant for one of her own sons.[9] She attended the new king's wedding to her half-niece, Isabella of France, and a silver casket was made with both their arms. After Isabella's coronation, Margaret retired to Marlborough Castle (which was by this time a dower house), but she stayed in touch with the new Queen and with her half-brother Philip IV by letter during the confusing times leading up to Gaveston's death in 1312. Margaret, too, was a victim of Gaveston's influence over her step-son. Edward II gave several of her dower lands to the favourite, including Berkhamsted Castle. In May 1308, an anonymous informer reported that Margaret had provided ₤40,000 along with her brother, Philip IV, to support the English barons against Gaveston.[10] Due to this action, Gaveston was briefly exiled and Margaret remained fairly unmolested by the upstart until his death in June 1312.

She was present at the birth of the future Edward III in November 1312.

On 14 February 1318 she died in her castle at Marlborough. Dressed in a Franciscan habit, she was buried at Christ Church Greyfriars in London, a church she had generously endowed. Her tomb, beautifully carved, was destroyed during the Reformation.[11]

In all, Margaret gave birth to three children:[12]