Margaret of Parma (28 December 1522 – 18 January 1586) was Governor of the Netherlands from 1559 to 1567 and from 1578 to 1582. She was the illegitimate daughter of the then 22-year-old Holy Roman Emperor Charles V and Johanna Maria van der Gheynst. She was a Duchess of Florence and a Duchess of Parma and Piacenza by marriage. 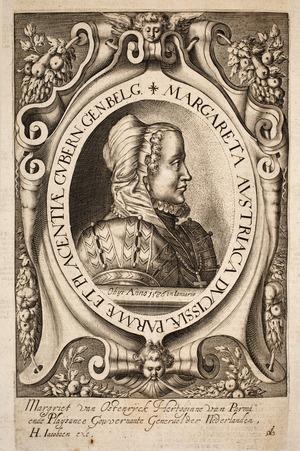 Engraving of Margaret of Parma

Her mother, Johanna Maria van der Gheynst, a servant of Charles de Lalaing, Seigneur de Montigny, was a Fleming. Margaret was brought up by the Douwrin family, under the supervision of two powerful Spanish and Austrian Habsburg Imperial family relatives, her great-aunt, the Archduchess Margaret of Austria, and her aunt Mary of Austria, who were successive governors of the Netherlands from 1507 to 1530 and from 1530 to 1555, respectively. In 1529, Margaret was acknowledged by her father and allowed to assume the name Margaret of Austria, and in 1533, the 11-year-old girl was brought to live to the north of Italy. Though she was multi-lingual, she was to prefer the Italian language for the rest of her life.

In 1527, in the year she turned five, she became engaged to the Pope's nephew, Alessandro de' Medici, Duke of Florence, to assist her father's ambition in gaining influence in Italy. The marriage negotiations had been initiated in 1526, and in 1529 the agreement was officially signed by her father and the Pope. In 1536, she married her betrothed, but he was assassinated in 1537. On 4 November 1538, the 15-year-old widow married Ottavio Farnese, Duke of Parma, the 14-year-old grandson of Pope Paul III. She did not wish to marry him, preferring instead to marry Florence-born Cosimo de' Medici instead.[citation needed] The union, which proved an unhappy one, produced twin sons, one of whom died in infancy. The couple lived periodically separated lives. She was in a somewhat difficult position, as the Pope and the Emperor argued about the authority over Parma. In 1555, the Farnese family were acknowledged as rulers of Parma by Spain in exchange for the custody of her son.

In 1555, she left Italy for the Netherlands, where she left her son in the care of her half-brother Philip II. Like her aunts who trained her, Margaret had many abilities. Philip II appointed her governor of the Netherlands when he left them in 1559 for Spain. In ordinary times she could probably have proved as successful a ruler as her two predecessors in that post, but her task was very different from theirs. She had to face the rising storm of discontent against the Inquisition and Spanish despotism, and Philip left her but nominal authority. He was determined to pursue his own arbitrary course, and the issue was the revolt of the Netherlands. Until 1564, she was forced to adjust herself to the advice of Cardinal Granvelle, who was greatly disliked in the Netherlands, and after he left, she was forced to have every task approved by her brother Philip, despite the fact that a letter from Netherlands and Spain could take months to reach its recipient. In 1565, an opposition party was forged. She received its complaints, and promised to stop religious repression, as she had no army to put against them. In 1566, Iconoclastic riots took place all over the Netherlands; she managed to stop them, but the next year, Philip sent her military help with the Duke of Alba. She warned that Alba's actions would lead to catastrophe, but decided to resign when she noted that his power of attorney from Philip was bigger than her own.

In 1567 Margaret resigned her post into the hands of the Duke of Alba and retired to L'Aquila in Italy. She was appointed governor of Abruzzo, and acted as the adviser of her son and also her royal bastard half-brother, John of Austria. Moreover, in 1578, her son Alexander Farnese was appointed to the office of governor-general of the Netherlands; Philip appointed her his co-regent, with the thought that they would balance each other. However, they were unable to work together, and Margaret had to retire to Namur in 1582. She was given permission by Philip to return to Italy in 1583. She died in Ortona in 1586 and was buried in the church of S. Sisto in Piacenza.

She had two sons with her second husband Ottavio: