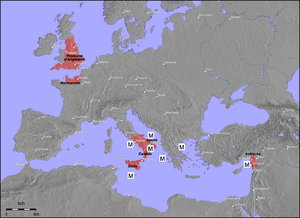 Europe, with 12th-century Norman possessions in color, and M marking points of action of Margaritus of Brindisi

Margaritus of Brindisi (also Margarito; Italian Margaritone or Greek Megareites or Margaritoni [Μαργαριτώνη]: c. 1149 – 1197), called the new Neptune, was the last great ammiratus ammiratorum (Grand Admiral) of Sicily. Following in the footsteps of Christodulus, George of Antioch, and Maio of Bari, Margaritus led the fleets of the kingdom in the reigns of William II (1166–1189) and Tancred (1189–1194). He probably began as a Greek pirate and gradually rose to the rank of privateer before becoming a permanent admiral of the navy. In 1185, he became the first count palatine of Cephalonia and Zakynthos (or Zante). In 1192, he became the first count of Malta. He also held the titles of Prince of Taranto and Duke of Durazzo.

Margaritus first appears as a leader of the fleet alongside Tancred, then just count of Lecce, which took Cephalonia and the Ionian Islands in 1185 and then harassed Isaac Comnenus' Cyprus and captured many of his ships, taking them back to Sicily. In Autumn 1187, King William sent him with a fleet to the Holy Land, where, on 2 October, Saladin had captured Jerusalem. Margaritus, with 60 ships and 200 knights, patrolled the Palestine coast constantly, preventing Saladin from taking any of the vital seaports of the Latin crusader kingdom. In July 1188, he arrived at Tripoli and forced Saladin to raise the siege of Krak des Chevaliers. Something similar happened at Marqab, Latakia, and Tyre in the following year. On 11 November 1189, William died and his fleet returned. On 4 October 1190, Margaritus, the strategos Jordan du Pin, and many other nobles of Messina were forced to flee when Richard the Lion-Hearted, king of England, sacked the city and burnt it. Margaritus took little part thereafter in the Third Crusade. 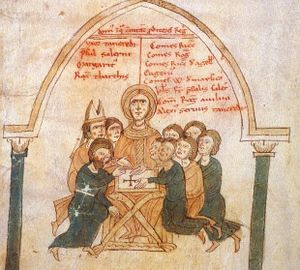 Margaritus with Sibylla and the alleged plotters

Margaritus was a staunch supporter of Tancred against the king of Germany, Henry VI. Tancred created him the first count of Malta sometime in 1192. Henry besieged Naples in 1191 and Margaritus came to the city's defence. He harassed Henry's Pisan navy and nearly destroyed the late-arriving Genoese contingent and kept the harbour approaches open. The war for the kingdom, however, was not given up. Henry sent a second, more powerful navy—mostly Pisan and Genoese—to Naples under the command of Markward von Anweiler. The fleet was augmented by fifty galleys from the Lionheart, forced to promise his support as part of the conditions of his release from a German prison. It landed in the Neapolitan bay on 25 August 1194; Naples surrendered. Next Palermo, where Margaritus defended the citadel, surrendered on November 20. Margaritus and many nobles of the old guard, including Nicholas, Archbishop of Salerno, the son of Matthew of Ajello, and Tancred's widow, Sibylla of Acerra, and brief successor, William III, were present at the Christmas coronation. However, four days later, they were arrested on charges of conspiracy and sent to Germany. There he died in 1197.

The signature of Margaritus of Brindisi

He married Marina, the illegitimate daughter of Roger II of Sicily. By her he had two known children: