From Infogalactic: the planetary knowledge core
Jump to: navigation, search
This article is about the statistical precision of estimates from sample surveys. For safety margins in engineering, see Factor of safety. For tolerance in engineering, see Tolerance (engineering). For the eponymous movie, see Margin for error (film). 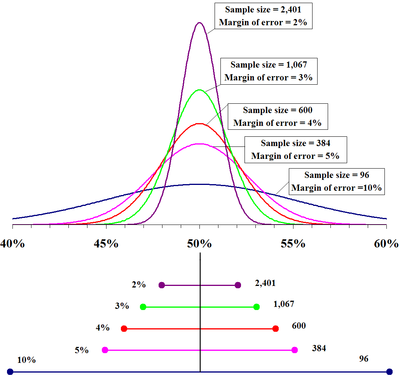 The top portion of this graphic depicts probability densities that show the relative likelihood that the "true" percentage is in a particular area given a reported percentage of 50%. The bottom portion shows the 95% confidence intervals (horizontal line segments), the corresponding margins of error (on the left), and sizes of unbiased samples (on the right). In other words, for each sample size, one is 95% confident that the "true" percentage is in the region indicated by the corresponding segment. The larger an unbiased sample is, the smaller its margin of error.

Margin of error is often used in non-survey contexts to indicate observational error in reporting measured quantities. In astronomy, for example, the convention is to report the margin of error as, for example, 4.2421(16) light-years (the distance to Proxima Centauri), with the number in parentheses indicating the expected range of values in the matching digits preceding; in this case, 4.2421(16) is equivalent to 4.2421 ± 0.0016.[1] The latter notation, with the "±", is more commonly seen in most other science and engineering fields.

An example from the 2004 U.S. presidential campaign will be used to illustrate concepts throughout this article. According to an October 2, 2004 survey by Newsweek, 47% of registered voters would vote for John Kerry/John Edwards if the election were held on that day, 45% would vote for George W. Bush/Dick Cheney, and 2% would vote for Ralph Nader/Peter Camejo. The size of the sample was 1,013.[2] Unless otherwise stated, the remainder of this article uses a 95% level of confidence.

Polls basically involve taking a sample from a certain population. In the case of the Newsweek poll, the population of interest is the population of people who will vote. Because it is impractical to poll everyone who will vote, pollsters take smaller samples that are intended to be representative, that is, a random sample of the population.[3] It is possible that pollsters sample 1,013 voters who happen to vote for Bush when in fact the population is evenly split between Bush and Kerry, but this is extremely unlikely (p = 0.51013 ≈ 1.1 × 10−305) given that the sample is random.

Sampling theory provides methods for calculating the probability that the poll results differ from reality by more than a certain amount, simply due to chance; for instance, that the poll reports 47% for Kerry but his support is actually as high as 50%, or is really as low as 44%. This theory and some Bayesian assumptions suggest that the "true" percentage will probably be fairly close to 47%. The more people that are sampled, the more confident pollsters can be that the "true" percentage is close to the observed percentage. The margin of error is a measure of how close the results are likely to be.

However, the margin of error only accounts for random sampling error, so it is blind to systematic errors that may be introduced by non-response or by interactions between the survey and subjects' memory, motivation, communication and knowledge.[4]

This section will briefly discuss the standard error of a percentage, the corresponding confidence interval, and connect these two concepts to the margin of error. For simplicity, the calculations here assume the poll was based on a simple random sample from a large population.

The standard error of a reported proportion or percentage p measures its accuracy, and is the estimated standard deviation of that percentage. It can be estimated from just p and the sample size, n, if n is small relative to the population size, using the following formula:[5]

When the sample is not a simple random sample from a large population, the standard error and the confidence interval must be estimated through more advanced calculations. Linearization and resampling are widely used techniques for data from complex sample designs.

The margin of error for a particular statistic of interest is usually defined as the radius (or half the width) of the confidence interval for that statistic.[6][7] The term can also be used to mean sampling error in general. In media reports of poll results, the term usually refers to the maximum margin of error for any percentage from that poll.

For a simple random sample from a large population, the maximum margin of error is a simple re-expression of the sample size n. The numerators of these equations are rounded to two decimal places.

Margin of error at 99% confidence

Margin of error at 95% confidence

Margin of error at 90% confidence

Margin of error at X confidence

Maximum and specific margins of error

While the margin of error typically reported in the media is a poll-wide figure that reflects the maximum sampling variation of any percentage based on all respondents from that poll, the term margin of error also refers to the radius of the confidence interval for a particular statistic.

The formula above for the margin of error assume that there is an infinitely large population and thus do not depend on the size of the population of interest. According to sampling theory, this assumption is reasonable when the sampling fraction is small. The margin of error for a particular sampling method is essentially the same regardless of whether the population of interest is the size of a school, city, state, or country, as long as the sampling fraction is less than 5%.

In cases where the sampling fraction exceeds 5%, analysts can adjust the margin of error using a "finite population correction", (FPC) to account for the added precision gained by sampling close to a larger percentage of the population. FPC can be calculated using the formula:[8]

Analysts should be mindful that the samples remain truly random as the sampling fraction grows, lest sampling bias be introduced.

Confidence intervals can be calculated, and so can margins of error, for a range of statistics including individual percentages, differences between percentages, means, medians,[9] and totals.

In a plurality voting system, where the winner is the candidate with the most votes, it is important to know who is ahead. The terms "statistical tie" and "statistical dead heat" are sometimes used to describe reported percentages that differ by less than a margin of error, but these terms can be misleading.[10][11] For one thing, the margin of error as generally calculated is applicable to an individual percentage and not the difference between percentages, so the difference between two percentage estimates may not be statistically significant even when they differ by more than the reported margin of error. The survey results also often provide strong information even when there is not a statistically significant difference.

When comparing percentages, it can accordingly be useful to consider the probability that one percentage is higher than another.[12] In simple situations, this probability can be derived with 1) the standard error calculation introduced earlier, 2) the formula for the variance of the difference of two random variables, and 3) an assumption that if anyone does not choose Kerry they will choose Bush, and vice versa; they are perfectly negatively correlated. This may not be a tenable assumption when there are more than two possible poll responses. For more complex survey designs, different formulas for calculating the standard error of difference must be used.

The standard error of the difference of percentages p for Kerry and q for Bush, assuming that they are perfectly negatively correlated, follows:

Given the observed percentage difference p − q (2% or 0.02) and the standard error of the difference calculated above (.03), any statistical calculator may be used to calculate the probability that a sample from a normal distribution with mean 0.02 and standard deviation 0.03 is greater than 0.