From Infogalactic: the planetary knowledge core
Jump to: navigation, search
This article is about the British prima ballerina assoluta. For the medieval trouvère, see Dames Margot and Maroie.

Dame Margot Fonteyn de Arias, DBE (18 May 1919 – 21 February 1991), was an English ballerina.[1] She is widely regarded as one of the greatest classical ballet dancers of all time. She spent her entire career as a dancer with The Royal Ballet, eventually being appointed Prima Ballerina Assoluta of the company by Queen Elizabeth II.

Fonteyn was born Margaret Evelyn Hookham on 18 May 1919 in Reigate, Surrey to a British father and a half-Irish half-Brazilian mother. Her mother's father was a Brazilian industrialist Antonio Fontes. Very early in her career Margaret transformed "Fontes" into "Fonteyn" (a surname her brother also adopted) and Margaret into Margot. Among her father's family were people in literature and music, but he was an engineer.[2]

At four years of age her mother signed her up for ballet classes with her older brother. At age eight, Margot made the long journey to China with her mother and father, who had taken employment with a tobacco company there; her brother Felix remained at his school. For six years Margot lived in TianJin, then Shanghai, where she studied ballet with Russian émigré teacher George Goncharov. Her mother brought her back to London when she was 14, to pursue a ballet career. Continuing to work in Shanghai, her father was interned during World War II by the invading Japanese.[3]

In 1933 she joined the Vic-Wells Ballet School, the predecessor of today's Royal Ballet School, training under the direction of Ninette de Valois and such teachers as Olga Preobrajenska and Mathilde Kschessinska [Krzesinska]. After starting with the Vic-Wells Ballet, she rose quickly through the ranks of the company. By 1939, Fonteyn had performed principal roles in Giselle, Swan Lake and The Sleeping Beauty and was appointed Prima Ballerina. She was most noted in the ballets of Sir Frederick Ashton, including Ondine, Daphnis and Chloe, and Sylvia. She was especially renowned for her portrayal of Aurora in Tchaikovsky's The Sleeping Beauty. (Televised versions of Sleeping Beauty and Ashton's version of Cinderella are now available on DVD). Fonteyn also worked with choreographer Roland Petit and, later in life, Martha Graham. In 1949 when the Royal Ballet toured the United States, Fonteyn instantly became a celebrity for her performances.[4]

In the 1940s she and Robert Helpmann formed a very successful dance partnership, and they toured together for several years. In the 1950s, she danced regularly with Michael Somes (they had first danced together in 1938, when they created Constant Lambert's Horoscope). In 1955 they danced together in the first ever colour telecast of a ballet, NBC's production of The Sleeping Beauty. In 1958 they appeared together in the first British televised version of The Nutcracker. She named him the favourite partner of her entire career.[citation needed]

Fonteyn began her greatest artistic partnership at a time when many people (including the head of the Royal Ballet, Ninette de Valois) thought she was about to retire. In 1961, Rudolf Nureyev defected to the West, and on 21 February 1962 he and Fonteyn first performed together in Giselle. She was 42 and he was 24. Their performance was a great success; during the curtain calls Nureyev dropped to his knees and kissed Fonteyn's hand. They created an on-and-offstage partnership that lasted until her retirement in 1979 at age 61, and were lifelong friends. Fonteyn and Nureyev became known for inspiring repeated frenzied curtain calls and bouquet tosses. Sir Frederick Ashton choreographed Marguerite and Armand for them, which no other couple danced until the 21st century. They debuted Kenneth MacMillan's Romeo and Juliet, although MacMillan had conceived the ballet for Lynn Seymour and Christopher Gable. Fonteyn and Nureyev appeared together in the filmed versions of MacMillan's Romeo and Juliet, Swan Lake, Les Sylphides, and the Le Corsaire Pas de Deux.[citation needed]

Despite differences in background and temperament, and a 19-year gap in ages, Nureyev and Fonteyn became close lifelong friends and were famously loyal to each other. Fonteyn would not approve an unflattering photograph of Nureyev. He said about her:

"At the end of 'Lac des Cygnes' when she left the stage in her great white tutu I would have followed her to the end of the world."

The extent of their physical relationship remains unclear; Nureyev said that they had one, while Fonteyn denied it. Her biographer Meredith Daneman agreed with Nureyev.[5] The duo remained close even after she retired to a Panama cattle farm with her husband. She would talk with Nureyev by phone several times a week, although her farmhouse did not have a telephone. When she had to be treated for cancer, he paid many of her medical bills and visited her often, despite his busy schedule as a performer and choreographer. In a documentary about Fonteyn,[which?] Nureyev said that they danced with "one body, one soul" and that Margot was "all he had, only her". An observer said that "If most people are at level A, they were at level Z." (Nureyev had his own health problems as he was HIV positive; he died of AIDS in 1993).[citation needed] 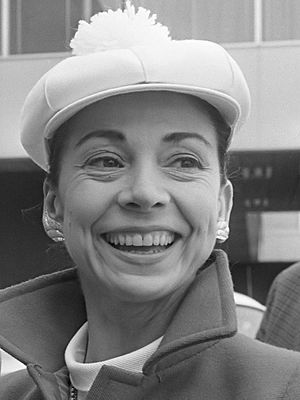 During the late 1930s and early 1940s Fonteyn had a long relationship with composer Constant Lambert. Lambert expressed some aspects of this in his ballet Horoscope (1938).

In 1955 Fonteyn married Dr Roberto Arias, a Panamanian diplomat to London. Their marriage was initially rocky because of his infidelities. She was arrested when Arias attempted a coup d'état against the Panamanian government in 1959.[6] Information released on 28 May 2010 indicated Dame Margot knew of, and at one point was involved in, the coup attempt.[7] In 1964, a rival Panamanian politician shot Arias, leaving him a quadriplegic for the rest of his life.

After her retirement she spent all her time in Panama, and was close to her husband and his children from an earlier marriage. Shortly before her husband's death, in 1989, Fonteyn was diagnosed with a cancer that proved fatal.[6] She died on 21 February 1991 in a hospital in Panama City, Panama, aged 71.[8] 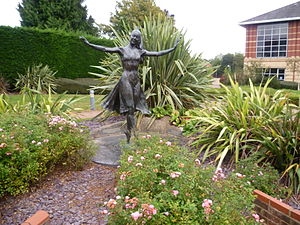 Fonteyn wrote the introduction for Wushu! The Chinese Way to Family Health and Fitness.[12] The book was translated for the Western market by Timothy Tung from a series of official handbooks published in China by The People's Sports Publishing House, Beijing.

The "Margot Fonteyn Academy of Ballet" in Peekskill, New York is named in her honour.[13]

As a dancer she made her last appearance in Nureyev's 1979 summer season, and in February 1986 (aged 66) she appeared on stage for the last time, as 'The Queen' in "The Sleeping Beauty".[14]

Fonteyn and Nureyev starred together in a colour film of Swan Lake in 1967. Under the guidance of director Paul Czinner, they also filmed their famous version of Romeo and Juliet in 1966. Fonteyn presented her own six-part BBC2 series entitled The Magic of Dance in 1975, exploring the history of dance through five centuries, but it seems to have been lost since. The series caused a stir because up to that time she had not been known for speaking on camera. Terry Wogan commented that if that was an amateur speaking then the professionals should take note.

The BBC made a film about Fonteyn in 2009, based on Daneman's biography and starring Anne-Marie Duff as the ballerina. It aired on 30 November 2009.[15]