Maria Alexandrovna (Marie of Hesse and by Rhine)

Marie of Hesse and by Rhine (8 August 1824 – 3 June [O.S. 22 May] 1880) was, under the name Maria Alexandrovna (Russian: Мария Александровна), Empress of Russia as the wife of Emperor Alexander II. She was born in Darmstadt, the capital of the Grand Duchy, and died in Saint Petersburg. The Mariinsky Theatre and the city of Mariehamn in Åland are named after her.

Marie was the youngest of seven children born to the Grand Duchess Wihelmine of Hesse (1788–1836), the youngest sister of the Russian Empress-Consort Elizaveta Alexeievna. The younger four were probably the biological children of Baron August von Senarclens de Grancy, but to avoid a scandal, Ludwig II, Grand Duke of Hesse acknowledged Alexander and Marie as his own children; the other two had died young. 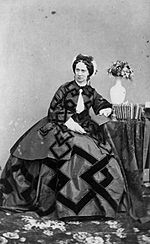 When in 1838, the Tsarevich Alexander Nikolayevich toured Europe to find a wife, he fell in love with the 14-year-old Marie. He married her on 16 April 1841, even though he was well aware of the "irregularity" of her birth. His mother Empress Alexandra Fyodorovna objected, but Alexander insisted.

She was very shy. The damp climate of St. Petersburg did not agree with the delicate chest Marie had inherited from her mother, so that she had a racking cough and recurring fever. Nevertheless, she became the mother of eight children. These pregnancies together with ill health kept her away from many Court festivities, which brought temptations to her husband.

In 1855 Alexander became Emperor, which forced her to attend more State functions whether she was ill or not. Although In 1865, the death of her eldest and favourite son, the Tsarevich Nicholas, was a great blow.

Every now and again she was able to go to her brother Alexander who lived with his morganatic wife in Heiligenberg. There she met Princess Alice, second daughter of Queen Victoria and Prince Albert of Saxe-Coburg-Gotha, wife of her nephew Prince Louis. She resented Alice's suggestion that her brother Prince Alfred, Duke of Edinburgh and Marie's daughter, Maria Alexandrovna marry, but the marriage ultimately went through. When Alice died in 1878, Marie often invited the motherless children for visits to Heiligenberg. It was during these visits that her second youngest son, Grand Duke Sergei, met his future wife, Alice's second daughter, Princess Elisabeth and Maria also met Elisabeth's youngest surviving sister, Princess Alix, who would eventually become the devoted, yet ill-fated, wife of Maria's eldest grandson, Tsar Nicholas II. One legend states that on a visit to Darmstadt, upon meeting Alix, Marie turned to her maid of honor telling her to "kiss her hand. That is your empress to be."[2] In later years Nicholas II’s eldest daughter, the Grand Duchess Olga, claimed to have seen the ghost of her great-grandmother, the Empress Maria Alexandrovna as a small child, according to her nanny, Miss Margaretta Eagar.[3] 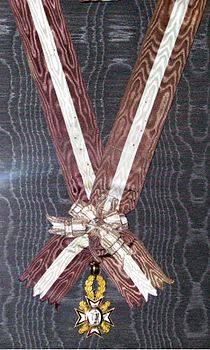 Sash of the Order of Maria Louisa, belonging to the Empress Maria Alexandrovna of Russia.