From Infogalactic: the planetary knowledge core
(Redirected from Maria Anna of Austria (1610-1665))
Jump to: navigation, search

Born in Graz, she was the fifth child and second (but oldest surviving) daughter of Archduke Ferdinand of Inner Austria by his first wife Maria Anna, a daughter of William V, Duke of Bavaria. She was probably named after her mother, who died in 1616.

Maria Anna, who had a particular fondness for hunting, received a strict Jesuit upbringing[1] and was considered a great beauty with exceptional virtues, such as prudence, orderly life and stateliness. She also spoke fluent Italian in addition to her native German.

In 1619 her father became in Holy Roman Emperor and King of Bohemia and Hungary, an event that considerably raised her status. Two years later, in 1622, the now Emperor Ferdinand II married again, with Eleonora, daughter of Vincenzo Gonzaga, Duke of Mantua, with whom he had no children.

On 15 July 1635 at the Augustinian Church, Vienna, Maria Anna married with her uncle, Maximilian I, Elector of Bavaria, whose previous wife, Elisabeth of Lorraine, had died a few months earlier. The wedding was celebrated by Franz von Dietrichstein, Bishop of Olomouc.

In the marriage contract, which was signed two days later on 17 July, the Emperor made the excepcional admission that Maria Anna should not be renounced to her rights over the Habsburg inheritance (Erbverzicht) as was customary for Austrian Archduchesses when they married with foreign princes; this was made probably by Ferdinand II with the intention to secure the rights of his eldest daughter in the case of the extinction of his male descendants. As a dowry, Maria Anna received the amount of 250,000 florins who where secured from Wasserburg Castle and the districts of Kraiburg and Neumarkt. As a widow's seat she received Trausnitz Castle in Landshut.

With this union, the Bavarian Elector not only gained the opportunity to had the long-waited heir (his first marriage was childless) but was a political demonstration of his alliance with the Holy Roman Empire against France, which was prepared for an imminent war. However, this connection only played a minor role in the relations between Austria and Bavaria later. 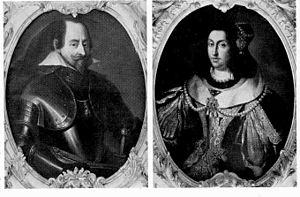 Portraits of Maria Anna and her husband, Maximilian I.

The marriage was very happy and Maximilian I cared for his wife lovingly. During Maria Anna's first pregnancy, the Electoral couple made a pilgrimage to Andechs to pray for a happy birth. On 31 October 1636, the Electress gave birth her first son, who was named Ferdinand Maria after his grandfather Ferdinand II, who also acted as godfather for the child. The childbirth proved to be extremely difficult for Maria Anna; she became so weak that she lost her ability to speak. Her healing was attributed to the help of the relics of Saint Francis of Paola, so Maximilian I founded in Neunburg vorm Wald a monastery consecrated to him.[1] Almost two years later, on 30 September 1638, the Electress gave birth a second son, Maximilian Philipp Hieronymus.

Maria Anna assisted her husband in government affairs and showed interest in the politics of the Bavarian Electorate; she even took part in the meetings of the Council of Ministers.[2] Despite her Habsburg origins (she had an extensive correspondence with her brother Ferdinand III and other relatives), she was completely advocated to the Bavarian standpoint. In addition, she conducted lively exchanges of opinion with high officials of the Munich.

After the conquest of Philipsburg fortress by the French in 1644, Maria Anna urged (on behalf of her husband) to her brother Leopold Wilhelm, who since 1639 was the commander of the Imperial Army to enter in peace negotiations. In 1650 and shortly before his death, Maximilian I had for his wife a Treuherzige Information (Trust information) written and given her guidance for her upcoming regency.[3]

Regent of the Electorate of Bavaria

When Maximilian I wrote his will in 1641, Maria Anna claimed in this for the eventual reign of her son, a co-signature law in national matters. However, the Office of the Administrator in Bavaria and Saxony claimed that according to Golden Bull women are excluded from government. She consulted without her husband's knowledge an expertise commission and finally got the corresponding favorable rule of her rights added in Maximilian I's will. Thus, after Maximilian I's death (27 September 1651) his brother Albert VI, Duke of Bavaria legally became in the Regent for Ferdinand Maria and was confirmed in such position in both Imperial and Electoral courts, but Maria Anna assumed full responsibility for the Department of Justice and other country administrative tasks, who virtually left the Dowager Electress as ruler of Bavaria. In addition to Albert VI and the Dowager Electress, the Hofkammerpräsident Mändl belonged to the administration who continue to work with the young Elector when he attained his majority in 1654.[4]

In 1664 Maria Anna (who remained after the end of her regency as a close advisor of her son) suggested to put the country under the patronage of St. Joseph.[5] After the death of her husband, she lived in the called Widow's floor (Witwenstock) in the southwestern part of the Munich Residenz.[6] Until her death she was a member of the Privy Council, the highest governmental body, although she hadn't the right of voting.[7]

She died in Munich aged 55 and was buried at St. Michael's Church,[8] while her heart was deposited in the Shrine of Our Lady of Altötting.

Maria Anna is a central character in the novel, 1634: The Bavarian Crisis (Eric Flint & Virginia DeMarce. Baen Books.) She escaped marriage to Maximilian and escaped to her cousin, Don Fernando who had declared himself "King in the Low Countries".