Maria Christina Henriette Desideria Felicitas Raineria of Austria [1] (21 July 1858 – 6 February 1929) was Queen of Spain as the second wife of King Alfonso XII. She was regent during the minority of their son, Alfonso XIII, and the vacancy of the throne between her husband's death and her son's birth.

Known to her family as Christa, she was born at Židlochovice Castle (Groß Seelowitz), near Brno, in Moravia, a daughter of Archduke Karl Ferdinand of Austria and his wife, Archduchess Elisabeth Franziska of Austria.

Her paternal grandparents were Archduke Charles of Austria and Princess Henriette Alexandrine of Nassau-Weilburg.

Various sources attributed good traits to Maria Christina before her marriage. One states she was "tall, fair, sensible, and well educated".[2]

Maria Christina married King Alfonso XII of Spain on 29 November 1879 at the Basilica of Atocha in Madrid, and became the mother of his only three legitimate children:

His previous wife was Mercedes of Orléans, who had died half a year after their marriage, leaving no issue. She lived a discreet life as queen. 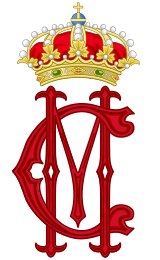 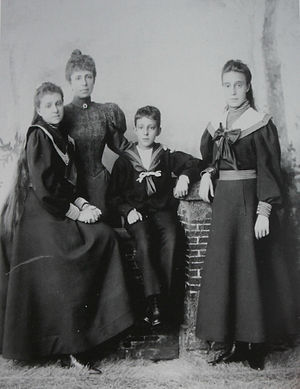 Maria Christina with her three children, 1897.

When the King died, Maria Christina was pregnant, so the throne was vacant, depending on whether Maria Christina's unborn child was a male or a female; a male would make that child king, while a female would place her elder daughter, Infanta María Mercedes, on the throne. During this period, Maria Christina ruled as regent until her child, a son, was born, who was Alfonso XIII of Spain from birth. Maria Christina continued as regent until Alfonso XIII attained his majority in 1902; she is the "Her Majesty the Queen Regent of Spain" named as concluding in the Treaty of Paris (1898) with the United States of America, ending the Spanish–American War.

Her chief adviser and head of government was Práxedes Mateo Sagasta. Her rule is described as well balanced and in accordance with respect for the constitutional rights, and many political reforms were instated during her regency to prevent political conflicts and chaos. Her role was mostly ceremonial, and her purpose was to preserve the crown for her son until he became an adult.

After her son's marriage in 1906, she lost her position as first lady at court. Nevertheless, Alfonso XIII continued to look to her on many occasions for advice.

She was the 805th Dame of the Royal Order of Queen Maria Luisa.

In February 1929, after some weeks of heart disease, she died at the Royal Palace in Madrid and is buried at El Escorial. Sir Charles Petrie, Alfonso XIII's biographer, maintained that the Queen dowager's death had a disastrous effect on her son, and that the latter never recovered politically from the blow. Within little more than two years the monarchy had collapsed.