Maria Christina of the Two Sicilies

Born in Palermo, Sicily on 27 April 1806, she was the daughter of King Francis I of the Two Sicilies by his second wife, Maria Isabella of Spain.

With the death on 27 May 1829 of the third wife of Ferdinand VII of Spain, the Spanish king was in need for a male heir to succeed to the crown. This led to his fourth marriage, just seven months later (11 December 1829), to Maria Christina. If the rushed marriage was not awkward enough, King Ferdinand was also her uncle by both birth and marriage. Maria Christina's mother, Maria Isabella, was King Ferdinand's sister; both were born to King Charles IV of Spain and his wife, Maria Luisa of Parma.

As queen, Maria Christina, rapidly delivered two daughters, the future Queen Isabella II (1830–1904), and the Infanta Luísa Fernanda (1832–1897), and two sons who did not survive past one year.

When Ferdinand died on 29 September 1833, Maria Christina became regent for their daughter Isabella. Isabella's claim to the throne was disputed by her uncle, the Infante Carlos, Count of Molina, who claimed that his brother Ferdinand had unlawfully changed the succession law to permit females to inherit the crown (see Carlism). Some supporters of Don Carlos went so far as to claim that Ferdinand had actually bequeathed the crown to his brother but that Maria Christina had suppressed that fact. It was further alleged that the Queen had signed her dead husband's name to a decree recognizing Isabella as heir.

Carlos' attempt to seize power resulted in the Carlist Wars. Despite considerable support for Carlos from the Roman Catholic Church and conservative elements in Spain, Maria Christina successfully retained the throne for her daughter. The Carlist Wars grew from a dispute about the succession into a dispute over the future of Spain. The supporters of Maria Christina and her daughter favored a liberal constitution and progressive social policies. In contrast, Carlos' supporters (called Carlists) favored a return to traditional society and an absolute monarchy. Ultimately, the army's loyalty to Isabella II proved the decisive issue in the war. 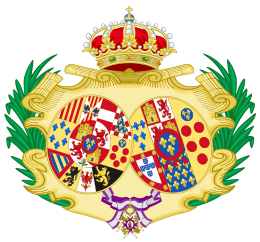 Coat of arms of Maria Christina as Queen Consort

On 28 December 1833, shortly after the death of Ferdinand VII, Maria Christina had secretly married an ex-sergeant from the royal guard, Agustín Fernando Muñoz (1808–1873). Maria Christina and Muñoz had several children together while trying to keep their marriage a secret.[1]

Muñoz enlisted in the royal bodyguard, and attracted the attention of Maria Christina. According to one account, he distinguished himself by stopping the runaway horses of her carriage; according to another, he only picked up her handkerchief; a third explanation of his fortune has been given[citation needed]. Maria Christina's husband, King Ferdinand VII of Spain died on 29 September 1833, and on 28 December 1833 she and Muñoz were privately married.

If Maria Christina had officially made the marriage public, she would have forfeited the regency; but her relations with Muñoz were perfectly well known within the Spanish court. When on 13 August 1836 the soldiers on duty at the summer palace La Granja mutinied and forced the regent to grant a constitution, it was generally, though wrongly, believed that they overcame her reluctance by seizing Muñoz, whom they called her guapo, or fancy man, and threatening to shoot him.

Eventually, news of Maria Christina's marriage to this low-ranking soldier became public. That news made Maria Christina deeply unpopular. Her position was undermined by news of her remarriage and concerns that she was not actually supportive of her liberal ministers and their policies. Eventually, the army, which was the backbone of Isabella II's support, and the liberal leadership in the Cortes combined to demand that Maria Christina stand aside from the regency. In 1840 Maria Christina found her position intolerable; she renounced the regency and left Spain with Muñoz. The army commander, General Baldomero Espartero, Count of Luchana, replaced her as regent. 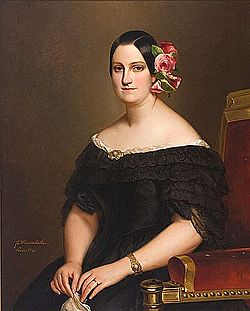 In 1842 Maria Christina purchased the Château de Malmaison as their residence. In 1843, on the overthrow of General Baldomero Espartero they returned to Spain. In 1844, Muñoz's stepdaughter Queen Isabella II was declared to be of age. On 23 June 1844 Isabella gave to Muñoz the title duque de Riánsares, to which was attached a Grandeza de España;[4] the title came from the river Ánsares, near Muñoz's birthplace in Tarancón. On October 12, 1844 Isabella gave official consent to the marriage between her mother and Muñoz, and it was publicly performed. In 1846 Isabella made Muñoz a Knight of the Golden Fleece. On 30 May 1846 she gave Muñoz a second title, marqués de San Agustín.[4] Muñoz was made a Captain General, the highest rank in the Spanish Army. In 1847 Louis Philippe, King of the French, gave Muñoz the title duc de Montmorot; he also invested Muñoz with the Grand Cross of the Légion d'honneur. In 1854, Maria Christina left for France a second time. France remained her primary residence for the remainder of her life.

In 1846, by the express request of the former president Juan José Flores, the Queen participated in an attempt to restore the monarchy in Ecuador. This two-phase plan was first that her son Agustín Muñoz of Bourbon should become King of Ecuador, and later in restorer of the Spanish monarchy in Perú and Bolivia, converting the child in the monarch of the tentative United Kingdom of Ecuador, Perú and Bolivia, with herself and Flores as Regents. When everything was organized, the attempt was denounced by the press and Latin American diplomats, and plans collapsed.[5][6]

Maria Christina's illness returned and she suffered from serious coughing, fainting and fever. She died in Le Havre, France on 22 August 1878. As the widow of Ferdinand VII and the mother of Isabella II, Maria Christina was buried in the royal crypt of El Escorial monastery.